Charter schools have experienced rapid growth in North Carolina in recent years after state lawmakers lifted a cap limiting their numbers. Now the General Assembly is considering legislation that could boost the finances of the schools, which are public but independently run — increasingly by private, for-profit companies — and don't have to adhere to all the regulations that apply to traditional public schools. Charters have a mixed record on academic achievement and have been shown to lead to increased segregation.

Several of the proposed bills that would aid charter schools failed to survive the crossover deadline, when legislation must be passed by one chamber to remain in play. But one did survive — and it's possible that any of the others could be brought back to life by legislative maneuvers.

The measure that survived crossover, Senate Bill 456, would require additional monies from a special fund established in 2010 to be shared with charter schools. It passed the Senate on April 29 and moved on to the House. In reviewing a similar bill, the N.C. Association of School Administrators noted that money from the fund has "already been shared in previous years with [charter schools] when the funds were originally appropriated" and raised concerns that the proposed law would result in charters "double dipping."

The sponsors of Senate Bill 456 — Republicans Jerry Tillman of Archdale and Ronald Rabin, who represents Harnett and Lee counties and parts of Johnson County — did not receive support from groups advocating school privatization in recent election cycles. But the sponsors of the other pro-charter bills did.

The money trail begins at the Walton Family Foundation, the grantmaking organization of the billionaire Wal-Mart founders known for funding charter and private school efforts, and the American Federation for Children (AFC), a 501(c)(4) nonprofit that also advocates for school privatization. Members of the Walton family have given millions of dollars to the AFC, its affiliates and All Children Matter, AFC's predecessor. In turn, these groups fund a trio of pro-school privatization organizations in North Carolina that lobby, give money directly to candidates for state office and make independent political expenditures that indirectly benefit candidates to promote their agenda: expanding charter schools, increasing charter school funding and offering private school vouchers.

Among the lawmakers who have received support from this network are Republicans Rep. Paul Stam of Wake County, speaker pro tempore of the state House and vice chair of the House Appropriations Committee on Education, and Rep. Larry Yarborough of Roxboro.

Stam and Yarborough introduced House Bill 761, titled "Charter School Capital Funds," on April 14. It would allow counties to provide funding to charters for purchase, construction or modification of buildings and other structures such as playgrounds, libraries, auditoriums and gymnasiums, as well as for purchase of furnishings and equipment. To date, public funds have not gone towards charter school campuses in North Carolina. Charter school groups including the North Carolina Public Charter School Association have been seeking this allowance for some time. Critics have raised concerns the bill could lead to another that mandates counties to pay for school facilities. The measure was referred to the House Local Government Committee, where it stalled.

Less than two weeks earlier, Stam and Yarborough introduced House Bill 557; similar to Senate Bill 456, it would allocate additional money to charter schools from a special fund. The bill stalled in the House Appropriations Committee.

One of the North Carolina pro-privatization groups, a 501(c)(4) "social welfare" nonprofit called Partners for Educational Freedom in North Carolina, manages a political action committee that gave Stam $3,250 in the 2011-12 election cycle and another $500 in the 2013-14 cycle. A longtime advocate of school privatization, Stam helped remove the state's cap on charter schools in 2011. He also incorporated "Opportunity Scholarships" — taxpayer-funded vouchers given to students from lower-income families to help pay for private school tuition — into the 2013 state budget. This year Stam is a primary sponsor of House Bill 133 to increase private school voucher allowances for children with disabilities.

Yarborough's campaign benefited from over $24,000 worth of supportive mailers and phone calls from North Carolina Citizens for Freedom in Education IE PAC, an independent political committee that shares its address and some staff with Partners for Educational Freedom and its sister group, a 501(c)(3) nonprofit called Parents for Educational Freedom in North Carolina. Yarborough, a first-term state legislator, is a co-sponsor of House Bill 133, which currently sits in the House Appropriations Committee.

Other primary sponsors of the measure are Republican Rep. Bert Jones of Reidsville, who received $1,500 in campaign contributions from Partners for Educational Freedom in 2012 and $350 in 2014; Republican Rep. Jonathan Jordan of Jefferson, who benefited from over $18,000 in independent expenditures in 2014 from North Carolina Citizens for Freedom in Education IE PAC; and Democrat Cecil Brockman of High Point, whose campaign received $750 from Partners for Educational Freedom in 2014.

Another measure introduced this year, House Bill 535, would allot $2 million in state funds to Parents for Educational Freedom to expand charter schools through its Public Charter School Accelerator; that bill has been referred to the House Committee on Rules, Calendar and Operations. The bill's primary sponsors — Rep. Brockman and Republican Reps. Rob Bryan of Mecklenburg County and Brian Brown of Pitt County — have either received direct campaign contributions from Partners for Educational Freedom or benefited from independent spending by North Carolina Citizens for Freedom in Education IE PAC.

The chart below details the money trail to state House members who have sponsored bills during this legislative session that benefit charters and school privatization. 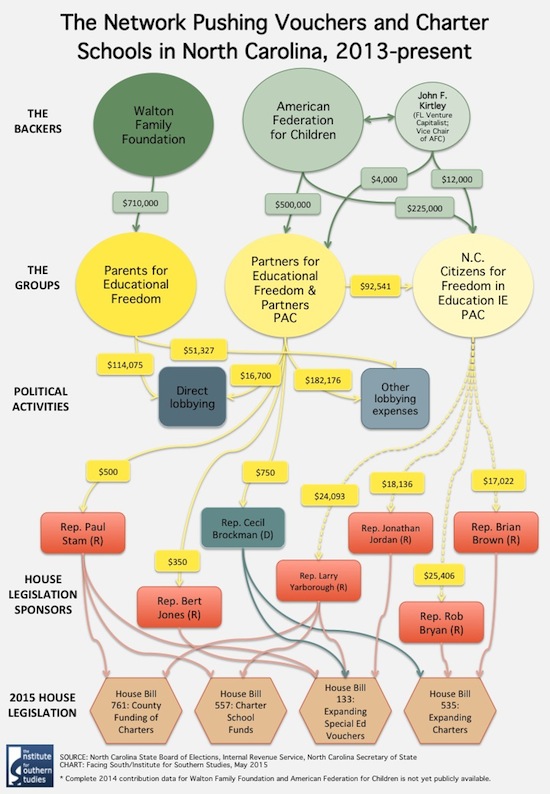