A Confederate battle flag continued flying at full mast over the South Carolina statehouse following Wednesday's mass murder of black churchgoers in Charleston while the U.S. and state flags were lowered, sparking a heated national conversation about the symbol. (Photo by eyeliam via Flickr.)

This isn't the story about a flag, but there's a flag in this story.

On the same day the nation was reeling from the mass murder of nine black churchgoers in South Carolina by a calculating white gunman who reportedly made it clear to his victims the attack was inspired by racial hatred, the U.S. Supreme Court on Thursday issued a ruling saying that the state of Texas is within its right to refuse the depiction of the Confederate flag on personalized license plates issued by the state.

Though unrelated in numerous ways, the stories about a vicious crime in one Southern state and another's legal battle over what can and cannot appear on a license plate are colliding as the two simultaneously touch on the long-simmering debate over the history of slavery and racism in the South — a legacy that lives on in the Confederate flag and what it symbolizes.

Though the court ruling regarding Texas "concerned larger issues of free speech and government sensitivity," the specific challenge was brought by a group, the Sons of Confederate Veterans, who wanted to have the state issue plates depicting the Confederate flag. In the 5-4 ruling, the majority of justices agreed that a license plate is not just "personal speech" but also "government speech" which Texas has a right to control. In favoring the state's argument, the court upheld the Texas decision to reject the specific license plate design because "a significant portion of the public associate the Confederate flag with organizations advocating expressions of hate directed toward people or groups."

Justice Stephen G. Breyer, in announcing the decision, said the ruling produces a "kind of legal symmetry" to a previous ruling by the court that the state cannot compel a motorist to display a message he or she finds objectionable.

Writing for the Guardian, columnist Scott Lemieux explains that the distinction between government and personal speech is an important one,

because while the state generally cannot suppress private speech or favor one private opinion over another, it is not required to endorse or express any particular view. "A person who displays a message on a Texas license plate" instead of a bumper or window sticker, argues Justice Stephen Breyer in his opinion for the Court, "likely intends to convey to the public that the State has endorsed that message." Nor has the pro-Confederate viewpoint been singled out. The state tightly controls the design of the specialty plates and has rejected at least a dozen plate designs, suggesting that the specialty plates are government speech. Texas is not required to give its tacit endorsement to the display of the Confederate flag any more than it is required to approve specialty plates with pornographic images.

Which is where South Carolina comes in.

Outrage is being widely expressed over the fact that even as U.S. and state flags were being flown at half-staff on Thursday across South Carolina in an expression of mourning for the nine victims of the shooting at the Emanuel African Methodist Episcopal Church in Charleston, the Confederate flag flying on the state capitol grounds was still waving at the top of its pole throughout the day. As Kim Bellware reported for the Huffington Post:

The morning after nine people were shot to death Wednesday inside a historic black church in Charleston, South Carolina, flowers were laid, black cloth was draped and flags at the state's Capitol building were lowered to half-staff.

The fact that the Confederate flag was waving high in the state capital of Columbia hours after suspected gunman Dylann Roof carried out what's believed to be a racially motivated attack sparked outrage.

"It's up there," Will Whitson, a Columbia-based state reporter for Raycom Media, told The Huffington Post Thursday afternoon. "One thing is, I don’t think the flag is on a pulley — so even if they wanted to put it at half-staff, they couldn’t. And to remove it from the grounds would require a legislative vote."

A large Confederate flag used to fly over the Capitol dome, along with the American flag and the South Carolina flag, but was removed in 2000. However, a smaller version of the flag still flies on statehouse grounds, next to the Confederate Soldier's Monument.

The flag is held in place by a padlock, State Sen. Vincent Sheheen (D) said.

Regardless of the legal constraints that may have held the flag aloft, wrote Justin Moyer at the Washington Post, "It just didn't look good" for South Carolina. "As a pastor and members of his flock lay dead and the Supreme Court dealt a blow to those who wish to display Confederate flags on license plates in Texas," he continued, "South Carolina seemed to be flaunting its heritage of slavery as the first state to secede from the Union. It was deplorable enough, critics said, that the flag was there in the first place."

Among those saying that the most recent act of terrorism against black people in South Carolina should be taken as an opportunity to relegate the Confederate flag and the hatred it represents to the dustbin of history, was journalist and author Ta-Nehisi Coates, who penned a scathing indictment for The Atlantic with the simple title: "Take Down the Confederate Flag — Now." He wrote:

That the Confederate flag is the symbol of of white supremacists is evidenced by the very words of those who birthed it:

Our new government is founded upon exactly the opposite idea; its foundations are laid, its corner-stone rests, upon the great truth that the negro is not equal to the white man; that slavery subordination to the superior race is his natural and normal condition. This, our new government, is the first, in the history of the world, based upon this great physical, philosophical, and moral truth...

This moral truth — "that the negro is not equal to the white man" — is exactly what animated Dylann Roof. More than any individual actor, in recent history, Roof honored his flag in exactly the manner it always demanded — with human sacrifice.

In less than 24 hours, an online petition calling for the removal of all Confederate flags from state property had garnered more than 65,000 signatures. 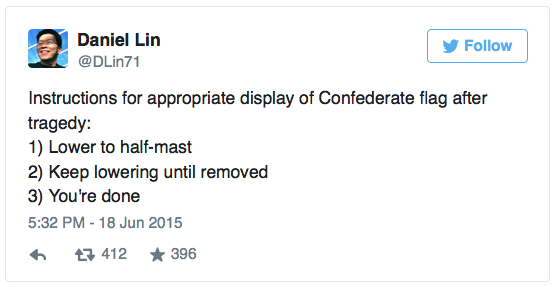 Common Dreams is a nonprofit independent newscenter that has been providing breaking news and views for the progressive community since 1997.

The escalating fight over racist monuments in Southern communities

Busting the myth that Congress made Confederate vets into U.S. vets