Hundreds of supporters of the Affordable Care Act rallied on the steps of the Supreme Court earlier this year as justices heard oral arguments in King v. Burwell. The ruling expected this month will determine the legality of subsidies for health insurance policies purchased on the federal exchange. (Photo by David Sachs/SEIU via Flickr.)

The U.S. Supreme Court is set to rule by the end of this month in King v. Burwell, a case challenging the legality of health insurance subsidies for low- and middle-income residents of the 34 states that use the federal marketplace under the Affordable Care Act. The lawsuit was brought by four residents of Virginia, which is among the states that opted not to set up their own insurance exchanges and instead rely on the federal one.

In all, almost 6.4 million Americans stand to lose their subsidies if the court sides with the plaintiffs and abolishes the federal marketplace. Of those, 4 million or 63 percent live in the South.

Using numbers released by the U.S. Department of Health and Human Services, the Kaiser Family Foundation created an interactive map detailing the data by state, including the number of people at risk of losing their insurance subsidies, the total monthly tax credit dollars a state stands to lose and anticipated percent increase in the average monthly premium without the subsidies.

The data show that a ruling against Obamacare subsidies would most affect the South. Twelve of the 13 Southern states, with the exception of Kentucky, use the federal marketplace. The four states with the most people at risk of losing subsidies are all in the South: Florida, Texas, North Carolina and Georgia. Southern states stand to lose $1.1 billion in subsidies each month — 65 percent of the national total.

And should these subsidies disappear, the percent increase in the average premium in the South (excluding Kentucky) would be 337 percent — well above the national average of 287 percent. 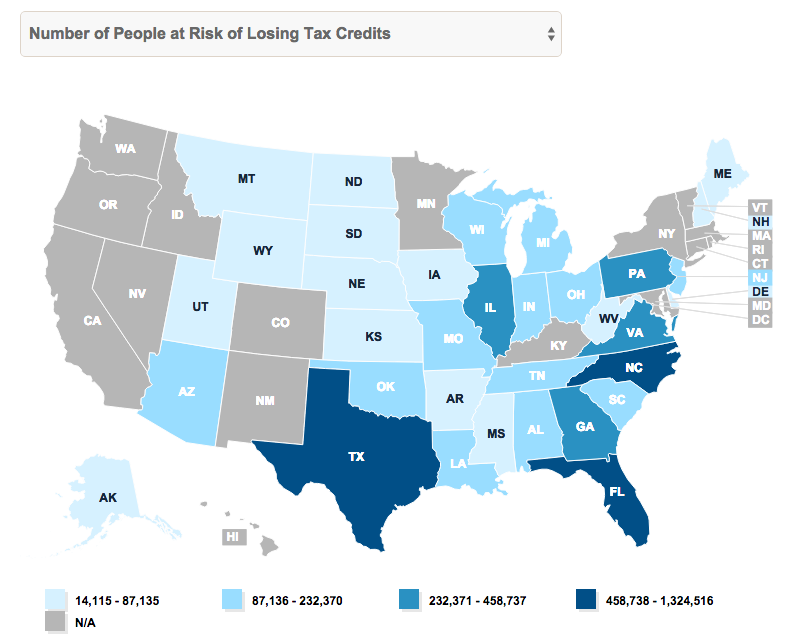 Map by the Kaiser Family Foundation based on data from the U.S. Department of Health and Human Services.