The sponsors of ALEC’s 2015 annual meeting, discovered jointly by the Center for Media and Democracy and Greenpeace, show many companies in the energy industry and from the South. (Source: PR Watch)

Every year, the American Legislative Exchange Council (ALEC), a conservative group that favors “limited government, free markets and federalism” and promotes model state legislation, brings together its corporate and government members for an annual meeting.
Beginning on July 22, this year’s conference in San Diego featured high-level speakers such as Republican presidential candidates Scott Walker, Ted Cruz and Mike Huckabee; small-government evangelist Arthur Laffer; and leading GOP political consultant and Fox News commentator Frank Luntz.
ALEC's annual meeting this year was sponsored by 54 corporations, 22 of them energy companies, firms representing energy interests, or public relations firms and think tanks with ties to energy interests, according to the Center for Media and Democracy’s PRWatch.org. An even larger number of the groups, 31, are headquartered in the South, combining for a total of $585,000 in sponsorship, or more than half of the $1.1 million total from all groups.
The list of sponsoring companies and groups backing ALEC’s reflects those that have stuck with the controversial group after a series of defections in recent years. According to the Center for Media and Democracy, as of April 2015 103 companies including Amazon, Coca-Cola, Google, McDonald’s and others have severed ties with ALEC after controversy erupted over the organization’s denial of climate change science and support for “stand your ground” gun laws following the deadly shooting of Trayvon Martin in Florida.
Texas was by far the most heavily-represented state: 22 of ALEC’s 54 corporate sponsors hailed from the Lone Star State, including oil heavyweight ExxonMobil and other energy companies such as Luminant, Oncor, Breitling Energy and CenterPoint Energy. Texas business associations underwriting the event included the Texas Automobile Dealers Association, the Texas Oil and Gas Association, and the Texas Business Roundtable.
The meeting’s chief sponsor, at the “President’s Level” of $100,000, was North Carolina-based tobacco giant Reynolds American, a major contributor to state and federal Republican groups. Reynolds has long been a major player in Republican and conservative politics: The company gave a total of $4.3 million to political nonprofits and political action committees in 2014. Reynolds wasn’t the only tobacco company at the table; the Cigar Association of America put in $50,000, and Altria, parent company to Philip Morris and the world’s largest tobacco firm, contributed $25,000.
In 2007, Exxon announced that starting the following year, it would stop its contributions to public policy groups that deny the science of climate change. However, since 2007, the company has given $1.9 million to Republicans in Congress who deny climate change and over $450,000 to ALEC, which has long promoted misinformation on the issue and drafted numerous pieces of model legislation seeking to block action on climate change and undermine environmental regulations.
Other Southern operations involved in the ALEC meeting included American Electric Power of Columbus, Ohio ($50,000); AT&T of Dallas ($50,000); State Policy Network of Arlington, Virginia ($50,000); UPS of Sandy Springs, Georgia ($25,000); for-profit education company K12 of Herndon, Virginia ($10,000); tax services company Ryan, also of Dallas ($10,000); Duke Energy of Charlotte ($10,000); and Piedmont Natural Gas of Cary, North Carolina ($5,000).
Interestingly, some foreign companies sponsored the gathering. Two Japanese pharmaceutical companies, Takeda ($25,000) and Astellas Pharma ($10,000) were sponsors, as well as the Massachusetts-based Sunovion Pharmaceuticals ($5,000), a subsidiary of Japanese company Dainippon Sumitomo Pharma. Diageo, based in London and the world’s largest spirits producer, gave $25,000. Association of Bermuda Insurers & Reinsurers (ABIR) chipped in $5,000.
The issue of overseas money in politics has been used as a major line of attack against Democratic presidential hopeful Hillary Clinton by conservatives and Republican candidates heading into the 2016 elections. 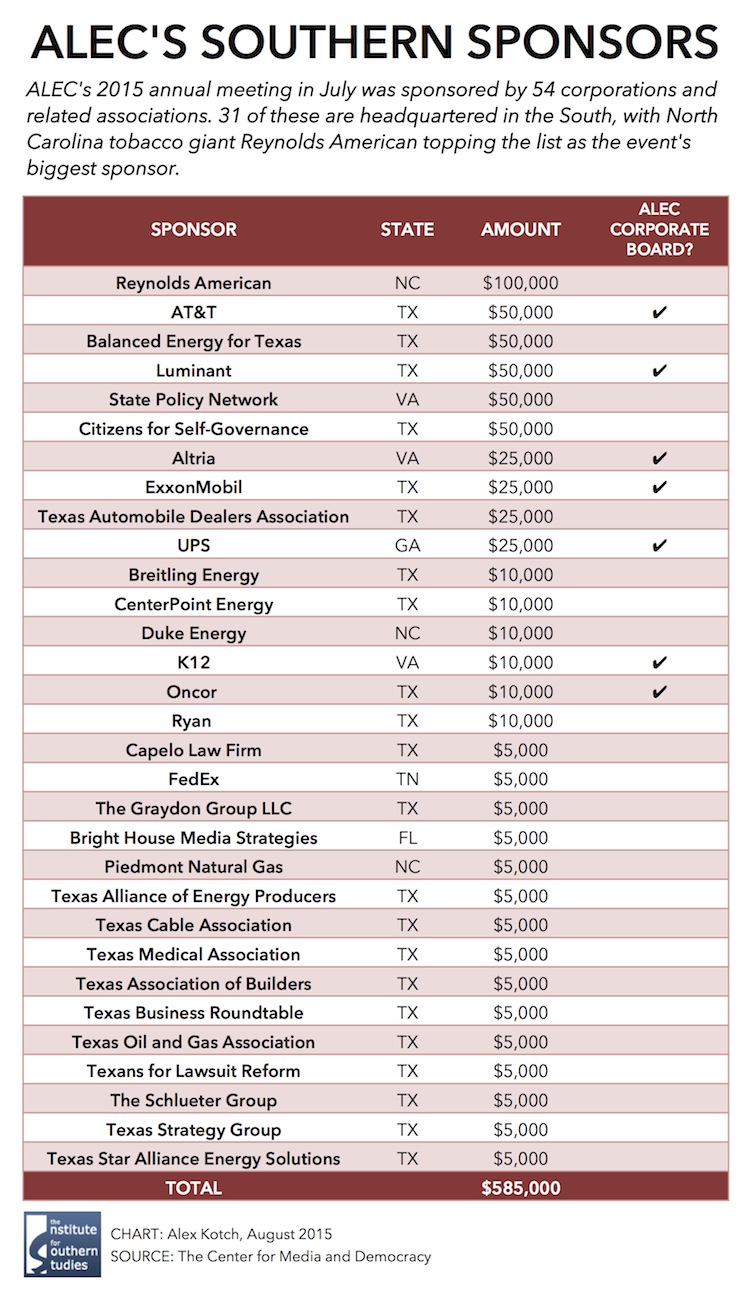