Skip to main content
Join the voice for a changing South.
Donate Today
By Allie YeeSeptember 17, 2015

Juan Parras, director of Texas Environmental Justice Advocacy Services (TEJAS), which works with communities of color impacted by pollution, spoke out against oil company Chevron in 2010. (Photo by Rainforest Action Network via Flickr.)

Environmental organizations in the U.S. are staffed nearly entirely by whites with little representation by people of color, contributing to a perception that communities of color are not interested in environmental issues. But a poll released this summer surveying 1,200 Latino voters across the country challenged this notion, finding that there is, in fact, broad concern for the environment among Latino voters.

The July poll, which was conducted by Latino Decisions for Earthjustice and GreenLatinos, found that the environment is as important to Latino voters as jobs and the economy and that clean air and water were of even greater concern than immigration reform, a major gateway issue for Latino voters.

"I think these trends point to the untold story of Hispanics," said Rudi Navarra, the Southeast regional coordinator for the U.S. Climate Action Network (USCAN), "that they see clean energy, investment in water and natural resources connected in some way to their pocketbook, to the economic recovery and to their quality of life." 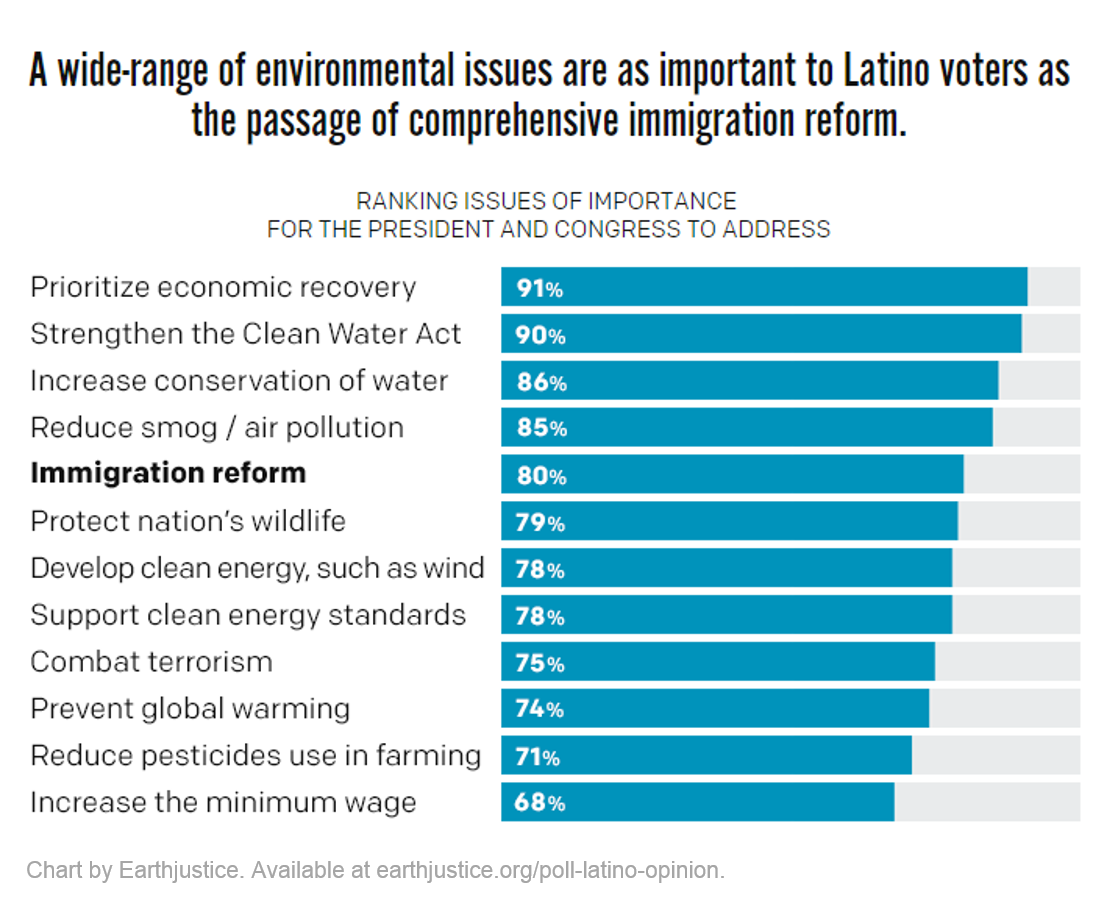 The South is home to a booming Latino population with states like South Carolina, Alabama, Tennessee and Kentucky seeing their Latino population more than double since 2000. In Georgia and North Carolina, the Latino share of the population is approaching one in 10. While these emerging Latino communities in the region face a myriad of pressing community needs around education, jobs, health care and immigration reform, they are also engaging on environmental issues.

Navarra from USCAN pointed to various ways that Latinos are advocating for the environment from opting into clean energy or energy efficiency programs to choosing to buy or not buy certain products. There is also a significant Latino farm labor community in the South that witnesses and experiences firsthand the environmental impacts of pesticides and other agricultural practices, which have fueled organizing efforts.

In Florida, Latino voters have expressed their environmental concerns at the ballot box. During the 2014 midterm elections, another Latino Decisions study conducted in partnership with the Hispanic Access Foundation found that over 75 percent of voters in majority-Latino districts supported the Florida Water and Land Conservation Initiative (Amendment 1). The initiative ultimately passed with 75 percent of the vote statewide, allocating billions of dollars over the next 20 years to protect clean drinking water and conserve wetlands and recreational lands in Florida.

From Miami, Navarro works with a network of more than 200 environmental and other groups in the Southeast coordinating around climate change action. While he says the bench is thin in terms of Hispanic groups in the network, he's encouraged by their involvement in organizing a major march in Miami coming up on Oct. 14 as part of the People's Climate Movement national day of action. The event is a follow up to last year's major People's Climate March in New York City.

"I don't think Hispanics for the most part see themselves as 'environmentalists,'" Navarra said, echoing a finding from the national poll. "But that doesn't mean they're not advocates for the issue."