The Texas city at the center of a controversy over Islamophobia is undergoing rapid demographic change, but local politics have not caught up with it yet. (Photo by Steve Rainwater via Flickr.)

Last week, Irving, Texas high school freshman Ahmed Mohamed brought a clock he had made to school to show his engineering teacher. School administrators raised concerns that it looked like a bomb, and the Sudanese-American teen was questioned without his parents, taken into custody and suspended from school for three days. The incident sparked a social media firestorm, with charges of Islamophobia and an outpouring of support for Mohamed from NASA engineers to President Obama.

Mohamed's case was not Irving's first brush with accusations of Islamophobia and racial bias. Over the years, the overwhelmingly white local elected leadership in Irving has reacted in a less-than-welcoming way to the Dallas suburb's rapidly diversifying population. In one of the most recent controversies, Irving City Council voted to back an anti-Sharia law state bill that critics said fueled anti-Islamic hysteria, with conservative Mayor Beth Van Duyne appearing on Fox News in support of it. Tensions have also flared with the city's fast-growing Latino community over the city's adoption of strict immigration enforcement measures.

These fights have come as Irving, the 13th largest city in Texas and a former white-flight destination for Dallasites, has become a city where the majority of residents are people of color. In 1980, Irving was 89 percent non-Hispanic white. By 2013, the non-Hispanic white population had fallen to just 30 percent. Latinos made up 41 percent of the population, Asians 15 percent and blacks 13 percent. 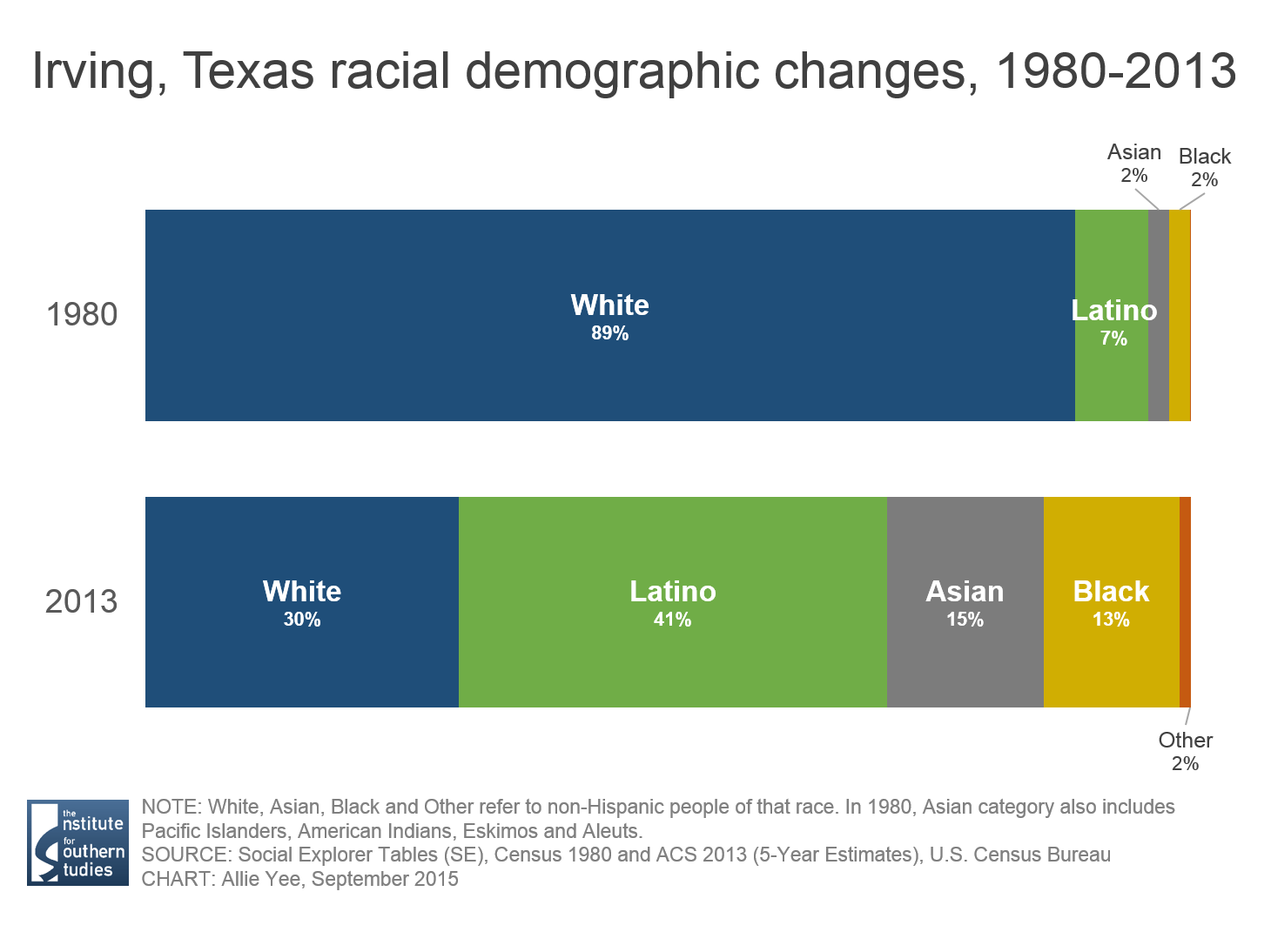 Residentially, the races are relatively integrated. According to an analysis from FiveThirtyEight, Irving was the 21st most integrated among the 100 largest U.S. cities and the fourth-most integrated of the Southern cities on that list.

Despite these dramatic demographic changes, communities of color are woefully underrepresented among Irving's local elected leadership. The city is led by a white mayor and a nearly entirely white city council and school board, although a few elected officials of color have been elected to the latter two bodies over the years and the school superintendent is Latino. Of eight city council members, today seven are white and one is black, while the seven-member school board has six white representatives and one who is Indian American.

Those [white] officials, and the sliver of population that elects them, are clinging to power. The city has tried to stem the influx of Latinos with tough-on-poor housing policies and zero-tolerance of undocumented immigrants. The white elite has maintained control with an election system that makes it nearly impossible for a Latino or African-American candidate – or any outsider – to win elected office, and the city has rebuffed numerous attempts to alter the system. 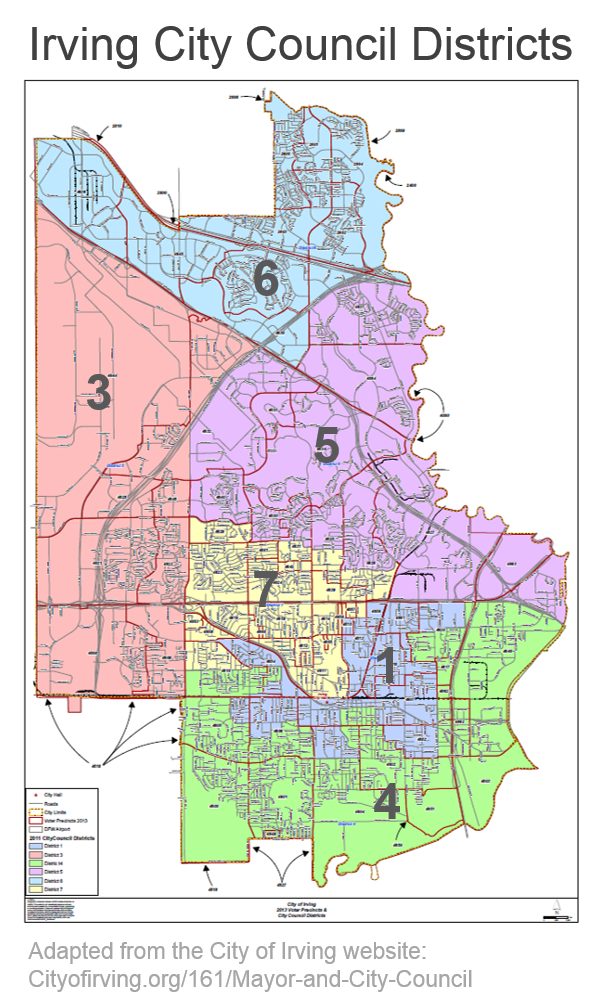 That same year, a federal judge ruled that Irving City Council's system of electing all members to at-large seats in citywide elections violated the federal Voting Rights Act by effectively barring minority candidates from winning elected office. The council was required to create several single-member districts where council members represented and were elected by certain parts of the city. Today, the Irving City Council is made up of six single-member districts, including one with a large Latino population, and three at-large seats including the mayor's.

The Irving Independent School District (ISD) has also recently gone through a similar redistricting process following a number of lawsuits. After initially creating five single-member districts and two at-large districts, Irving ISD was forced by the courts in 2014 to make all seven seats elected through single-member districts, which resulted in two majority or near-majority Latino districts.

Underrepresentation at the polls

While redistricting is one way to increase diversity among Irving's local elected officials, it cannot solve another major problem facing the city: the extremely low turnout rate in local elections.

Low turnout rates plague Texas in general and Irving in particular. In Dallas County where Irving is located, turnout in local elections has hovered around 5 to 7 percent in recent years — abysmal even by local election standards. By comparison, average voter turnout in municipal elections nationally has been about 21 percent. As a consequence, Mayor Van Duyne won re-election in 2014 with less than 5,000 votes across the entire city, which has a population of 232,000. Single-member district races for city council are decided by margins of a couple hundred votes. 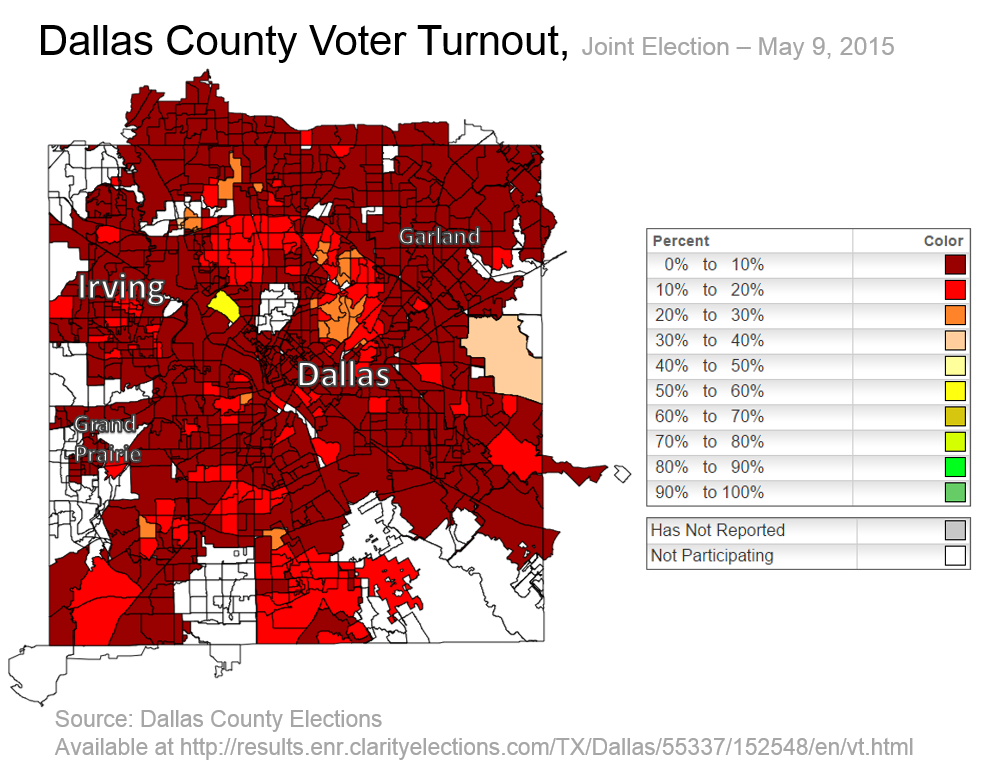 Low turnout disproportionately affects representation among communities of color, where many residents are not eligible to vote in the first place. In Irving, about a third of the city's population are immigrants, most from Asia or Latin America. Only a quarter of that foreign-born population are naturalized citizens, meaning a significant share of the Latino and Asian communities cannot vote.

Even among eligible voters, trends point to gaps in turnout among Latinos and Asians compared to whites and blacks. Dallas County does not track the race or ethnicity of its voters, but a statewide report found that only 39 percent of eligible Latino voters in Texas voted in the 2012 presidential elections. That compares to 61 percent of the state's eligible white voters.

Nationally, 47 percent of eligible Asian voters turned out to the polls in 2012 compared to 64 percent of whites and 66 percent of blacks. These gaps are often exacerbated in non-presidential election years when turnout is lower and the electorate skews older and whiter.

Despite the challenges, efforts are underway to change local politics in Irving. For example, following the fight over the anti-Sharia law bill, which passed city council in a close 5-4 vote, record numbers of first-time Muslim voters turned out in the local election held earlier this year. According to organizers, the effort was completely grassroots and cost almost nothing.

Demographic changes like those that have transformed Irving are happening in communities across the South, changing the complexion of communities and the electorate in unprecedented ways. As other Southern cities experience rapid growth in immigrant populations, Irving offers a lesson about the barriers that persist in preventing these emerging communities from exercising real local influence even as they become a significant share of the community.