America's voting machines are aging, and a new report raises concerns about how the outdated technology will affect next year's elections. (Photo by momboleum via Flickr.)

The nation's voting machines are aging out, and experts are raising concerns about what that could mean for next year's elections.

A new report by the Brennan Center for Justice titled "America's Voting Machines at Risk" details the voting technology crisis across the U.S. The problem is especially pressing in the South, where states are heavily reliant on machines purchased in 2006 or earlier — and where many local officials say they lack sufficient funds to buy new ones.

"No one expects a laptop to last for 10 years," said Lawrence Norden, deputy director of the Brennan Center's Democracy Program and the study's co-author. "How can we expect these machines, many of which were designed and engineered in the 1990s, to keep running without increased failures?"

After the Florida presidential election debacle in 2000, Congress appropriated $2 billion to transition to electronic voting systems. But the technology is aging and needs to be replaced.

The study says the biggest risks from aging machines are increased failures and crashes, which can lead to long lines and lost votes. Elections officials also expressed concerns over "flipped votes" on touch screen machines, where a voter tries to select the name of one candidate but the machine registers it as a selection for someone else. Last year in Virginia Beach and Newport News, Virginia, for example, both Republicans and Democrats reported that touch screen machines were registering votes incorrectly, with one voter being told his finger was "too fat."

Across the South, all election jurisdictions in three states — Georgia, Louisiana and South Carolina — purchased their voting machines in 2006 or earlier.  In seven Southern states — Arkansas, Florida, Mississippi, North Carolina, Tennessee, Virginia, West Virginia — the majority of election jurisdictions purchased machines in 2006 or earlier. No Southern states are among the handful where all the voting machines have been purchased since 2006. 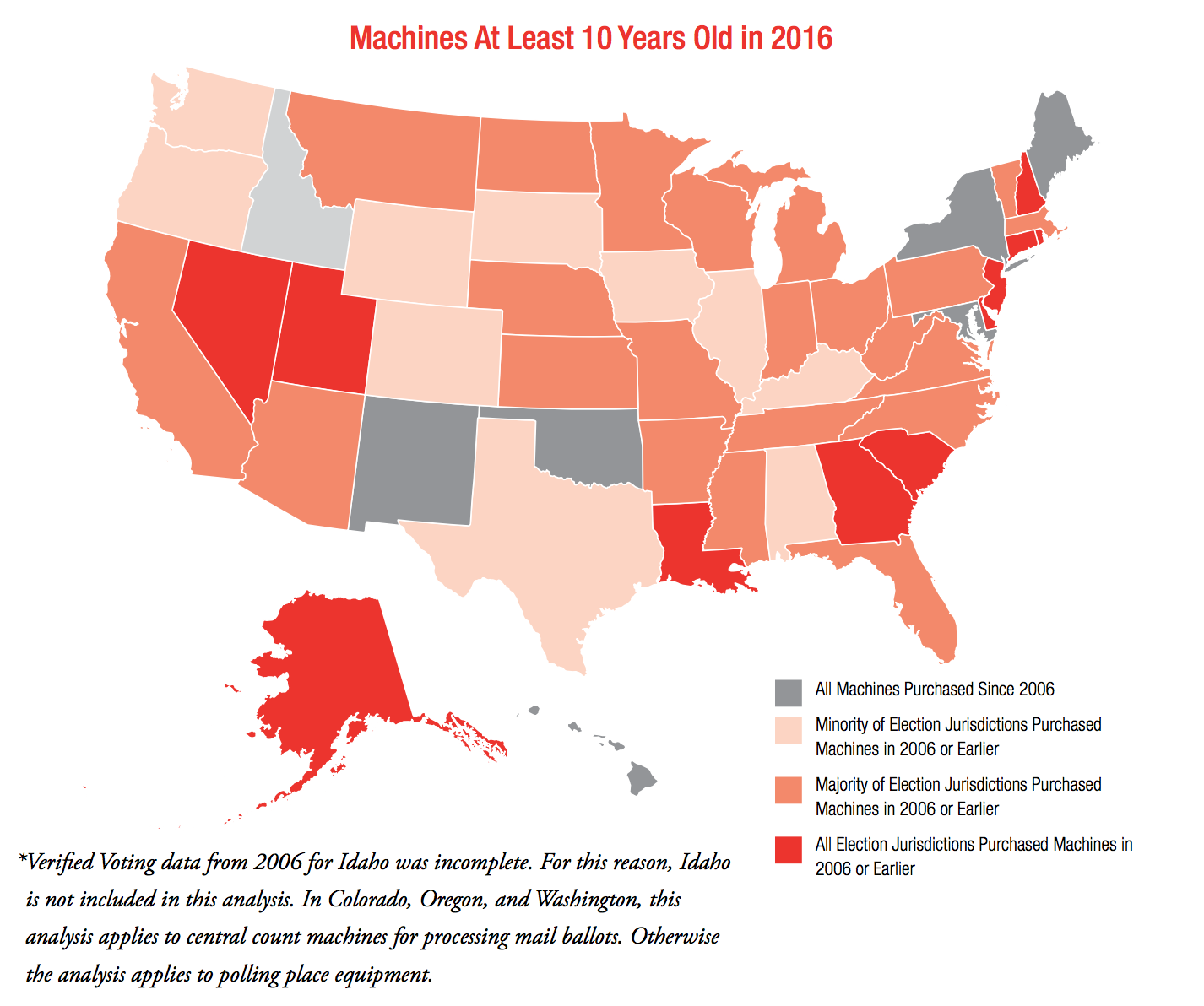 In 14 states across the country, voters will be using machines that are 15 or more years old. Four of those states are in the South: Florida, Louisiana, Texas and Virginia.

"I just will tell you that it's getting a little scary out there," Louisiana Secretary of State Tom Schedler told a legislative committee earlier this year. "Voting machine equipment is all 15-20 years, plus." Others testified about local elections officials having to scavenge parts from old machines to keep current machines operating.

The Brennan Center report found that jurisdictions in 31 states want to purchase new voting equipment in the next five years, but officials in 22 of those states said they didn't know where they would get the money. Almost half of those states are in the South: Alabama, Arkansas, Florida, Louisiana, Mississippi, North Carolina, Tennessee, Texas, Virginia and West Virginia.

The cost to taxpayers of replacing the outdated equipment nationwide could exceed $1 billion, according to the study. But the cost to democracy of not replacing it could be incalculable.

"Old equipment can have serious security flaws, and the longer we delay purchasing new machines, the higher the risk," said the Brennan Center's Norden. "To avoid a new technology crisis every decade, we must plan for and invest in voting technology for the 21st century."

Recounting in the battleground states