Big money is flowing into state supreme court elections at unprecedented levels, and it's hurting the racial diversity of the bench.

While people of color make up 38 percent of the U.S. population, they account for only 10 percent of state supreme court justices. Some of these justices of color were first appointed to their positions, and when they face re-election campaigns awash with money they win at lower rates than white incumbents, according to a new report from the Center for American Progress.

While white incumbents have been re-elected 90 percent of the time since 2000, that figure is 80 percent for black justices and just 67 percent for Latino justices. Alabama, for example, has a population that's 27 percent black but hasn't had an African-American Supreme Court justice since 2000 as the cost of judicial elections has skyrocketed. 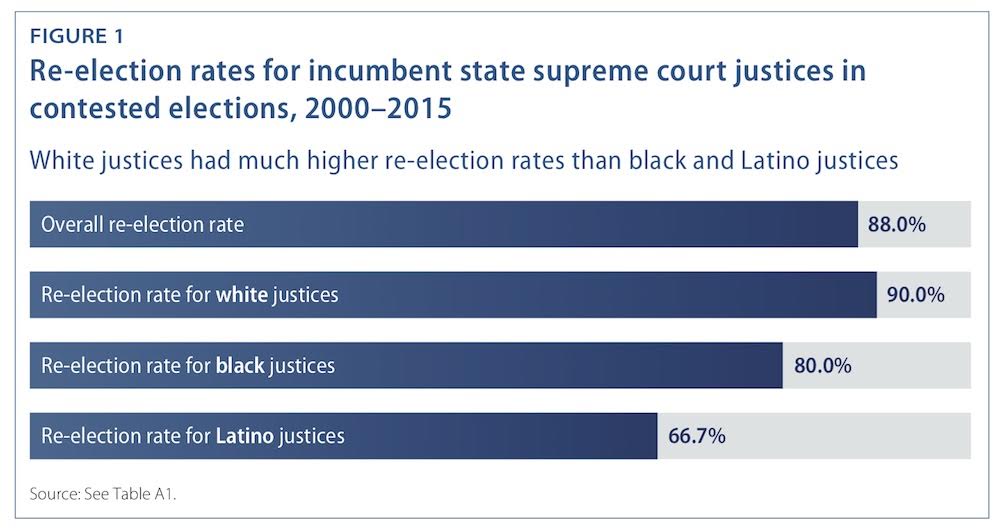 (Graph from "More Money, More Problems: Fleeting Victory for Diversity on the Bench" by the Center for American Progress.)

A disproportionately white judiciary has serious implications for the justice system. For example, studies have shown that white male judges are less likely to rule in favor of plaintiffs in civil rights cases compared to people of color and women. And when a justice system doesn't look like the people it's supposed to serve, it sows distrust.

"The lack of diversity on elected state supreme courts is alarming," report co-author Billy Corriher told Facing South. "These courts determine the scope of important rights related to voting, education, and health care. And state courts hear the vast majority of criminal cases in America. We've seen in Ferguson what happens when judges do not reflect their communities."

Candidates of color tend to have more trouble than their white counterparts raising the funds they need to run increasingly costly statewide campaigns, as they "often do not have the same connections to networks of wealthy campaign donors," said Corriher.

Another report released this week, this one by Justice at Stake, details just how costly these high court campaigns are getting. While the total sum spent in state supreme court races was down from other recent mid-term election cycles due to an unprecedented number of unopposed seats, spending records were broken in three states: North Carolina, where more than $6 million was spent on four seats; Tennessee, where spending on three retention elections totaled $2.5 million; and Montana, where spending in two races topped $1.5 million.

All three states saw a large influx of money from an independent national group, the Washington, D.C.-based Republican State Leadership Committee (RSLC). Nationally, the share of overall spending by independent groups such as the RSLC was 29 percent, an all-time record.

And money makes all the difference: Over 90 percent of contested state supreme court races in the 2014 elections were won by the candidate who raised the most money for his or her campaign, according to the Justice at Stake report.

This private campaign finance system is riddled with racial bias. A study released earlier this year by the public policy group Demos found that at least 90 percent of big donors to federal candidates are white, while a recent Facing South/Institute for Southern Studies report found that 95 percent of North Carolina's donor class in the 2013-2014 election cycle was white.

So how do we fix the racial disparities in our courts? The way we choose our judges is the key, says Corriher.

"Some judicial appointment systems have been more effective at ensuring diversity," he said. "And we know that public financing goes a long way towards opening the door to diverse candidates."

In North Carolina, for example, a black Supreme Court justice lost a seat in 1998 and another in 2000 after spending in those races skyrocketed. In 2002, the state enacted a popular judicial public financing system for Supreme Court and Court of Appeals races; all four black candidates for those offices from 2004 to 2010 used the program and won. But in 2013, the state legislature killed that program. There are now two black justices total on both courts.

CAP also says that citizens concerned about racial inequality on the bench should work to dismantle barriers to voting and to increase turnout in midterm elections. And it calls on law schools to ensure their student bodies are diverse and urges bar associations to ask governors to ensure diversity in their judicial appointments.