In the political battleground of North Carolina, the racial demographics of the state's voters are rapidly changing, with African-American, Asian and Latino communities giving rise to a more diverse electorate.

But the big donors that bankroll the state's elections don't reflect this growing diversity, according to a new report by the Institute for Southern Studies.

Drawing on campaign finance reports, the Institute identified the 574 biggest North Carolina donors in the state's 2014 U.S. Senate race, the five most expensive U.S. House races in the state, and the 2016 presidential contest so far. Researchers then examined the racial demographics of the donors, drawing on state voter files and other sources. The findings offer a snapshot of North Carolina's "donor class": 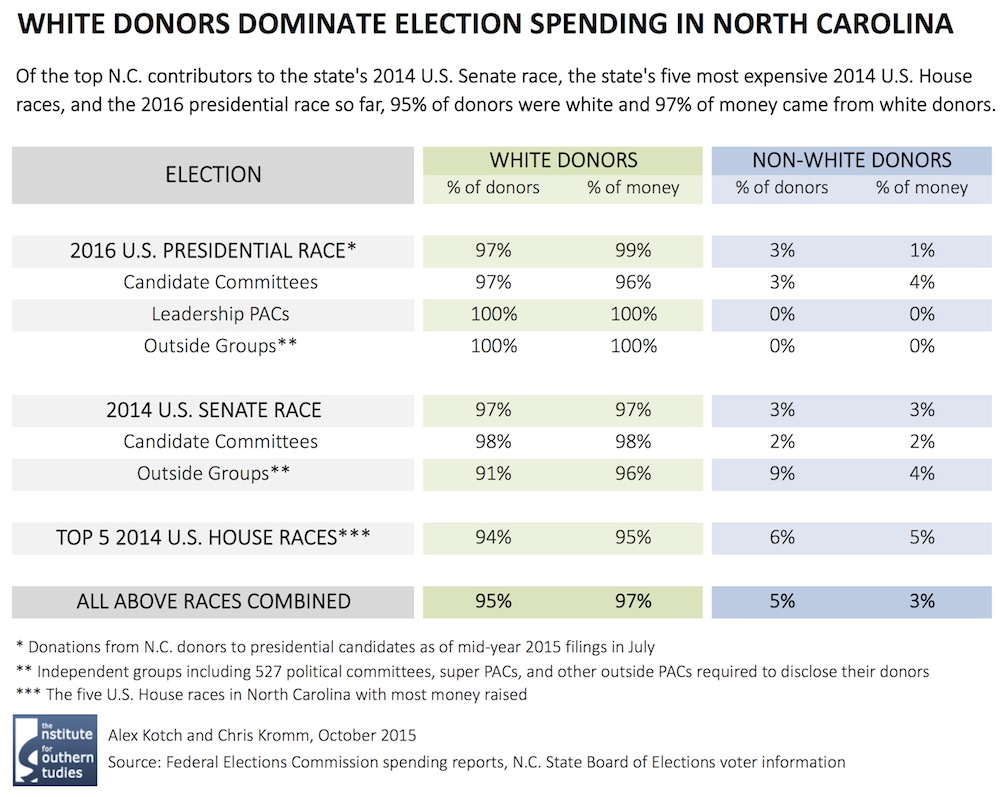 The map below, created by Institute Program Associate Allie Yee, locates all donating ZIP codes included in the study, with circles scaled to the size of the total donations from each ZIP code.

Among the report's other findings:

The findings of this report are consistent with other research that has highlighted the narrow demographic makeup of the donor class. Democracy North Carolina’s 2003 study, "The Color of Money in North Carolina," Demos' "Stacked Deck" report, and Every Voice's research all show that the largest political donors are overwhelmingly white.

This report and other research underscore the need for meaningful reforms that curb the influence of special-interest money in elections and that not only promote “good government” but also have the potential to promote equity and a more level playing field in the democratic process.

The report’s release coincides with an event hosted at the Hayti Center in Durham on Thursday, Oct. 15, "Money in Politics as a Civil Rights Issue."

* These numbers are U.S. Census Bureau's estimates based on the 2009-2013 American Community Survey, which provides complete non-Hispanic racial demographics.