The election of Jennifer Roberts in Charlotte, North Carolina and the re-election of Mike Rawlings in Dallas this year continued the trend of Democrats winning mayoral races in large cities in Republican-dominated states.

It's no secret that Republicans have dominated state politics in the South in recent years. In 2014, Republicans strengthened their position in Southern state legislatures, with only one chamber in the region — the Kentucky House — under Democratic control after the elections.

After the November 2015 victory of Republican Matt Bevin in the Kentucky governor's race, only Virginia and West Virginia have Democratic governors. (Louisiana will have a runoff between Democrat John Bel Edwards and Republican David Vitter on Nov. 21.)

But a Facing South/Institute for Southern Studies analysis finds that Democrats have managed to maintain control of one key area of Southern politics: the mayorships of the South's largest cities.

As in many areas around the country, urban centers are growing in the South while rural counties are losing population. The South's cities are also where some of the most pronounced demographic changes are underway in the region, with urban areas serving as magnets for fast-growing African-American, Asian and Latino communities.

The Facing South/Institute analysis looked at the mayors of the 30 largest cities in 13 Southern states, according to the latest Census numbers. Unsurprisingly, more than half the cities were in the South's two largest states: Texas (11) and Florida (six). 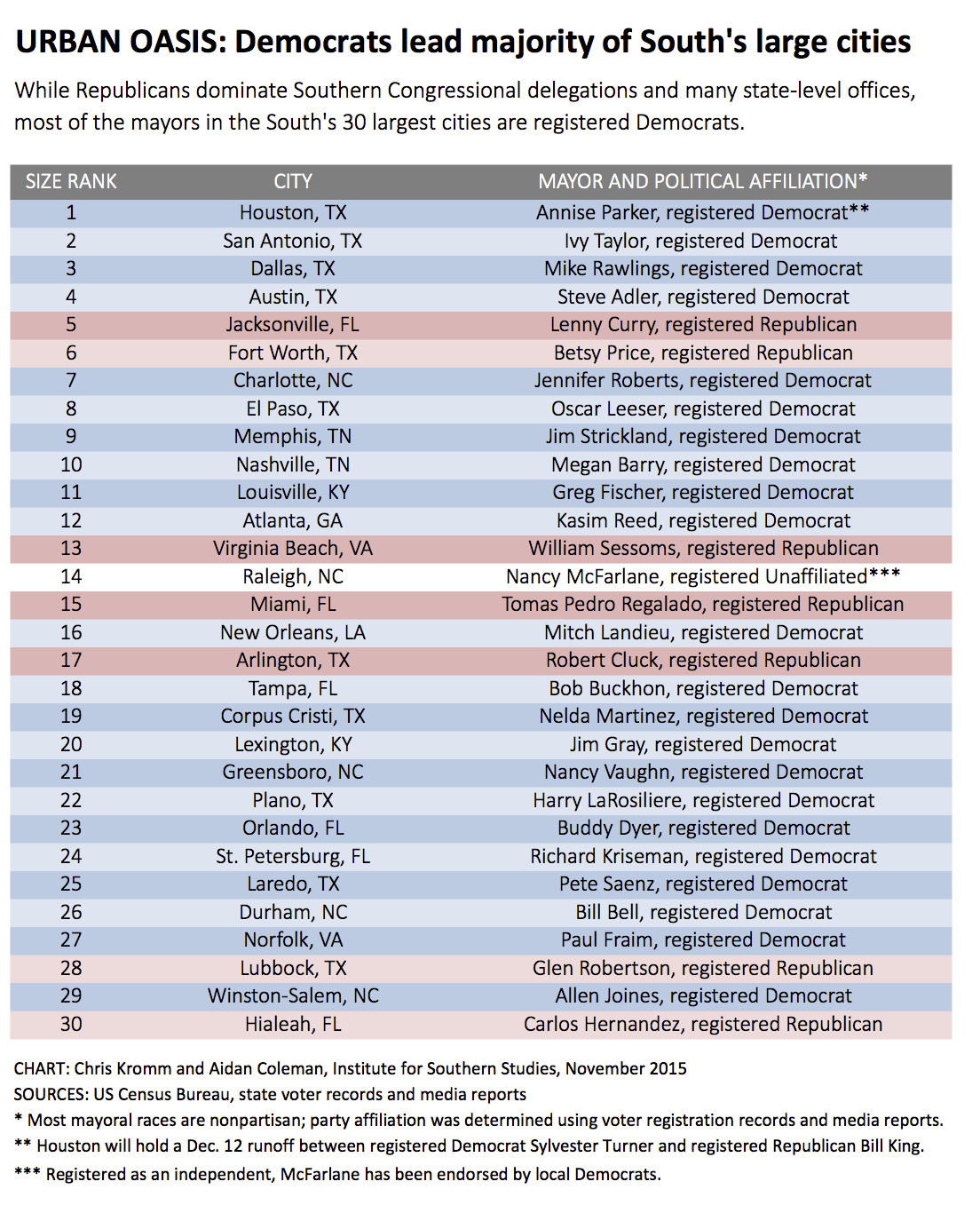 The findings show that, when it comes to leading the region's major cities, Democrats have largely succeeded in bucking the Republican trend found in Southern state and federal politics.

In the South's 30 largest cities, 22 mayors are registered Democrats and seven are Republicans. One — Nancy McFarlane in Raleigh, North Carolina — is registered as an independent but has been endorsed by local Democrats.

All but one of the big Southern cities with Republican mayors are in Florida and Texas; GOP Mayor Will Sessoms of Virginia Beach is the lone outlier. While Florida and Virginia are perennial battleground states, Texas remains a Republican stronghold, with no statewide officeholders who are Democrats.

The disconnect between city and state politics points to a growing political divide between the South's expanding urban centers and declining — but still large — rural areas.

Due to how political lines are drawn, the rise of Southern cities with expanding progressive-leaning majorities will have limited impact on the makeup of GOP-controlled state legislatures and Congressional seats. But in states like North Carolina, Democrats will likely aim to maximize voter turnout in cities like Charlotte and Raleigh — and that could impact statewide races like the tight 2016 governor's contest.

Cities can also be important laboratories for progressive policy experimentation. Most states in the South have failed to act on the declining value of the minimum wage, but in 2015, Birmingham, Alabama and Greensboro, North Carolina voted for local wage increases. And in the face of backlash against immigrants in the 2000s, Nashville, Tennessee pioneered a "welcoming" program that has become a national model for supporting newcomers at the local and state level.

But the ability of Democratic-led cities to maneuver in Republican states has its limits. In 2015, state GOP lawmakers across the South introduced local pre-emption bills to hem in localities' ability to implement policies on issues from fracking to paid sick leave to anti-discrimination ordinances for LGBT residents.

Aidan Coleman assisted with research for this story.

INSTITUTE INDEX: Pre-empting local democracy in North Carolina and beyond