ThinkProgress' Igor Volsky took to Twitter last week after the San Bernardino massacre, documenting how much money the National Rifle Association had spent in support of various U.S. representatives and senators who voted against gun-safety legislation.

The day after last week's massacre at a center for the developmentally disabled in San Bernardino, California that left 14 people dead, the U.S. Senate rejected two gun-safety measures, one expanding background checks for gun purchases and another preventing known or suspected terrorists from buying guns.

Of the South's 26 U.S. senators, 22 voted against both measures, all of them Republicans. Three Southern senators voted for the measures, all Democrats, while another Democrat did not vote.

Inspired by ThinkProgress editor Igor Volsky's Twitter campaign exposing the National Rifle Association's financial support of U.S. senators and representatives who voted against the gun-safety measures, Facing South examined the NRA's campaign contributions to and outside political expenditures benefiting the region's senators — a total of over $12.7 million since 2010.

According to data compiled by the Center for Responsive Politics, the NRA poured more than $12.5 million into outside political expenditures benefiting these senators' election bids from 2010 to 2014 — for both ads that praised the candidates and attacked their opponents. From 2010 to present, their campaigns have received a total of $161,000 in direct contributions from the pro-gun group.

Sen. Rand Paul, a Kentucky Republican and presidential hopeful, was the only senator voting against the gun-safety measures who did not benefit from NRA support. While Republican Sens. Lamar Alexander of Tennessee and Lindsey Graham of South Carolina did not receive direct campaign contributions from the NRA during their most recent campaigns, they did benefit from campaign contributions from the group in 2008 as well as outside spending.

Democratic Sen. Joe Manchin of West Virginia, whose campaign received $11,450 from the NRA between 2010 and 2012 and who is typically an ally of the group, co-sponsored the background check measure. He began pushing for gun control earlier this year after the massacre of nine people, including a state senator, at the Emanuel African Methodist Episcopal Church in Charleston, South Carolina.

For details on the NRA's election spending, see the table at the end of this article.

In 2013-2014, the NRA spent over $27 million to influence federal elections, making it the 10th-highest outside spender in that election cycle. The group invests in state politics as well, as Republican U.S. Sen. Thom Tillis of North Carolina noted in his May thank you letter to the pro-gun powerhouse in which he credited it with playing "a pivotal role in electing a majority in the North Carolina Legislature that was committed to expanding our Second Amendment rights."

Tillis benefited from over $4.4 million in outside expenditures during his close U.S. Senate race against Democratic incumbent Sen. Kay Hagan last year, the most by far of any Southern Senate candidate since 2010. He also received campaign donations of $9,900 from the NRA last year, tied for the top slot with 13 other U.S. senators and representatives.

Besides spending prodigiously on elections, the NRA lobbies heavily against gun regulation. It spent about $3.4 million on federal lobbying in both 2013 and 2014. This year, at $2.7 million, it's just ahead of the National Shooting Sports Foundation, and far ahead of other gun rights groups and gun control groups. 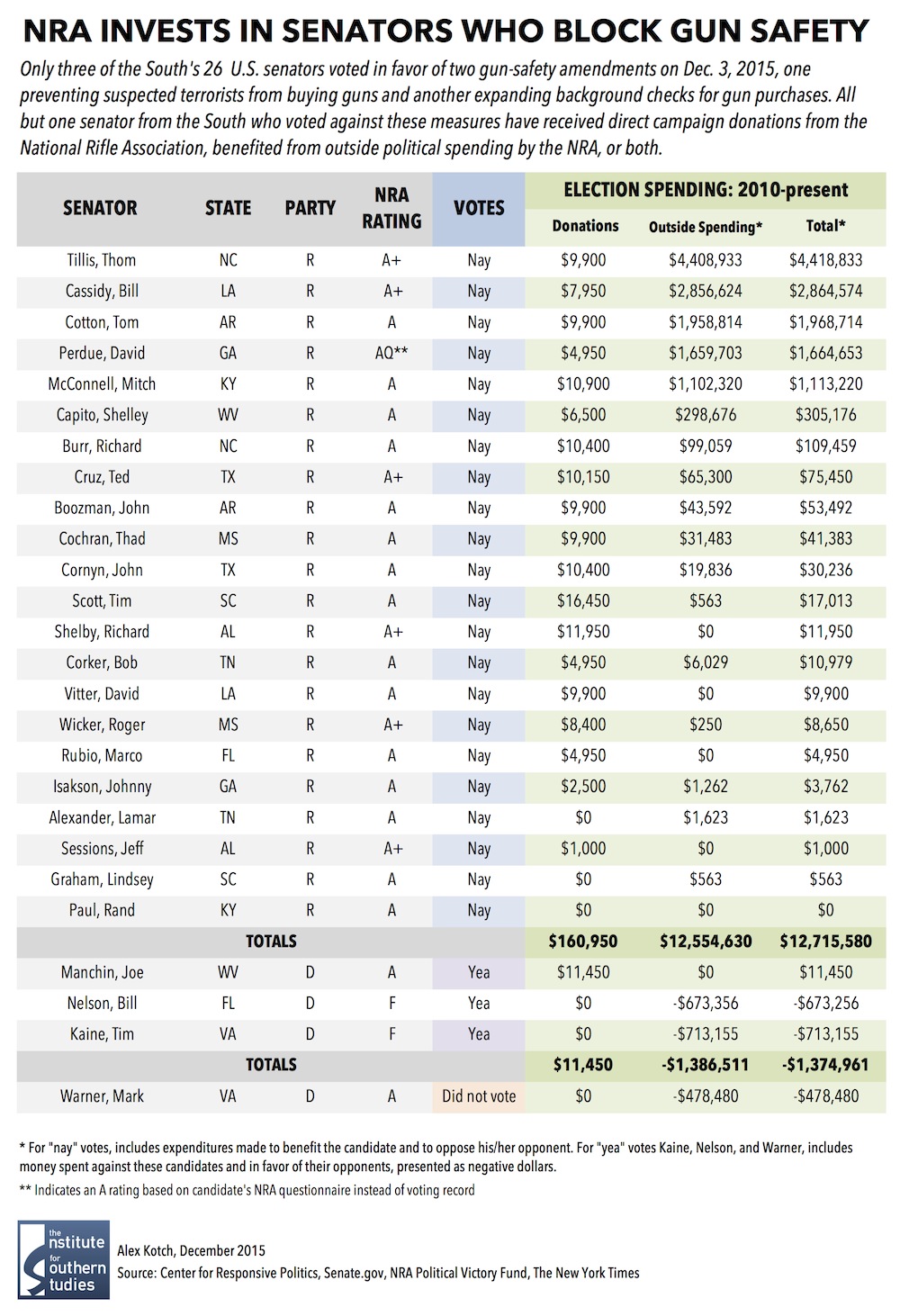 The politicians who stood with the NRA after the Uvalde massacre

INSTITUTE INDEX: The South under the gun