The Electoral College map for the 2012, 2016 and 2020 U.S. presidential elections shows gains made by Southern states following the 2010 Census and reapportionment. The South is expected to gain another five congressional seats and Electoral College votes after the next Census. (Map via Wikipedia.)

This weekend, Republicans in South Carolina — where front-runner Donald Trump enjoys a double-digit lead in the polls — will host their 2016 presidential primary, the first in a string of primaries across the South.

The spring primary calendar, which includes "Super Tuesday" contests on March 1 in six Southern states, allows voters in Southern states a unique opportunity to shape the course of the 2016 election — a reflection of the region's growing clout in influencing national politics.

Southern states weren't always so influential in presidential primaries. After 2012, four Southern states — Arkansas, Kentucky, North Carolina and Texas — moved up their primary dates to have a greater say in the election. This year, 11 of the South’s 15 primaries and caucuses will have taken place by March 8, making the front-loaded Southern states a dominant force in the primary elections.

The South's unique influence in the presidential primaries has different implications for each party.

For Democrats, early Southern primaries amplify the voice of African-American voters, compelling the party's presidential hopefuls to more directly engage issues of racial justice and civil rights on the campaign trail. In South Carolina, African Americans make up 28 percent of the state's registered voters, and about half of the state's Democratic electorate.

On the Republican side, primary voters in the South trend more conservative, with greater influence from evangelicals. A YouGov poll in January found 58 percent of Republican voters in South Carolina identified as "born again" or evangelical Christian, a finding in line with earlier polls (although, as this year's primary has shown, evangelicals themselves are a diverse and divided group).

Adding to the influence Southern states enjoy in 2016 is the sheer number of delegates coming from the South that will choose each party's presidential candidate.

Democrats and Republicans each have unique and complicated systems to allot delegates for their nominating conventions, and state-level primaries and caucuses play a different role in each party.

According to a Facing South/Institute for Southern Studies analysis of projected delegate counts, 32 percent of the delegates sent by states to choose their party's presidential contender will come from Southern states. For Democrats, the Southern share will be about 31 percent; for Republicans, it will be one-third. 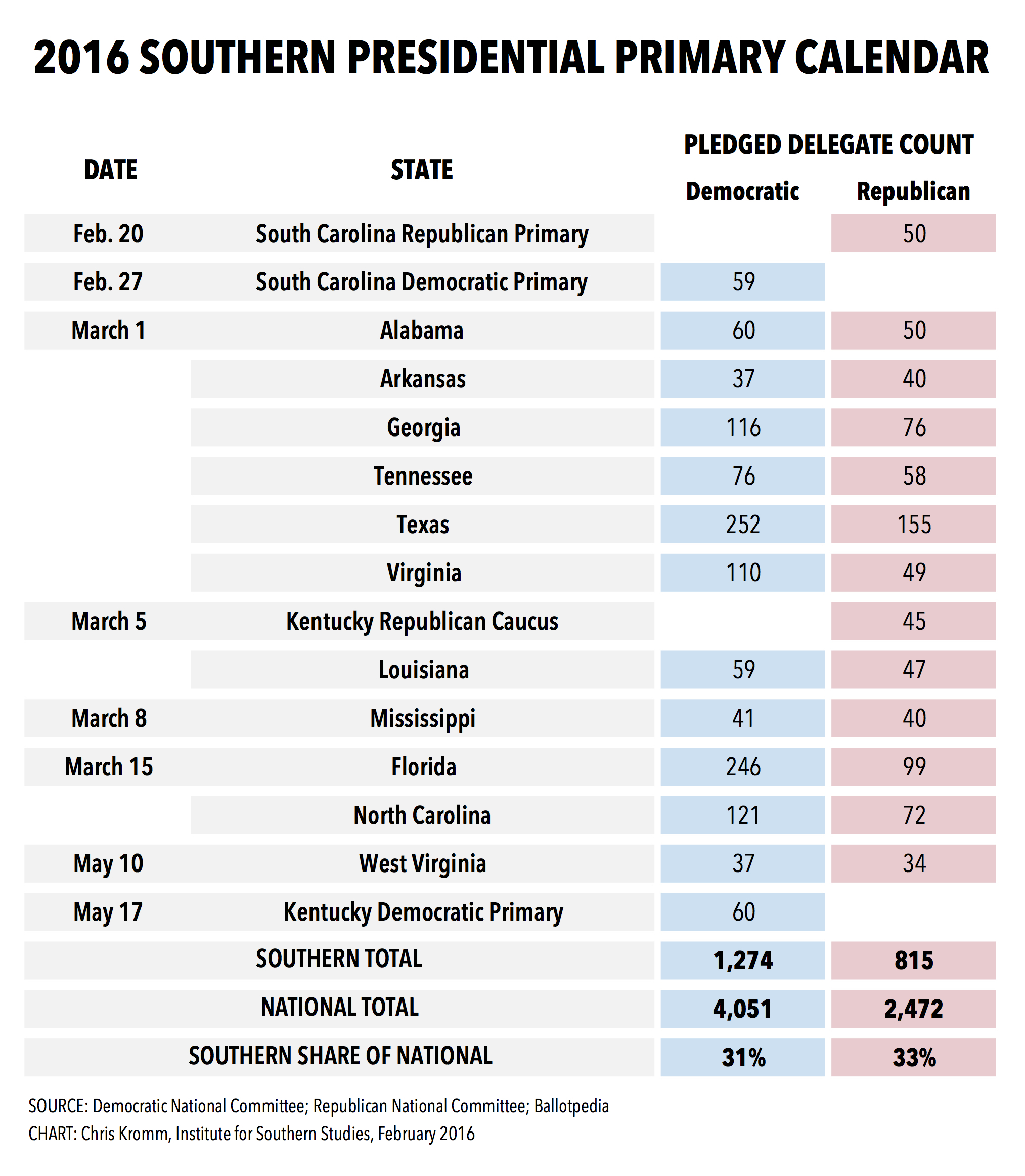 The influence the South will have in the 2016 primaries is in line with the critical role the region will play in November's general election. Put together, the 13 Southern states will account for 32 percent of the Electoral College votes needed to be elected president.

The South's dominance in national politics is only expected to grow in the coming years. When congressional districts are reapportioned after the 2020 Census, Southern states are projected to gain another five seats and Electoral College votes due to growth in Florida, North Carolina, Texas and Virginia. It's predicted that West Virginia, on the other hand, will lose a seat. 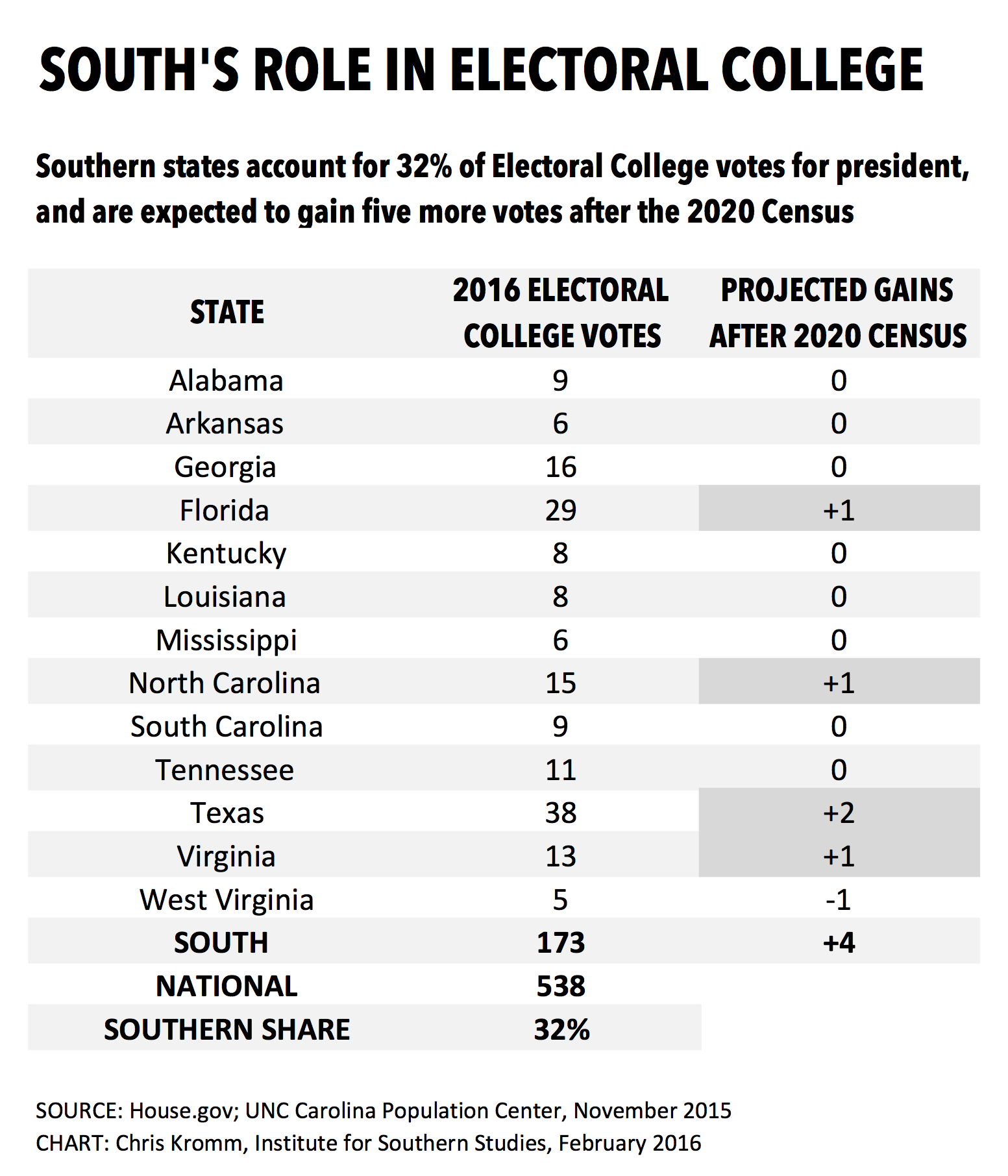 Beginning this weekend, the South will have an opportunity to shape the direction of national politics, a current of influence that will be felt for years to come.

Where do the presidential candidates stand on Atlantic oil and gas drilling?