In one of the biggest union campaigns in the South, employees at American Airlines voted to form a union with the Communications Workers of America in late 2014; the union now represents more than 14,000 passenger service agents, the vast majority in Southern states. (Photo: CWA.)

Over the last year, the share of U.S. workers belonging to unions held steady at 11.1 percent, according to data released last week by the Bureau of Labor Statistics. But the new BLS figures also show unions made surprising gains in a region where labor faces some of its biggest legal and political obstacles to organizing: the U.S. South.

North Carolina's rising unionization rate, which brings the state's total number of union members up to 123,000, or 3 percent of the workforce, lifted it out of its position last year as the country's least-unionized state. The bottom position now belongs to South Carolina, where the union membership rate stands at 2.1 percent. 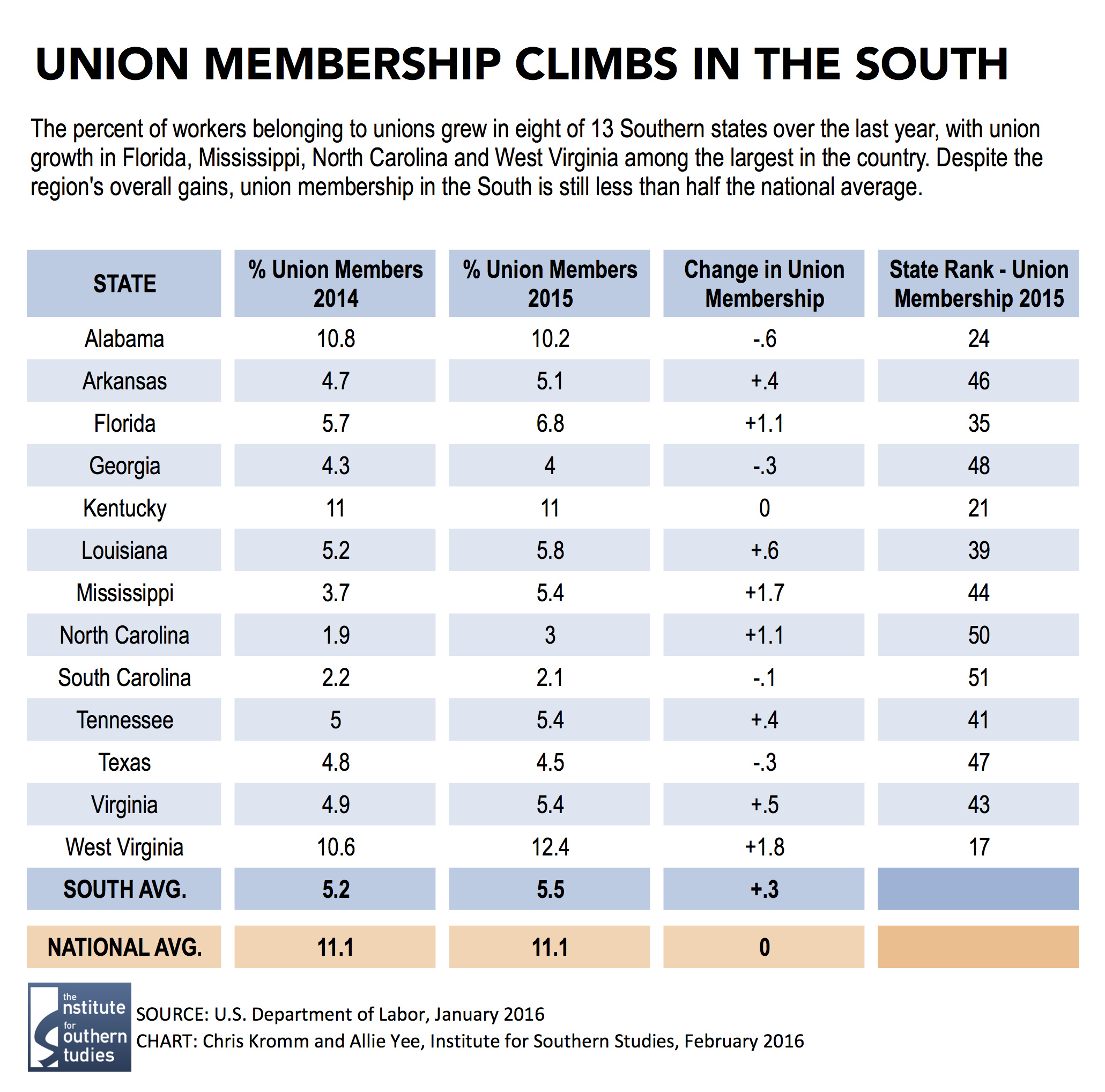 In a statement, MaryBe McMillan, secretary-treasurer of the N.C. AFL-CIO, argued that labor's gains prove that unions can make headway in the South, despite an array of barriers including "right-to-work" laws and bans on bargaining by public sector employees:

The increase in union membership in a majority of southern states, including North Carolina, confirms what polls have shown time and again: most workers support unions. Unfortunately, with our weak labor laws and lax penalties for companies who violate workers' rights, too few working people get the chance to join a union, and as a result, we've seen wages stagnate and inequality increase.

The BLS report brought into sharp relief the challenges that so-called "right-to-work" laws pose for unions. Currently, all Southern states except Kentucky and West Virginia have "right-to-work" laws, which allow employees to receive the benefits of a union contract without having to join a union individually, creating what labor calls the "freeloader" problem.

While 2.4 million Southern workers belong to unions, labor affiliates represent more than 2.9 million employees, meaning that unions are forced to spend precious resources negotiating and enforcing contracts for more than half a million workers in the South who aren't members.

The battle over "right-to-work," which in recent years has seen business groups successfully push for legislation in the Midwestern union states of Indiana, Michigan and Wisconsin, has steadily escalated in Kentucky and West Virginia.

After a two-year campaign led by Americans for Prosperity, the conservative advocacy group largely backed by conservative mega-donors Charles and David Koch, this week the West Virginia House voted 54-46 to approve "right-to-work" legislation. The bill is expected to be vetoed by Democratic Gov. Earl Ray Tomblin, but legislators need only a simple majority vote to override it.

Last year, 12 counties in Kentucky passed local "right-to-work" ordinances after a push for a statewide bill failed. However, this week a federal judge upheld a challenge brought by labor groups to a local measure in Hardin County, saying it's illegal to pass such rules on the local level. (Americans for Prosperity provided a $50,000 grant to help counties fight off the legal challenge.) With the local strategy tied up in legal appeals, business groups are likely to redouble their efforts to pass "right-to-work" legislation for the entire state, where Republican Gov. Matt Bevin has pledged to support such a measure.

The latest BLS numbers echoed trends found in earlier reports. The data shows a continuing "union wage" advantage, with median weekly earnings for union members ($980) more than $200 more than those for non-members ($776).

Union membership also varies by race. As the BLS report says, "Black workers continued to have a higher union membership rate in 2015 (13.6 percent)," an especially significant fact in the South, where half of all African Americans in the U.S. live. By comparison, 10.8 of white workers are union members, 9.8 percent of Asian workers and 9.4 of Latinos.

The incremental gains showed by unions in Southern states come at a time when labor is stepping up its efforts to organize in the South. The effort has included high-profile campaigns by the United Auto Workers in Mississippi and Tennessee and the Raise Up/Fight for $15 campaign, as well as non-traditional initiatives like the Working America community outreach program and a "Union Cities" project to build progressive power in Atlanta, Dallas, Miami and other urban areas.

Union leaders feel the urgency to continue labor's momentum in the South, however modest, but they also recognize that defending recent gains — much less growing in the often union-hostile climate in Southern states — will require a long-term commitment to Southern organizing.

As Tefere Gebre, the AFL-CIO executive vice-president who has been at the forefront of labor's efforts to expand in the region, recently told Facing South, "If anybody's not committing until 2022, coming in from outside of the South, they're just looking for a photo op."

VOICES: 'Unions are our best chance for changing our economy and politics'

Tefere Gebre: How labor can win the South