Amid the demographic shifts transforming North Carolina and its electorate, one has been widely overlooked — the rise of Asian Americans.

The Asian-American population in North Carolina, though relatively small, has become the fastest-growing racial and ethnic demographic in the state, according to new research released by several Asian-American and civic engagement-focused groups.

The "Asian Americans in North Carolina" report notes that between 2000 and 2010, the Asian-American population in the state grew 85 percent, the fastest rate in the South and the third-fastest in the country. Since 2010, Asian Americans have been the fastest-growing racial/ethnic group within the state. 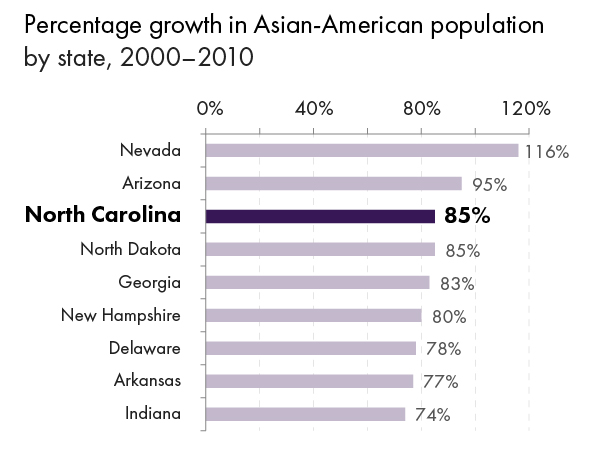 The report was developed and released jointly by Asian Americans Advancing Justice, the Institute for Southern Studies, the N.C. Justice Center and the Southeast Asian Coalition, and spotlights a community that is becoming an important part of North Carolina's growing ethnic and racial diversity.

Among the key characteristics of the Asian-American population in North Carolina:

As North Carolina prepares for its March 15 presidential primary, voting among Asian Americans is a major focus of advocates for the community.

"As our communities grow, we must ensure everyone has a voice in our political process," said Cat Bao Le, executive director of the Charlotte, N.C.-based Southeast Asian Coalition (SEAC).

This primary season, SEAC is working with N.C.'s Asian Americans Together to run nonpartisan get-out-the-vote phone banking events in Charlotte and Raleigh to encourage Asian-American voters to cast their ballots in next Tuesday's primary. Those interested in participating in the Saturday, March 12 phone bank can sign up by filling out this form.

The groups plan to release a more in-depth report on Asian Americans in the state later this year in advance of the November general elections.