Thousands of activists including many Southerners are in Washington this week for Democracy Spring. They're marching, sitting in and risking arrest to demand that Congress rid politics of big money and expand voting rights. (Photo by Alex Kotch.)

When Philip Hesslup heard that Republican senators blocked legislation providing medical care for 9/11 first responders last year, that was the last straw. Hesslup, a 29-year-old web designer from Jacksonville, Florida, had been following money in politics for some time, and he'd signed petitions for various causes he cared about.

"But that broke my heart," said Hesslup. "Not even [9/11 first responders] get what they need out of the government. That day I got really upset and I found Democracy Spring and I just had to join, because this needs to get solved. [Money in politics] is the one issue that dictates all others. Until we get the corruption out we're never going to make progress on anything."

So Hesslup signed up for a protest movement called Democracy Spring and caught an overnight train from Jacksonville to Philadelphia on April 1. "I got off at 9:30 a.m., walked to Liberty Bell Park and then hit the march — 140 miles." It was his first demonstration ever.

Democracy Spring is protesting big money in politics and voter suppression, with over 100 participating organizations including 99rise, Energy Action Coalition and Avaaz. It kicked off with 140 participants meeting in Philadelphia and embarking on a 10-day march to Washington, D.C., where daily rallies, marches and sit-ins at the Capitol building began this week.

On Monday, Capitol police arrested over 400 activists for "unlawful demonstration activity," possibly the most ever arrested for civil disobedience there. Organizers said as many as 700 protesters had been arrested through Wednesday.

More than 3,500 people made online commitments to risk arrest, and over 1,000 subsequently confirmed their participation in the nonviolent civil disobedience actions.

The movement is also calling on the Senate to hold an up-or-down vote on President Obama's nominee to fill the Supreme Court vacancy.

Meet some of the Southern activists who made the journey north to fight for democracy. All photos were taken by Alex Kotch.

On the march from Philadelphia to Washington, Hesslup met Taralei Griffin, 25, from Nashville, Tennessee. Griffin, a freelance writer, is a fan of The Young Turks, a progressive online news show, and got involved with Wolf PAC, a political action committee founded by host Cenk Uyger that has worked to build state-level support for overturning Citizens United. Through these outlets she found out about Democracy Spring.

"I get passionate about so many different issues, and this is something that I feel like needs to change before anything else can actually change," Griffin said. "Until we get money out of politics, the normal people aren't going to have their correct voting rights, they aren't going to have their voices heard because the corporations can say what they want and spend a lot more money to make sure the politicians do what they want."

Hesslup, who was arrested Wednesday for crossing a police line, and Griffin, who said she plans to risk arrest Thursday, say one of the best parts of the march was meeting like-minded people from other places.

"We all really bonded here and I think we all know in our hearts we're going to be lifelong activists like the seniors that have been doing this forever," said Hesslup. 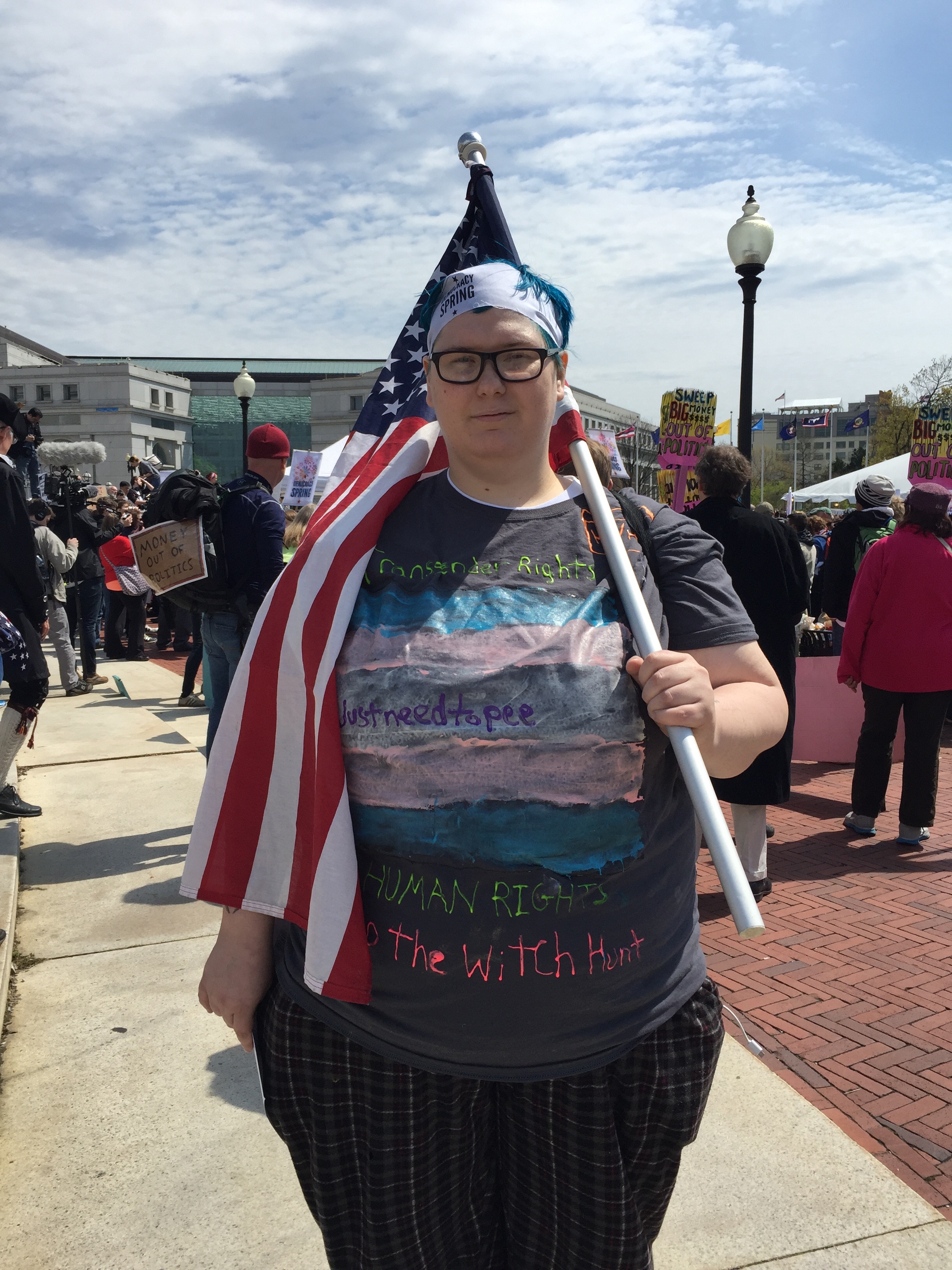 Christopher Reid, a transgender man from West Virginia, sported a shirt on Monday that read, "Transgender Rights" and "Just need to pee," referring to anti-trans bathroom laws in North Carolina and other states.

"I'm excited to get my voice heard," Reid said. "I'm part of a group that specifically doesn't get to have our voices heard a lot and we're often demonized, and I want to get more progressive candidates in here because that's the most important part."

As Facing South has reported, many of the businesses publicly denouncing North Carolina's HB2 in fact helped elect many of the bill's sponsors and signers through donations to outside political groups that spent on elections. 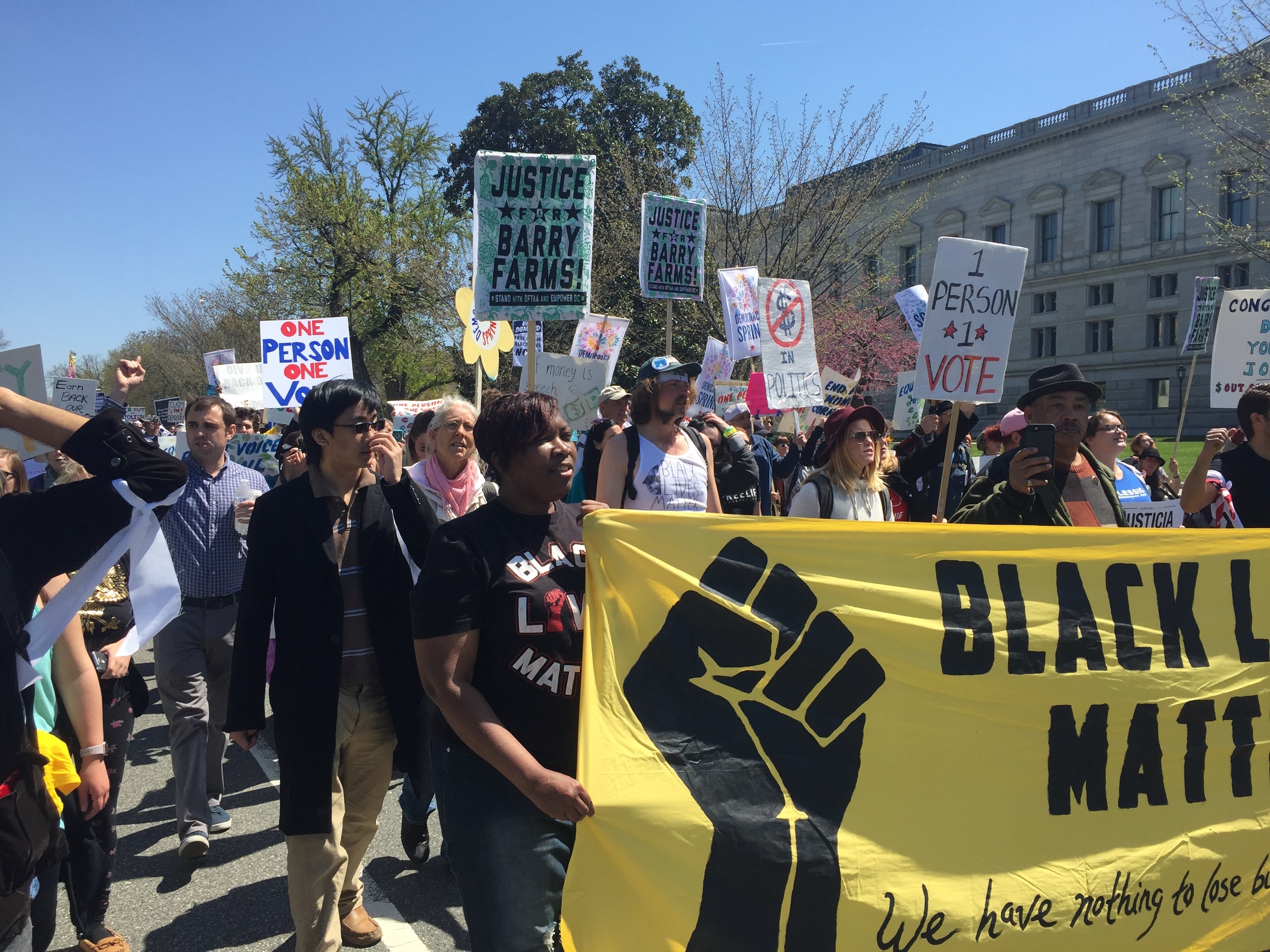 Cara Black, 46, drove the 12 hours from her home in Birmingham, Alabama, to Washington by herself. "I drove all night and arrived this morning," she said Wednesday.

"I spent so much of my younger years having fun, doing what I wanted to do, and my son challenged me to get involved. I knew I had to be here. There's just so much going on right now."

She wanted to make it for Wednesday's events, which focused on racial justice. She didn't risk arrest Wednesday because she was exhausted from the all-night trip, but she was considering arrest another day.

Race is an important issue within campaign finance, as the biggest political donors are usually white and don't reflect the country's growing racial diversity, as the Institute for Southern Studies found in North Carolina, where 95 percent of the state's largest donors to key federal races in the 2014-2016 elections were white.

David Drumm, an attorney, and his wife, Ann Drumm, an independent environmental advocate, came to Democracy Spring from their home in Dallas.

"I am very concerned about the democratic self-government system and its ability to sustain itself with the representatives not representing their constituents but their paymasters, their campaign donors," said David Drumm, adding that, in Texas, "the super PACs fund everything and I don't feel like my congressman really cares what I think."

He decided not to risk arrest this week, but his wife was arrested Monday during the sit-in. "She's going to be our family representative," he said.

Drumm hopes that more places enact public voucher systems like Seattle's for small campaign contributions. There seems to be growing interest, with as many as eight states considering similar systems this year.

"I think that's a more reasonable short-term goal than overturning Citizens United," he said. "There are some things we can do to put some small money in to ameliorate what the big money does."

Anita Kinney, 33, of Beach Mountain, North Carolina, is a regional field organizer with Democracy Matters, a nonpartisan, pro-democracy national student organization that trains young organizers, focusing primarily on public financing of elections. The group has chapters at many schools across the South, including four in North Carolina and others in Alabama and Georgia.

It's also on the steering committee of Democracy Spring, and Kinney helped mobilize more than two dozen students to participate in this week's protests, among them students from North Carolina's Guilford College in Greensboro and Appalachian State University in Boone.

An active organizer of Democracy Spring logistics, Kinney marched from Philadelphia to Washington and plans to risk arrest on Friday along with Democracy Matters Executive Director Joan Mandle "in solidarity with our students," as Kinney said. Friday is Democracy Spring's "Youth and Student Day."

When the Washington actions are over, Kinney hopes "people will then take the dream home. This movement isn't alone. People are ticked off and ready for change all over the place. States need to start implementing public financing systems and voter empowerment."

Democracy Matters will continue motivating students to engage with public officials, and even become those officials. "We want people to be able to run for office and represent their communities," she said.

Tom Futch carpooled from Jacksonville, Florida, to Washington, took a bus to Philadelphia, and then marched the full 140 miles to Washington.

"The reason I'm here is to overturn Citizens United and to give every person a vote," Futch said.

"Most exciting was walking from Philadelphia," he added. "Ten years ago I had a stroke. I didn't know if I'd even get up."

Chan Tlalok, a 65-year-old Apache and Vietnam veteran from Texas, got a degree in accounting from University of Texas but wasn't happy. His grandfather told him to "come back to our native ways."

"Our native ways are total freedom for everybody," Tlalok said. "Everyone has the right to speak, period. Total democracy. Pure democracy."

Tlalok joined the march from Philadelphia with the hope of giving everyone this right to speak and to represent the Apache.

"I'm here for my people," he said. "My people have been trampled on. And we've had enough. It's time for us to rise up … Now it's time to speak up for Mother Earth … All this corruption. All this climate change. All this pollution. Enough is enough."

Secret-money groups, some with Southern ties, may have broken election laws