With Donald Trump now the presumptive Republican nominee for president in the race against Democratic front-runner Hillary Clinton, attention is now turning to the impact the White House contest will have on down-ticket races, including state offices in the South.

Currently, Republicans dominate Southern state politics. All but three Southern states have GOP governors, with only Louisiana, Virginia and West Virginia led by Democrats. The balance of power in Southern state legislatures is even more lopsided: Out of 26 upper and lower legislative chambers in 13 Southern states, only one — the Kentucky House — has a Democratic majority.

Of course, most Southern states aren't as conservative as the partisan makeup of their state government suggests. As Gallup found in its most recent survey of partisan affiliation, the electorate in most Southern states is either evenly divided between Democrats and Republicans, or leans GOP; only in Alabama, South Carolina and Tennessee did voters fall into the "Solid Republican" category. Republican dominance in Southern state politics can be chalked up to a variety of factors; one of the most important in state legislatures has been the GOP's control over redistricting, allowing Republicans to draw political lines in a way that helps GOP candidates.

But the fact that voters in Southern states are deeply divided — a trend that's only becoming more pronounced as the Southern electorate grows more diverse — also means that Democrats can gain ground, especially in a chaotic election year like 2016 is shaping up to be.

The volatility of the presidential race, for example, could factor into the South's two governor's races in November.

In North Carolina, incumbent Republican Gov. Pat McCrory's matchup with Democratic challenger, Attorney General Roy Cooper, is rated as one of the top gubernatorial contests in the country. Although the elections are still six months away, McCrory's poll numbers have taken a hit in the wake of national backlash against his signing of House Bill 2, the sweeping bill that nullifies local LGBT anti-discrimination and minimum-wage ordinances.

If Trump hurts a little bit, that hurts McCrory a lot. How much can (Trump) lose (North Carolina) by and a down-ballot person still survive? Even two points can be a problem.

The dynamic may be different in West Virginia. Democratic Gov. Earl Ray Tomblin is term-limited, and Republicans currently have the edge for electing his replacement this year. Trump also appears to have more support among GOP voters heading into West Virginia's presidential primary on May 10. However, a recent Public Policy Polling survey found that businessman Jim Justice, one of three Democratic contenders for governor, as an early favorite for winning the race.

The 2016 presidential contest could also influence battle for control of Southern state legislatures.

In 2014, Republicans expanded their majorities in all Southern legislative chambers except North Carolina, where Democrats managed a net gain of three seats in the General Assembly, although both the House and Senate remain under GOP control. And in special elections this spring, Kentucky Democrats held onto their slim advantage in the state House.

But in several states, the unpredictable race for the White House could affect the changing balance of legislative power. The following Facing South/Institute for Southern Studies chart shows the current partisan makeup of the upper and lower chambers in the 13 Southern states: 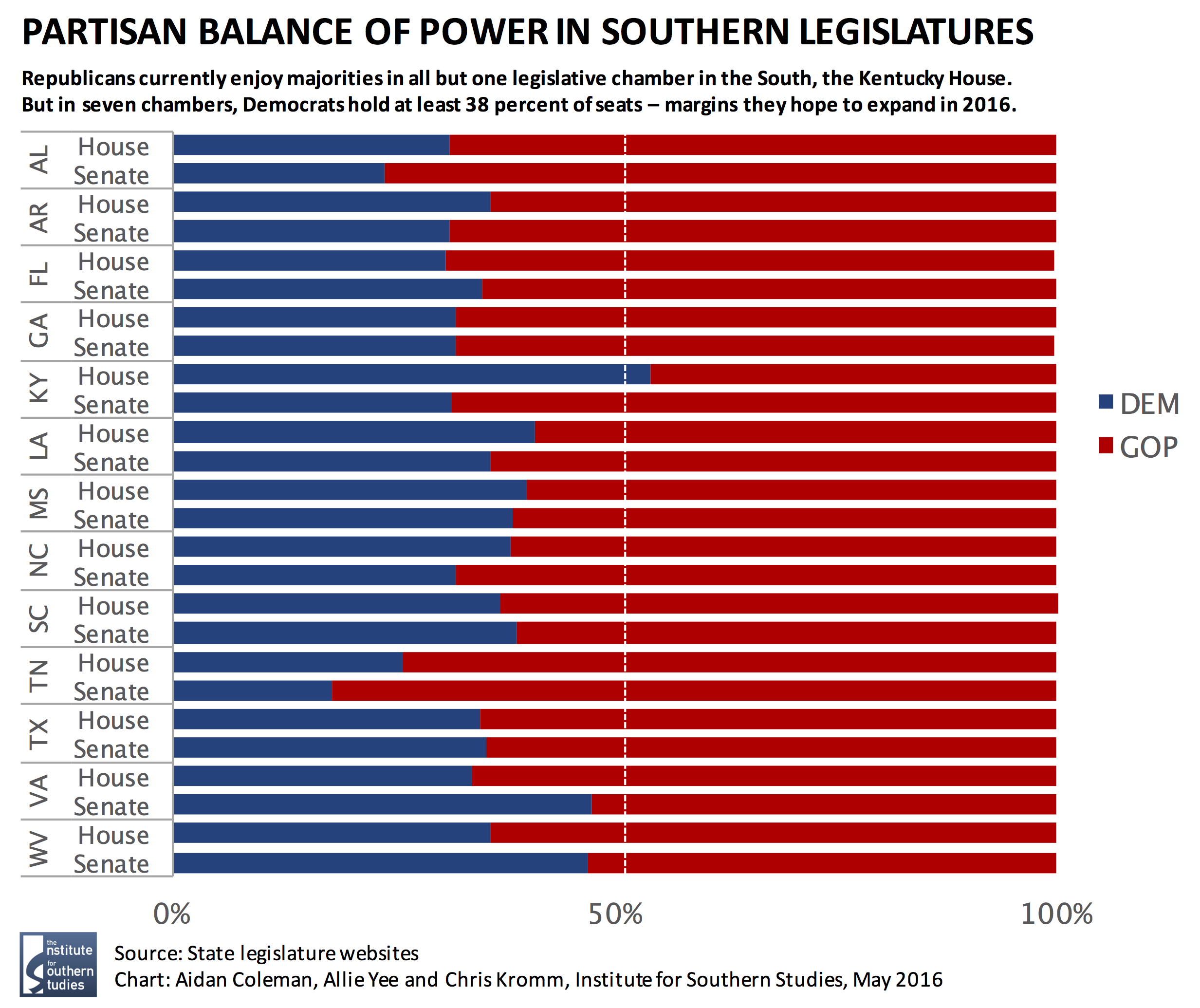 At the moment, Democrats aren't projected to win majorities in any of these chambers in 2016. But were Democrats to pick up even just a handful of seats in 2016, it could make them substantially more competitive. Gains this year would also bolster Democrats in their quest to build enough clout to influence redistricting decisions made after the 2020 elections.

In Louisiana and Virginia — and potentially North Carolina and West Virginia — Southern Democrats have another goal for 2016: to hold enough state legislative seats to prevent Republicans from overriding vetoes made by current or potential Democratic governors.

In all of these contests, Trump's ability to mobilize conservative white voters will clash with the skepticism he faces from moderates, women and the South's increasingly racially diverse electorate.

This looming conflict deeply worries Republicans in states like battleground North Carolina, where former Charlotte Mayor Richard Vinroot said earlier this spring he was "scared to death" of Trump's impact on the rest of the state's races:

We're about to turn our party over to a Trojan horse, a pretend conservative ... (Trump) is an opportunist and this is his latest opportunity. I'm worried about a disaster that takes down senators and everybody else.

Why North Carolina is the biggest battleground of 2016