Protesters gathered at the Texas Capitol on Memorial Day to voice their opposition to SB4, the country's harshest sanctuary city ban. (Photo courtesy of ACLU of Texas.)

Hundreds of immigrant rights advocates from around the country converged on the Texas Capitol on Memorial Day to protest the state's new anti-sanctuary law, Senate Bill 4. Protestors lined the galleries on the legislature's final day and chanted, "Hey ho, hey ho, SB4 has got to go," disrupting the proceedings until they were removed by state troopers.

The bill, signed by Gov. Greg Abbott (R) on May 7, is the crest of a wave of state laws spreading throughout the South that prohibit local governments from passing so-called "sanctuary policies" — local ordinances that limit police cooperation with federal immigration enforcement.

Texas' SB4 is the harshest and most sweeping anti-sanctuary law yet, creating a litany of new rules around immigration enforcement. The law also introduces punishments for local governments found to be non-compliant with Immigration and Customs Enforcement (ICE) or other federal immigration officers, including:

Critics have compared the provision allowing police to ask about citizenship status to Arizona's 2010 "show me your papers" law, which was largely struck down in the courts. Arizona's law required police to ask for immigration papers if they suspected someone was in the country without documentation, whereas Texas' law only gives police the ability to ask rather than requiring it.

According to a Facing South analysis of statewide sanctuary bans, the first anti-sanctuary bill was passed in 2008 in Missouri, the only state outside of the South to pass such a measure. Georgia and Tennessee followed suit in 2009, trailed by Alabama, South Carolina, North Carolina, Mississippi, and now Texas.

These laws are part of an ongoing strategy of conservative Southern states preempting local ordinances coming out the region's increasingly progressive cities, a tactic made infamous by North Carolina's HB2 "bathroom bill." 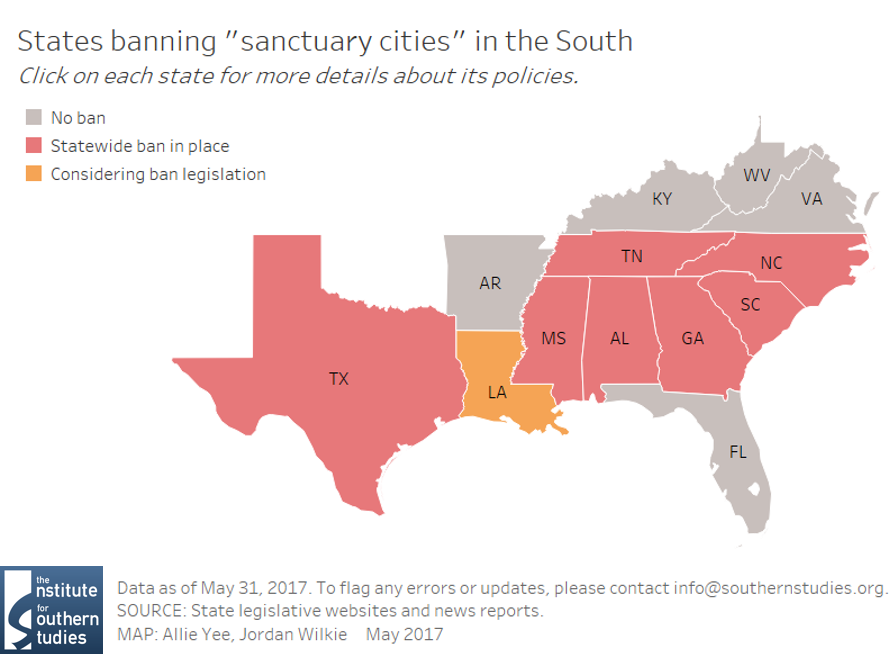 For an interactive version of this chart with details on state-by-state sanctuary legislation, click here.

In Texas, SB4 is set to go into effect on Sept. 1, though it will have to clear mounting legal hurdles before then. The border town of El Cenizo was the first to file a lawsuit, joined by the League of United Latin American Citizens, Maverick County, and the ACLU. The suit claims SB4 violates several constitutional protections, including the sovereign rights of local governments and due process requirements.

El Paso County is also suing over the law. This week, Austin and San Antonio became the first major cities to file suit, with discussions about legal action also underway in Dallas.

Jordan is a master's student at the UNC-Chapel Hill School of Media and Journalism and an intern with the Institute for Southern Studies/Facing South.

Pain of state preemption felt by the South's vulnerable communities