The West Virginia counties that were originally going to be included in a comprehensive test in advance of the 2020 population count. West Virginia has since been dropped from the full test because of budget shortfalls. (Census Bureau map.)

When the U.S. Census Bureau unveiled plans last year for its dress rehearsal for the 2020 census, it made the case that demographic diversity and varying levels of internet access across test sites would provide a "rich environment" to test new methods and troubleshoot problems.

The Bureau announced that its 2018 "End-to-End Census Test" would take place in three very different communities: Providence, Rhode Island, a racially and ethnically diverse city; Pierce County, Washington, the state's second-most populous county and a majority-white area whose seat is the city of Tacoma; and the Bluefield-Beckley-Oak Hill area of West Virginia, a majority-white and mostly rural area. The test involves updating resident's addresses through a door-to-door canvass and advertising, distributing, and collecting a census questionnaire.

But as the proposal noted, the "test and its scope are dependent on funding." After President Trump's budget provided the Bureau with $164 million less than what experts said the agency needed to carry out preparations in the current fiscal year, the Bureau was forced to reconsider its plans.

Last month, Associate Director for Decennial Census Programs Lisa Blumerman announced that the Washington and West Virginia locations would be dropped from all but the test's address canvassing operations, leaving Providence as the sole community taking part in the full 2018 test. She also said that, in terms of funding, "both the amount and timing continue to be risks" for the program.

The news adds to existing concerns about the Census Bureau's readiness for 2020, including cuts to planned 2017 field tests and former Director John Thompson's decision to resign in June rather than at the end of the year as initially planned.

The decision to drop West Virginia from the full test could have serious consequences for Southern states with sizable rural populations, whose political and economic futures hinge on an accurate population count. Census numbers are used to calculate federal funding for certain safety-net programs as well as to apportion congressional and legislative seats.

Adding to the concerns about the 2020 count's accuracy are the Bureau's plans to save more than $5 billion in costs by moving towards an internet-focused system. As explained in the 2020 Census Operational Plan 2.0, advertising for the census "will make heavy use of digital media." The Bureau will also encourage people to fill out the census online, as that costs much less than sending a fieldworker to someone's home.

Consider broadband access in the nine rural West Virginia counties that the Census Bureau dropped from its comprehensive test. According to data from the FCC's June 2016 report, over 31 percent of residents of these counties lack high-quality residential broadband. In Providence, by contrast, only 1.33 percent of all residents lack high-quality broadband access at home, as represented by the horizontal line in this graph (click on it for a larger version): 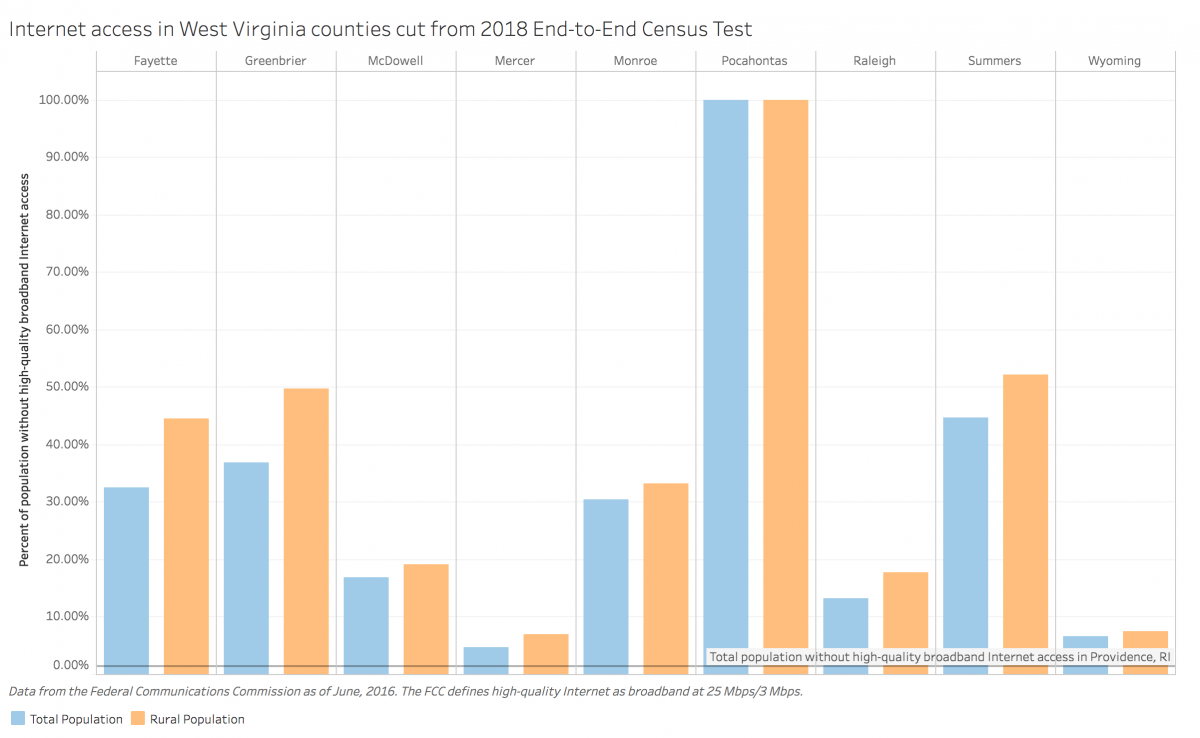 By dropping West Virginia from its comprehensive 2018 test, the Bureau will not have the chance to evaluate its plans to rely more heavily on digital advertising and online responses in a rural area with limited internet access. Address canvassing, the portion of the test that will still be carried out there, doesn't depend on residents' internet connections.

That could have broad implications for the South. While about 19 percent of the country's population is rural, the figure for Southern states is over 33 percent. At the same time, rural areas tend to be more economically depressed and dependent on federal aid. In fact, West Virginia receives the highest level of per capita federal funding at $2,755 per person — some of which is determined by census data.

Emma is an undergraduate at Harvard University majoring in Social Studies and an intern with the Institute for Southern Studies/Facing South.

INSTITUTE INDEX: Taking the census in a pandemic

Census challenges jeopardize efforts towards greater equity in the South