Skip to main content
Join the voice for a changing South.
Donate Today
By Zainab BalochMay 22, 2018

Zainab Baloch speaking at the May 21 action in Raleigh, North Carolina, organized by the Poor People's Campaign: A National Call for Moral Revival. (Photo by Rebekah Barber.)

As part of the Poor People's Campaign: A National Call for Moral Revival, activists across the country rallied this week at the nation's capital and in over 30 state capitals from coast to coast and across the South. It was the second of six consecutive weeks of direct action and focused on linking systemic racism and poverty.

Among those who spoke at the May 21 mobilization in Raleigh, North Carolina, was Zainab Baloch, a young Muslim woman whose life has been changed by the deadly effects of Islamophobia. In 2015, her three friends were brutally slain in Chapel Hill in what many believe was an anti-Muslim hate crime. And last year, when Baloch ran for but did not win an at-large seat on the Raleigh City Council, her campaign became a target of bigotry.

Noting that she was speaking on the fifth day of the Muslim holy month of Ramadan, Baloch juxtaposed her faith tradition's teachings to empathize with others and feel the pain of the most disinherited amongst us with the violence and systemic poverty experienced by her fellow Muslim Americans and North Carolinians.

AssalamuAlaikum (Peace be Upon You). Hello. Hola. Hey y'all.

Powerfully, I stand here today on the fifth day of the holy month of Ramadan. A month where Muslims fast from dawn to sunset as an act of worship meant to foster love for God and love for His creation. One aspect of fasting teaches empathy and the ability to feel someone else's pain.

So how can we use empathy to connect with many of our people today? I think it is necessary for all of us to empathize in order to get a glimpse into the struggle of food insecurity that 1.5 million people — our neighbors — are facing in North Carolina. Fasting helps us feel their pain, suffering, loneliness, poverty and hunger and connects us as humans. Another part of fasting teaches self-control and self-discipline and revives our faith to continue fighting to make OUR country remember their morals.

Ultimately though, empathy is a great start, but it isn't enough. We have to all self-reflect on how we cannot just feel the emotions of others, but also how we can tangibly benefit our community and raise everyone up.

With that being said, using our faith in order to help others is very difficult in our current times and is constantly being challenged by others.

In the very recent past,

Our faith was stolen and used as a fear tactic to elect the individual we are forced to call our president. It was used to trick poor communities to vote for policies that will harm them further. It was used to distract from the fact that 45 percent of Muslim Americans live in poverty — poorer than any other American faith group. That Muslim Americans are three times as likely as other Americans to be without a job and looking for work. Three times.

Our faith was manipulated as an excuse to refuse refugees and immigrants into this country that is a country of immigrants and refugees.

This fear turned into systematic anti-Muslim racism, which has let the government spend almost $2.1 trillion on the war on terror. If we had put that money into education, it would have created almost 38 million jobs and maybe a few more people with morals. This war on our community essentially took money out of the hands of people that needed it and instead used it to generate more hate — hate that prevents our community from living comfortably and safely.

Racism has also directly affected me, like many others. It caused the murder of my three childhood friends. A crime that was rooted in hatred and Islamophobia. A crime that was generated by the rise of anti-Muslim sentiment.

With empathy, I can reflect on the struggles of our community and the death of my friends. We can understand the exhaustion that our family feels. But, let's take empathy one step further. The hunger and fatigue can be used to empower us to create real change in our community. A wonderful first step to creating change is to not just empathize with others but to also come together as a community and recognize that a real problem exists. A problem that will require all of us to work together in order to fix.

I ask that all of us, on this fifth day of Ramadan and during every day, to live our lives with the understanding that there are people in our Muslim family who are constantly shunned and put down just because of their morals. If we can master the art of empathy, then we can begin to take action. We can begin to raise people up and eliminate the waves of Islamophobia and poverty that are currently in place. 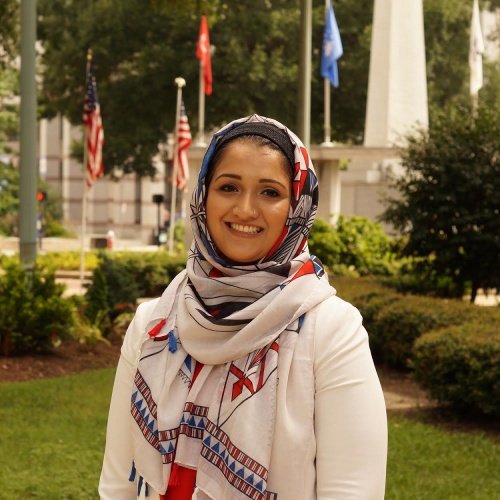 Zainab is a 26-year-old Raleigh, North Carolina, native who was a candidate for Raleigh City Council in 2017. She hopes to help people understand how local policies directly impact us every day, especially young people. She is the founder of YAP! Young Americans for Policy (Reform), which hopes to engage young people in working on creating lasting policy change through social media and direct action.

VOICES: Rules for (dealing with) radicals