Vernon Haltom, executive director of Coal River Mountain Watch, testified before a congressional subcommittee this week about the impact of coal mining on Appalachian communities. (Image is a still from the official video.)

The U.S. House Subcommittee on Energy and Mineral Resources, chaired by Tea Party Republican Rep. Paul Gosar of Arizona, held a hearing this week titled "Assessing Innovative and Alternative Uses of Coal." It featured testimony from three businessmen: Michael Klein, vice president of Lighthouse Resources, a Utah-based company that mines coal in Montana and Wyoming and sells it in Asia; Julian McIntyre, founder and CEO of U.K.-based Arq, which turns waste coal into liquid fuel and is now building its first plant in Kentucky with partners Peabody Energy of Missouri and Swiss oil trader Vitol; and Randall Atkins, CEO of Wyoming's Ramaco Carbon, which turns coal into high-tech industrial products.

Their coal boosterism was counterbalanced by the testimony of Vernon Haltom, executive director of Coal River Mountain Watch, a West Virginia-based nonprofit working to end mountaintop removal mining. Launched in 1998, the organization has been a leader in the policy discussion around the destructive mining technique, which uses explosives to blast off mountaintops to reach the coal below. In 2003, Julia "Judy" Bonds — the group's outreach coordinator, who was known as "the godmother of the anti-mountaintop removal movement — was the Goldman Prize winner for North America. In 2011, at the age of 58, Bonds died of cancer, which disproportionately affects communities near such mining sites. Haltom succeeded her as executive director.

The impact of mountaintop removal mining has been far-reaching. A study that appeared this week in the journal PLOS ONE found that every year between 1985 and 2015 the practice denuded about 21,000 acres of central Appalachia — a total of about 1.5 million acres since the 1970s. The study involved researchers from Duke University, West Virginia University, Google, and the nonprofits Appalachian Voices and SkyTruth. A mapping tool developed by the researchers looked at mountaintop removal over three decades to show with unprecedented precision where such mining has occurred. The researchers also show that mountaintop removal mining today is eating up three times the amount of land to produce the same amount of coal as it did in the 1980s and 1990s.

Haltom's oral testimony, edited for time, was shorter than the written version. (Video of the full hearing is online here.) But it included some details that were not in the written testimony, such as the fact that black lung cases in Appalachia are at their highest levels in 25 years.

"Whether it's coal to Asia, coal waste to oil, coal to plastics, or coal to rainbows and unicorns, that coal is mined from the bones and the lungs of people who can never be fairly compensated for their injuries or their lives," Haltom told the subcommittee.

The mission of Coal River Mountain Watch is to stop the destruction of our communities and environment by mountaintop removal mining (MTR), to improve the quality of life in our area, and to help rebuild sustainable communities. Our previous executive director, Judy Bonds, won the 2003 Goldman Environmental Prize for North America. In 2011, she died of the mountaintop-removal-related cancer that plagues our communities. In 2015, we dedicated our office building as the Judy Bonds Center for Appalachian Preservation. This year, we installed enough solar capacity to meet our electrical needs, and we planted a half-acre of industrial hemp to demonstrate the viability of these rapidly growing, clean economic options.

The Judy Bonds Center is only 10 minutes from the site of the Upper Big Branch mine explosion, which killed 29 miners in our community in 2010. As usual, this disaster resulted from a coal company cutting corners to place profit above people, as well as lax enforcement by regulators. The CEO of Massey Energy recently spent a year in prison for his misdemeanor of conspiring to violate federal safety laws in the worst mine disaster in the U.S. in 40 years.

Had the students of Marsh Fork Elementary School been in class the day of the disaster, they would have felt and heard the blast. As it was, these kids spent every school day within 300 feet of a coal preparation plant and just 400 yards downstream from a 2.8-billion-gallon toxic coal waste sludge dam, nearly surrounded by a 2,000-acre mountaintop removal site. After a six-year campaign, Coal River Mountain Watch secured commitments for a new school just weeks after the explosion. The students began classes in the new location in January 2013. Now, Alpha Natural Resources, which bought Massey Energy in 2011, has begun work on a mountaintop removal site that will include blasting just two miles from the new school, once again endangering the children with respirable silica dust.

From the long history of mine disasters, to the brutal suppression of miners' rights in the coal wars, to the Buffalo Creek sludge dam failure that killed 125 residents in 1972, to the ongoing public health crisis of mountaintop removal, King Coal has ruled West Virginia and central Appalachia with a cruel hand. There is no "life cycle" of coal, just a death march with misery every step of the way from extraction to disposal. None of the schemes or proposals from the other witnesses today do anything to mitigate that misery; instead, they add more steps to the death march.

Whether it's coal to Asia, coal waste to oil, coal to plastics, or coal to rainbows and unicorns, that coal is mined from the bones and the lungs of people who can never be fairly compensated for their injuries or their lives. My fellow witnesses have no proposals to improve the well-being of communities impacted by coal. Instead, they seek to build the wealth of a few at the expense of the many: the many who will pay for subsidies with their tax dollars and pay for gutted regulations with their lives. Three people will die today from diseases associated with mountaintop removal, three people died yesterday, three people will die tomorrow, and more than 1,200 will die this year.

The health impacts are no surprise to anyone living downwind of daily blasting in a state where coal companies detonate the explosive equivalent of 744 Tomahawk missiles every day except Sunday. In some communities, the equivalent of the "Mother of All Bombs" is detonated above their homes on a daily basis, but this is considered a "small blast" by West Virginia Department of Environmental Protection. The resulting clouds of silica dust coat the communities and the people's lungs, and this fallout is a known health threat.

The public health threats of MTR have now been documented in over 30 peer-reviewed studies (https://ohvec.org/mountaintop-removal-articles/health/). These threats include cancer, heart disease, birth defects, and other deadly illnesses at significantly higher rates after accounting for other factors. But state and federal officials have refused to acknowledge the science.

In 2013, the Center for Health, Environment, and Justice (CHEJ) released a report entitled "Health Impacts of Mountaintop Removal (MTR) Mining," for which CHEJ commissioned medical and scientific experts to review the existing research at the time (Statement and Executive Summary at Appendix A). The report called for "an immediate moratorium on MTR mining until health studies have been conducted that provide a clearer understanding of the associations between adverse health impacts, notably adverse reproductive outcomes, and MTR mining." The recommendations aligned closely with the Appalachian Communities Health Emergency (ACHE) Act, first introduced in the House of Representatives in 2012 and presently in this Congress as H.R. 786.

After years of work by Coal River Mountain Watch and allies to have our government seriously acknowledge the science and take action, the Department of Interior's Office of Surface Mining, Reclamation and Enforcement engaged the National Academies of Science, Engineering, and Medicine to review the body of existing research. The review was to take two years and cost a million dollars. The review began in earnest, collecting evidence and testimony and holding public hearings. Then, after a series of meetings with coal industry lobbyists, DOI abruptly halted the review in August 2017. On June 7 of this year, the DOI's Office of Inspector General found that the DOI had no specific criteria in deciding to end the study and that nearly half a million dollars had been wasted because no final product resulted.

The best innovative and alternative use of coal is to keep it in the ground "until we can figure out what's going on." At the very least, we need to pause new mountaintop removal permits unless and until this process can be conclusively demonstrated to be safe for neighboring communities, as called for in the ACHE Act. And before we seek new and clever ways to prop up a declining industry, we need to effectively enforce the laws and regulations meant to protect our citizens.

Department of Interior Office of the Inspector General letter on review of DOI cancellation of NAS studies. http://democrats-naturalresources.house.gov/imo/media/doc/DOI%20IG%20Let... 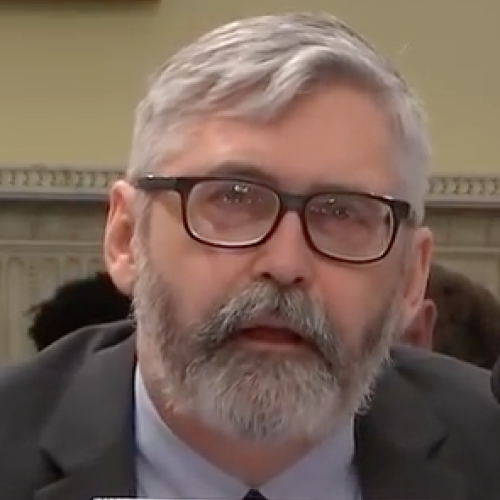 Vernon Haltom is the executive director of Coal River Mountain Watch, a nonprofit working in communities impacted by the irresponsible practices of the coal industry in southern West Virginia.