The fight in Florida and other Southern states for local minimum wage ordinances has run up against legislatures reluctant to share power with local governments, a conflict with roots in post-Civil War politics. (Photo from the Fight for 15 Florida Facebook page.)

New state constitutions adopted in the South after the Civil War gave black men the right to vote and hold office. People who had been slaves were elected to positions in county governments that were formerly dominated by plantation owners and wealthy elites.

Under the Reconstruction constitutions, black men were elected to more than 1,100 local offices across the South, mostly in rural areas. Black sheriffs, magistrates, and election officials impacted the everyday lives of newly free people and were crucial to securing their rights under new state constitutions. Even in communities where blacks did not control local offices, "the advent of Republican rule on the local level — especially when black votes proved crucial in elections — could make an immense difference to freed inhabitants," according to historian Steven Hahn's Pulitzer Prize-winning book, "A Nation Under Our Feet: Black Political Struggles in the Rural South from Slavery to the Great Migration."

Black politicians at the time noted the intense backlash that black local officials encountered. Georgia state legislator Henry McNeal Turner, for example, said that whites "do not care so much about Congress admitting negroes to their halls … but they do not want the negroes over them at home."

The growth in black political power led to a violent backlash from conservatives and elites who had benefited from the old system. Across the South, the Ku Klux Klan and violent mobs intimidated black voters and assassinated their local leaders. In Graham, North Carolina, a black town commissioner and elected constable named Wyatt Outlaw was lynched outside the Alamance County courthouse "because he was a politician," according to a local KKK member. "There was no other crime alleged."

After the federal government abandoned the South to white supremacists, state legislatures again rewrote constitutions to give themselves sweeping control over local governments, including enclaves of black political power.

Some of the Reconstruction constitutions drafted a century-and-a-half ago set up new local government systems to supplant the aristocratic, county-based systems that enforced the harsh rules of slave society. The drafters of the 1868 North Carolina Constitution sought to replace the county system, centered on protecting private property, with "local democratic participation geared toward gathering the community together to make progress together," as Harvard Law professor Daniel Farbman wrote.

Under Article VII of North Carolina's Reconstruction constitution, each county would be divided into townships, which were intended to undermine the county governments dominated by wealthy landowners. Farbman described the theory behind the change: "Townships create political engagement, which forms new political communities, which, in turn, train citizens in the arts of self-government and create the circumstances for economic and cultural progress."

In "A Nation Under Our Feet," Hahn describes the base of black political power that developed in Warren County, North Carolina, and "withstood the full onslaught" of the so-called "redeemers" fighting to maintain the antebellum system. Hahn said this may have set the conditions for economic progress for free black people, noting that one-third of black farmers in the county worked their own land by 1900.

But conservatives opposed the township system and campaigned to end it with appeals to racism and fear of "Negro rule." In 1876, constitutional amendments restored to the North Carolina legislature much of the power it had lost in 1868, including the power to remove and replace elected local governments. In his history of the North Carolina Constitution, John Orth said the amendment allowing the legislature to remove elected local officials was targeted at the counties in the eastern part of the state, where blacks were the majority.

A similar story played out in Alabama, where constitutional amendments adopted at the end of Reconstruction severely limited local government authority. An entirely new constitution was adopted in 1901 with the express purpose of "establish[ing] white supremacy in this state," and it gave the legislature virtually unlimited power over municipalities.

A federal appeals court recently took note of this history when it struck down a 2016 Alabama law banning local minimum wage increases for violating the U.S. Constitution's equal protection clause. In 2015, Birmingham enacted an ordinance requiring its workers to be paid at least $10.10 per hour, but the wage increase lasted only one day. The legislature swiftly passed a law preempting local minimum wage ordinances. The NAACP, its allies, and a group of fast food workers filed suit over the preemption law.

In its ruling in the case, the 11th U.S. Circuit Court of Appeals noted the disparate impact of a law that "immediately denied a significant wage increase to roughly 40,000 Birmingham residents, the vast majority of whom were black." The court also pointed to the problematic racial dynamics surrounding the law's passage: The preemption bill was introduced by a legislator from a Birmingham suburb where only 1.5 percent of residents are black; it was cosponsored by 52 legislators, all of them white; and it was enacted despite every black legislator voting against it.

The 11th Circuit rejected the argument that further proof of discriminatory intent was required. "Today, racism is no longer pledged from the portico of the capitol or exclaimed from the floor of the constitutional convention; it hides, abashed, cloaked beneath ostensibly neutral laws," the decision stated.

North Carolina legislators also have constitutional authority to preempt local laws, and in 2015 they exercised this power in House Bill 2, the notorious anti-transgender rights bill. In addition to requiring transgender people to use restrooms that don't conform to their gender identities, H.B. 2 was also a preemption bill that banned local minimum wage and civil rights ordinances.

Today, nearly every Southern state has preempted local minimum wage increases. These laws have been passed in response to recent efforts by big cities, which include more non-white residents, to increase wages for the lowest paid workers. 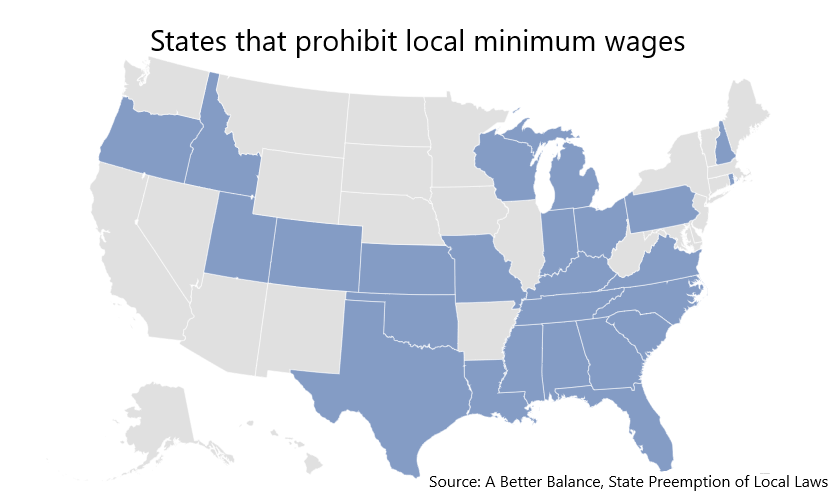 A 2016 article in the American Prospect noted that the rise in laws limiting local authority came "as Republicans have captured an unprecedented number of state legislatures and as cities have become hotbeds for progressive organizing." The American Legislative Exchange Council, which promotes corporate interests in statehouses, even offers model preemption legislation.

Southern state legislatures have preempted local ordinances designed to protect the environment, workers, immigrants, consumers, and others. The Partnership for Working Families, a national network of racial and economic justice advocates, observes that "preemption legislation is often passed by predominantly white legislatures blocking laws benefiting and supported by majority communities of color."

The crucial role of state courts

That state's 1868 constitutional convention was dominated by more conservative factions, and its Reconstruction constitution gave state legislators broad power over local government. The Florida legislature has not hesitated to use this power, such as in 2003, when it passed a law barring cities and counties from increasing the local minimum wage. The following year, voters responded by amending the state constitution to allow local governments to do so.

The city of Miami Beach, where an earlier attempted wage increase had prompted the 2003 preemption law, then increased its minimum wage to $13.31 per hour. The Florida Chamber of Commerce and its allies sued the city, arguing that the preemption law remained in force. A lower court agreed, but the state Supreme Court has decided to hear the case.

As these legal battles between cities and states play out, special interests backed by corporate money have tried to influence who sits on the courts that define the scope of local authority. The Florida Chamber of Commerce, for example, has supported attempts to allow the Republican governor to pack state courts.

And it's not just Florida: In North Carolina, the state Chamber has spent millions of dollars in recent years to elect its preferred legislators and judges. And the Arkansas Supreme Court, whose recent elections have been dominated by national conservative groups that don't disclose their donors, last year struck down a local civil rights law protecting LGBTQ people.

"State officials are trying to overrule the will of the voters, and ban local communities from doing the right thing and protecting their LGBT residents from discrimination," said Holly Dickson, legal director of the ACLU of Arkansas, which defended the ordinance.

(This is the second story in a series on the legacy of progressive Southern constitutions that were rewritten during Radical Reconstruction. To read the first, on the freedom to vote, click here.)