A protest in Washington, D.C., against the nomination of Judge Brett Kavanaugh to the U.S. Supreme Court. (Photo by Mobilus in Mobili via Flickr.)

I'm feeling defeated. Grief-stricken. Exhausted. Just when I'd found a little bit of flow again after Hurricane Florence, the day descended heavy: another trip to the ER with my son, Trump's fascist speech to the United Nations, Kavanaugh, Cosby, #MeToo, my girlfriends' pain, my pain.

The poet and political activist Muriel Rukeyser wrote, "What would happen if one woman told the truth about her life? The world would split open." The first time I read that I knew in my bones that it was true; the more of us that speak our truths, the harder it is for patriarchy and misogyny to punish us for it, to discredit and humiliate us for having the guts to name it. Him. Them.

I know that boys and men are victims too and that any gender can victimize, but today women, girls and transgender folks are heaviest on my mind and heart, and the link between misogyny and racism weighs me down.

We white folks have got our fears all mixed up. No person of color has ever hurt me, no stranger has ever hurt me. Only white men and white family members have physically hurt me. But white supremacy tries to teach me to be afraid of men of color and people I don't know.

One insidious way racism stays so effective is that it takes our eyes off of white supremacy by scapegoating people of color, especially men of color, and teaching white women to suspect, fear, and even accuse men of color of doing us harm.

What if the friends of Carolyn Bryant, the woman who falsely accused 14-year-old Emmett Till of grabbing and verbally threatening her, helped to protect her from the abuse her husband was rumored to have doled out? What if her husband's white male friends and family intervened to stop him altogether? What if he'd stopped his damn self? Maybe the murderous lie that she enabled and perpetuated would never have been told. Racism and misogyny and a white woman's internalized lie of white supremacy killed that beautiful boy as much as those two sick white men did.

Imagine if we white women had banded together with enslaved women and girls and prevented our husbands and brothers and uncles and sons from raping them. What a force we could have been! ICE reports more than a thousand accusations of sexual assault between 2013 and 2017 in immigrant detention centers. What if we white folks descended there in droves right now to be in solidarity with our Brown sisters?

I'm not blaming white women for rape and slavery, but I'm clear about our role and responsibility. And our potential to shut shit down as we've shown we can in some of the stellar moments of people's history when we unite alongside women of color and organize and follow liberation's lead.

Racism confuses us. If my cousins by blood had not been taught to spend so much time looking outward and spewing racist ignorance about Black people in their town, would they have noticed what their brother was doing to me in their basement? Could one of them have stopped what their daddy did to my mother for years on end? Maybe my fictive kinfolk Aunt Dee and her sons would have threatened to drown Uncle Jay in the Mississippi River before letting him rape my mama if they hadn't been busy cracking themselves up naming their black puppy the N-word, hanging up Confederate flags, and resenting people of color in Somerville, Tennessee, for being just as poor as they were. What those white men did to my mother led to years of heavy meds and meanness, absence and estrangement, hospitals and suicide attempts.

How different would my life be if my cousin apologized to me? If the idiot who date-raped me in my 20s apologized? I can't say I would choose to forgive them right now, but their apology would be a fine start. I want the opportunity to practice radical compassion.

They robbed me of so much: my ability to have compassion for myself, fearlessness, lack of shame, love for my body, healthy intimacy, the joy of sex without flashbacks, confidence, ease, sleep without rape nightmares, energy, healthy emotional boundaries, inner peace, decades free from depression and escapism, my self-worth, self-love. My mama. That's how much deep, lasting damage they did.

But somehow I've managed to function well enough to get through school, get and keep jobs, care for a family. I'm a functioning fucking miracle, is what I am. Yes, that's exactly what we are. Thank you to my survivor sisters, my chosen family, and my movement family for helping me make it this far.

What's in store for my little girl? This moment is seared in my memory: She's reading the paper and whispers, "I can't believe so many people voted for him even though he bragged about grabbing women's privates. I just can't believe it." White women and men who voted for Trump, you hurt my daughter. You hurt women. You hurt trans and queer people. You hurt immigrants. You hurt people of color. You hurt yourselves.

Racism keeps us from seeing the real enemies, white supremacy and patriarchy.

I recently read an important Facebook post from a childhood friend who's someone I dated for a while. He writes about witnessing frat boy culture Kavanaugh was steeped in during his own high school days. Although he didn't participate in it, he wonders why he didn't do anything to counter it even though he and others heard rumors about sexual assault or had friends who were victims tell them about it. He doesn't think he ever crossed a line with intimate partners — he never did with me and it truly helped me heal — but he apologizes anyway to anyone he may have harmed. He calls on himself and others to do better. I thank him. I thank his mama.

For caregivers who have intentionally taught children and loved ones how to be intimate and connected without harm, bless you a million times over. If your loved ones harmed anyway, my heart breaks with you. Know that your repeated conversations are up against centuries of history, institutions, structures, and a culture steeped in misogyny. Until more of us – especially men (please, brothers, please) speak up, take responsibility, make amends, make change, we will continue to collectively suffer in excruciating ways.

How different would my life be, would all our lives be, if men consistently practiced interrupting misogyny and dismantling patriarchy? If men didn't rape and assault and objectify and diminish us? If men taught boys – a thousand times and then again – what consent means, every time, all the time, no matter what? If men blew up Facebook and Twitter and Instagram and personal interactions and art and books and walls and murals and speeches and so much more in a million different ways with a barrage of demands to end rape? I delight in imagining it – especially because I envision racism on its last little leg tumbling down the mountain right there alongside the fall of the patriarchy.

For my daughter and because of everything I just wrote: I'm in the movement for the long haul. It is literally about our survival, and it is all connected.

Raise a glass to the truth-tellers and change-makers, the Dr. Blasey Fords and the Ms. Hills, to the #MeToos and the rabble-rousers, to the revolutionaries and the resisters, to the interrupters and the visionaries!

To all beloveds who've been sexually assaulted or raped, I send you love and comfort and tenderness. Be gentle with yourself. Be in chosen community. Rest. Breathe. Heal.

Onward toward a world without rape or racism. 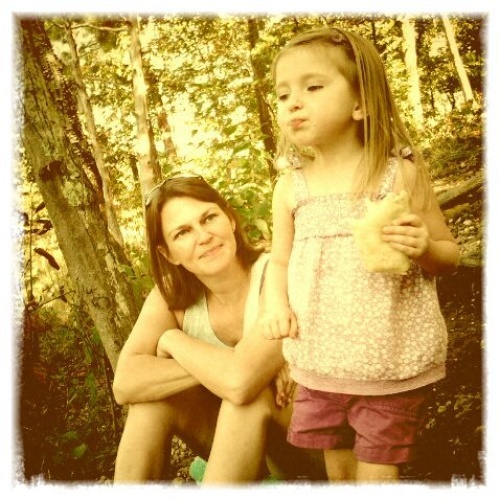 Bridgette grew up in a blue-collar family in Memphis, Tennessee. She has degrees in anthropology/sociology, and has worked as an oral historian, trainer and facilitator, and in various roles with nonprofits. She's an activist with a longtime commitment to race equity and organizing for social justice. Bridgette has lived for nearly 20 years in North Carolina, where she and her partner stay busy raising two children, tending to a posse of foster animals, and fighting the good fight.

The strange death of Lennon Lacy: Another lynching mistaken for suicide?