New data suggests that the South will enjoy a net gain of congressional seats and Electoral College votes after the 2020 census. But at least two Southern states could lose representation, and undercounts in communities of color could dilute their political power. (Image: U.S. Census Bureau)

As the embattled U.S. Census Bureau ramps up operations for the decennial population count, including opening more than 240 field offices and recruiting thousands of field staff, recent data reveals the political importance of an accurate count in 2020, especially for Southern states.

Thanks to fast-growing populations in Florida, North Carolina and Texas, Southern states are projected to add six congressional seats and Electoral College votes after the 2020 census count, according to estimates released in December by Election Data Services and Polidata.

However, both political consulting firms also predict that Alabama and West Virginia are likely to each lose a congressional seat after next year's census, lowering the net gain in Southern states to four new members of Congress. What's more, a feared undercount in African-American and Latino communities in the South threatens to dilute the political voice of these communities as congressional and state legislative maps are redrawn after the 2020 census is completed.

In recent decades, the nation's population has steadily shifted to the South and West. The latest population estimates from the U.S. Census Bureau suggest that these trends will continue into the 2020 population count, with Florida, North Carolina and Texas showing the biggest gains.

By U.S. law, the new state population numbers must be delivered to the president by Dec. 31, 2020; after that, states will be notified about the number of the nation's 435 total congressional seats to which they are entitled. That will also impact states' Electoral College votes for president, which are based on their number of congressional representatives plus their two U.S. senators.

The recent projections by Election Data Services and Polidata are in line with estimates shared by many demographic experts in recent years: that Texas will benefit most from the 2020 census, adding three congressional seats and Electoral College votes, while Florida will add two. North Carolina is predicted to join a quartet of states in the West — Arizona, Colorado, Montana and Oregon — that are expected to add one each. 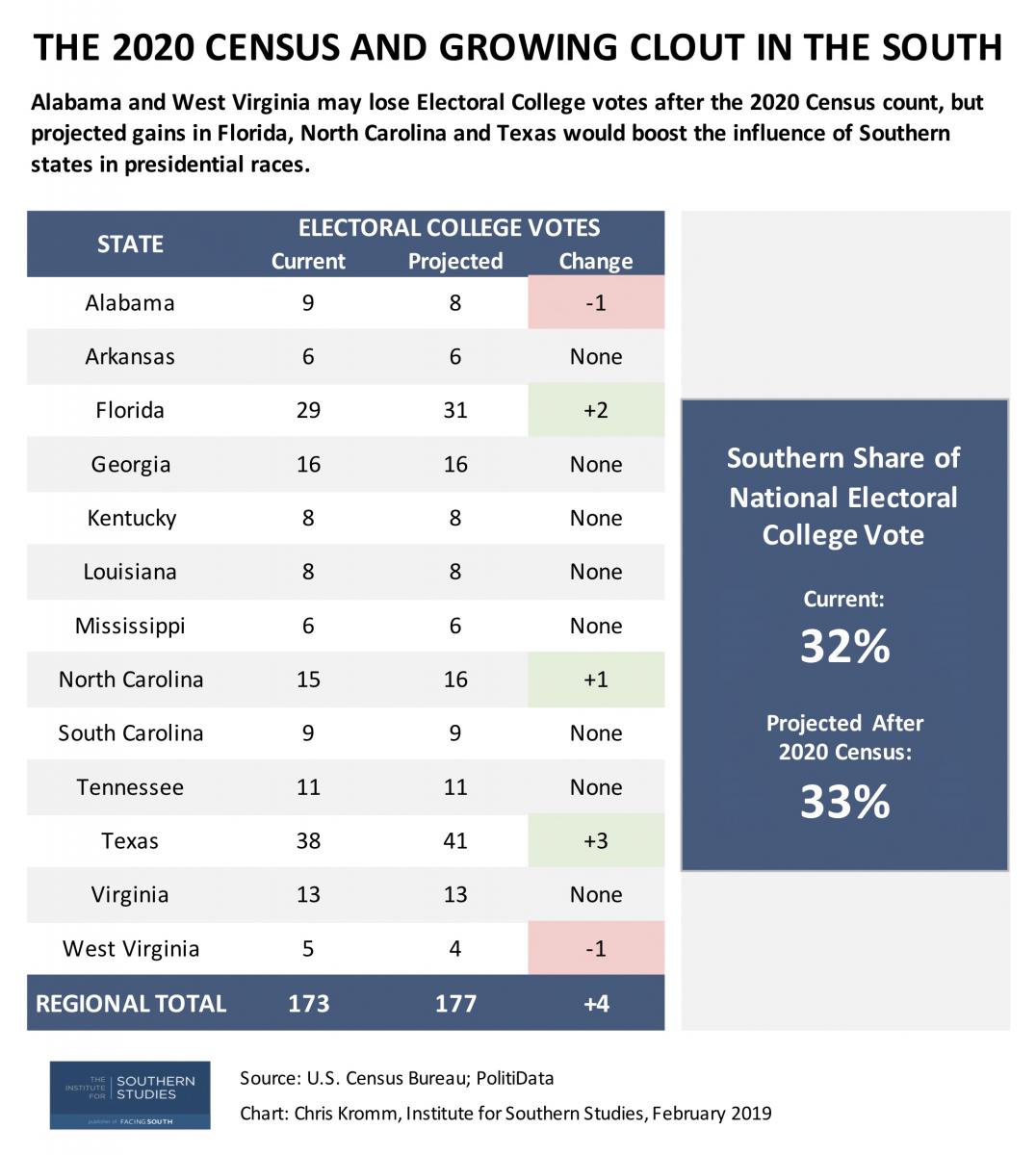 These gains will largely be at the expense of states in the Midwest and Northeast, which could lose up to nine seats after the 2020 tally is completed. But two Southern states are also among those expected to lose a congressional representative: Alabama and West Virginia, where declines in rural communities have caused state population to fall behind national growth trends.

The latest projections about expected winners and losers from the 2020 census came as little surprise to census watchers, although it brought into sharper focus how power will likely shift. For example, both Election Data Service and Polidata say new Census Bureau numbers solidify the odds of Texas gaining a third congressional seat, a prospect less clear a year ago.

The latest projections highlight how the demographic and political fortunes of Southern states have diverged over the last 40 years. Population has boomed in Florida and Texas, states which, if the 2020 projections hold true, will have gained six and nine new congressional seats, respectively, since 1990.

Georgia, North Carolina and South Carolina have also grown, but more modestly; if the latest predictions are accurate, the net gain between the 1990 and 2020 census counts will add up to six congressional seats. 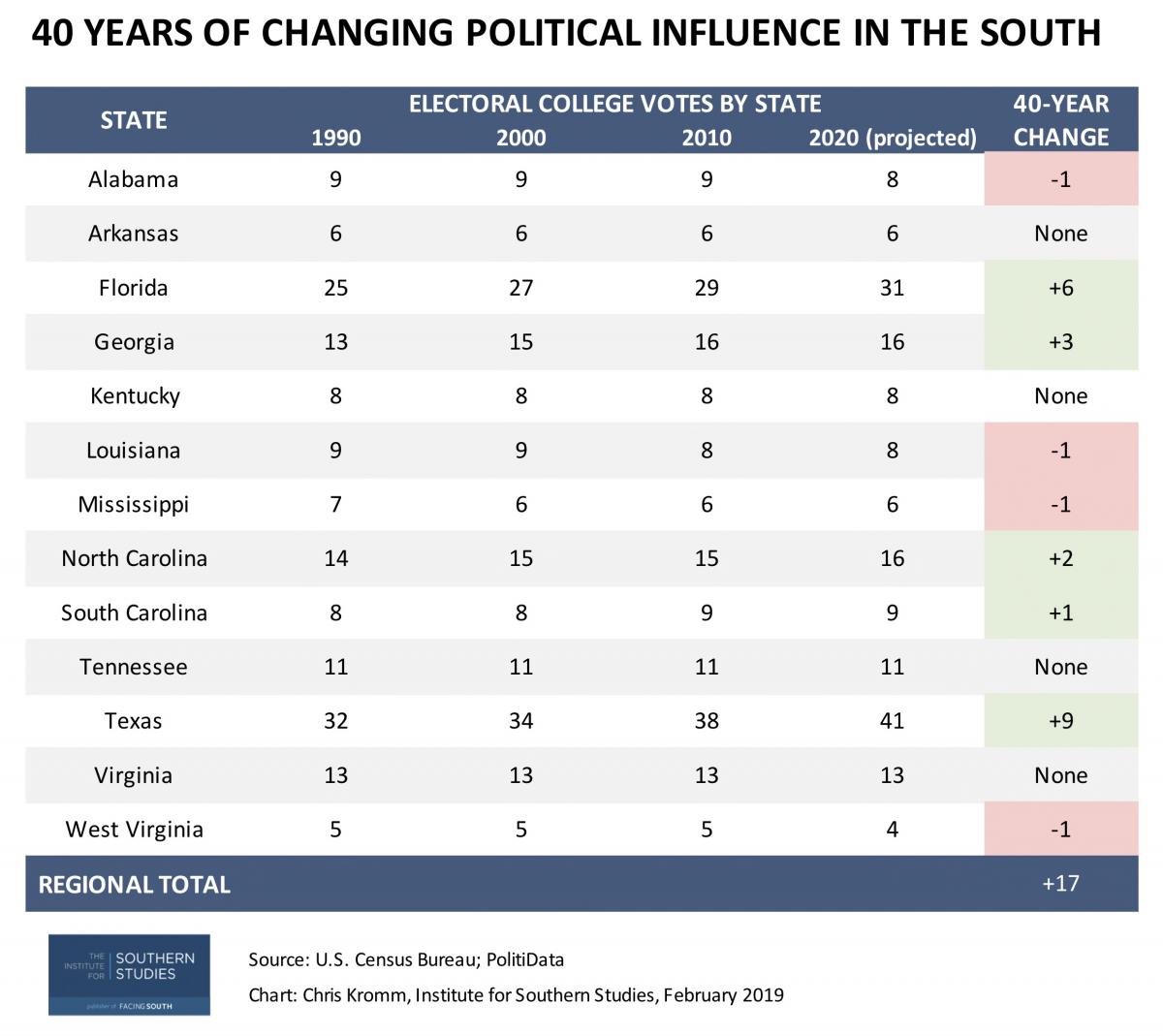 At the same time, states in Appalachia and the Deep South have seen their national political clout stagnate or slightly decline. If Alabama and West Virginia give up a congressional seat after 2020 as expected, they will join Louisiana and Mississippi among Southern states losing representation since 1990. Arkansas, Kentucky, Tennessee and Virginia are projected to neither gain nor lose seats in 2020, just as has happened over the last three census counts.

Another key factor in how the 2020 census will affect political representation will be the Census Bureau's ability to reach "hard to count" populations. Through years of research, census experts have identified key groups that are typically undercounted in the census, including low-income residents, young children, and highly mobile or homeless populations.

With close to half of the nation's African Americans living in the 13 Southern states, the census' persistent undercounting of black communities risks undermining the South's national clout. Alabama, for example, is one of three states considered closest to the cutoff line for losing a congressional seat in 2020; the fact that 27 percent of the state is African American and at greater risk of being undercounted makes it all the more likely it will end up losing representation.

Another factor that could skew the census count in the South is the addition of a citizenship question. In January, a federal judge in New York blocked the Trump administration's controversial addition of a question about citizenship on the 2020 census form; another lawsuit opposing the question was heard last month in California. Over the last two decades, Southern states have seen a rapid increase in new immigrant populations. Civil rights and immigration advocates have argued the citizenship question would increase fear of government intrusion and lower response rates of both documented and undocumented immigration communities.

The disproportionate undercounting of African-American and Latino communities affects representation in another way: by exacerbating the impact of gerrymandering. Over the last decade, a growing body of research and litigation has challenged racial gerrymanders — especially in Southern states — in which largely Republican state lawmakers have created congressional and legislative districts that "pack" people of color into certain districts while "cracking" and diluting their influence in others.

A census undercount of people of color will only make it easier for state lawmakers to diminish the political voice of these communities. According to Mike Sayer, co-founder of the advocacy group Southern Echo in Mississippi (a state that is 36 percent black), "To render people invisible [by not counting them in the census] means you can hide them, pack them into a single district without having to create a fair representation that would be required if they had been counted."

The threat that a census undercount poses for undermining the political voice of disenfranchised communities has spurred hundreds of groups from the local to national level to campaign for a fair and full count in 2020, a "get-out-the-count" effort on par with election-year voting mobilizations. As Derrick Johnson, president and CEO of the national NAACP, said after last year's mid-term elections:

We must also prepare for the 2020 Census, and the imminent threat that the 2020 Census will substantially undercount African-Americans and other people of color in communities throughout the United States. Such a dramatic undercount will especially dilute the votes of racial and ethnic minorities, deprive their communities of critical federal funds and undervalue their voices and interests in the political arena.

Meet the South's history-making winners in this year's elections

Demographers: The South, and its political clout, will keep rising