A sign marking the entrance to North Carolina's Soul City. (Photo by Tijuana Brass via Wikipedia.)

In 1969, the civil rights movement was at a turning point. Martin Luther King Jr. had been assassinated the previous year, and many were wondering where the movement should go from there. North Carolina civil rights leader Floyd McKissick, who practiced law in Durham, began to dream about what it might look like if a city could be built from scratch that welcomed everyone and offered Black people something they had been denied elsewhere: equality. In rural eastern North Carolina's Warren County, at the site of a former slave plantation about 60 miles northeast of Durham, McKissick envisioned the community he called Soul City.

McKissick worked quickly to put his plan into action. In 1972, he successfully obtained funding from the U.S. Department of Housing and Urban Development (HUD) as one of 13 model city projects under the Urban Growth and New Community Development Act that was part of President Johnson's Great Society and War on Poverty. The funds were aimed at attracting industry and jobs to Soul City as well as building residential housing. The project even received support from President Nixon, whom McKissick had strategically endorsed in 1972. 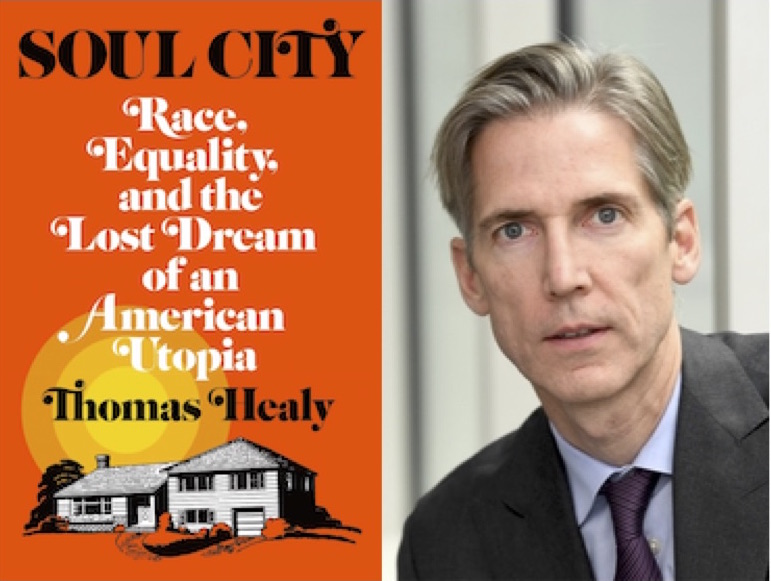 But not long after Soul City’s development began, The News & Observer newspaper of Raleigh published a series of articles accusing the project of mismanaging funds. These articles prompted U.S. Sen. Jesse Helms — an ardent opponent of civil rights — to call for a federal audit. The investigations as well as lawsuits led to the project's foreclosure in 1979, even though the audit cleared the developers of wrongdoing. One of the buildings has since been purchased by the nearby Warren County Correctional Institution for expansion. McKissick died in 1991.

Thomas Healy, a North Carolina native and former News & Observer reporter who is now a professor at Seton Hall Law School in Newark, New Jersey, tells the story in his new book "Soul City: Race, Equality, and the Lost Dream of an American Utopia." We recently spoke with Healy about the lessons Soul City holds for today. The interview has been lightly edited for clarity.

What led you to write this book about Soul City?

I had heard about Soul City when I was a reporter at The News & Observer. The whole idea of it sounded intriguing to me at the time. It was initially misdescribed to me, as I make clear in my book. It was described as an all-Black city, when it was never intended to be all Black. I didn't know much about it at the time, and it always stayed in the back of my mind. As a former journalist, I'm always interested in and looking for compelling stories.

In 2013 I had published another book ("The Great Dissent," about Supreme Court Justice Oliver Wendell Holmes and free speech, which won the Robert F. Kennedy Book Award), and I was looking for a new book idea. I remembered Soul City and did some initial research and discovered that it was targeted with a smear campaign and was largely cleared of the charges that were levied against it. And yet as a result of the attacks, it was never able to succeed in the way Floyd McKissick had envisioned.

There is something about that that bothered me and also struck me as really important and revealing. There was a lot about the story that resonated with things that were happening in 2014. This was around the time of the protests in Ferguson, Missouri. Obviously, a lot of it was triggered by the police killing of Michael Brown, but there was a lot more behind it. There was this frustration and bitterness that had been burning for decades because in this community where two-thirds of the population was Black all of the levers of power were controlled by white people.

There were a lot of parallels between that and Warren County in 1969 when Floyd McKissick announced plans for Soul City. Warren County was also two-thirds Black, and all of the governmental bodies were controlled by white people. It seemed to me that Floyd McKissick was trying to achieve what the residents of Ferguson were trying to achieve, and that their protests were rooted in the same frustrations and aspirations.

There were a couple of things that led me to conclude that it was appropriate for me to write the book. I did at points in the project wonder if I was the best person, because part of writing this involved trying to really understand what Floyd McKissick, a Black man, wanted and what he was trying to say that Black people, more broadly, wanted. Coming from a different background and having a different skin color, I did worry sometimes about whether I could fully capture that and fully understand it.

But there were a few reasons that I decided to ultimately go ahead with it. First, I am from North Carolina, and I worked at The News & Observer. I am very familiar with the history of North Carolina and the political backdrop of the story. I know the lay of the land and the figures involved in the story. When I was at The N&O, I worked several years in Durham, so I knew the history of Black leadership there. Also, having worked at The N&O I felt like I have a real, personal connection to the story because of the role the N&O played in the demise of Soul City.

Soul City was not successful for a few different reasons, but Floyd McKissick was able to get government funding and backing. Do you think the federal government ever intended for Soul City to succeed?

It's important to distinguish among different actors in the federal government. Congress passed the law that allocated a certain amount of money toward the construction of Soul City. Then you had the high-level officials at HUD and the Nixon administration who ultimately authorized money to be used on Soul City. Then there were civil servants at HUD who were working closely with McKissick to get Soul City off the ground. Maybe the answer is different for each of these actors.

The HUD officials who approved Soul City — I think they were always concerned about its feasibility because it was a very challenging project, to try to build a city in the middle of nowhere. Floyd McKissick addressed these concerns sufficiently enough that they were willing to grant him a loan guarantee, but I suspect they thought it was a long shot, even when they approved the money.

The inspiring thing for [McKissick] was watching French villages that had been destroyed be rebuilt by French engineers and planners. His unit was assigned to participate in this by clearing rubble and assisting in the rebuilding of these towns. He got this vision that it was possible to rebuild a city from scratch and that Black people could do that in the United States.

I think it's fair to say that the odds were against him. Everything would have had to go right for this to really work out the way he envisioned it.

The staffers, I think, really wanted Soul City to succeed. My research shows that the staffers were probably the most sympathetic to what McKissick was trying to accomplish, in part because they had the most contact with him.

McKissick was not naïve. He knew that Nixon was being strategic, but I think he realized that there could be benefits in Blacks not allowing the Democrats to take them for granted.

Soul City is often framed as a utopia. But as you write, it was a city that was envisioned as a place where Black people could have the rights and resources that white people were already accustomed to.

His experience in the military was mixed. He wanted to be a pilot. When he went to the recruiting office they told him he would be able to, but later it became clear that he wouldn't. He served, as a lot of Black soldiers did, in support roles in combat.

He faced a lot of discrimination in the military. When he returned he was very discouraged that, having risked his life for the country and been awarded a Purple Heart, the country wasn't more willing do things for him and other Black soldiers.

The inspiring thing for him was watching French villages that had been destroyed be rebuilt by French engineers and planners. His unit was assigned to participate in this by clearing rubble and assisting in the rebuilding of these towns. He got this vision that it was possible to build a city from scratch, and that Black people could do that in the United States.

As I try to make clear in the book, McKissick was also building on his own experience. He grew up in a place where all the power was in the hands of white people. He was constantly being told that he doesn't belong — as he put it, "he was a Black boy in a white land."

I think he wanted to change that. Why couldn't he live in a Black land? Just like Black people had to exist in a white society, why couldn't white people exist in a Black society? I think those seeds were already being planted, and when he saw cities being built it clicked for him.

As you write, one of the greatest tragedies of Soul City is that it is currently a site of a prison. Can you talk about the lessons from Soul City for the ongoing struggle for Black economic power?

There are some practical lessons, then there are some broader lessons. A practical lesson is that economic equality is hugely important, and it still hasn't been achieved. The racial wealth gap has hardly budged since McKissick announced his plans for Soul City. Without economic independence and economic equality, it is really hard to have political independence and political equality because you're at the mercy of the people who have wealth.

Another lesson is that there needs to be greater investment in Black communities and Black institutions and businesses so that wealth can be accumulated and there can be economic equality. It is not just about better paying jobs; it's also about actually having some control of the capital.

All of the policy prescriptions you see being proposed now are important: preserving and expanding voting rights, increasing investment in Black communities, dismantling the new Jim Crow, etc.

The broader lesson is about power. Too often, white people in positions of power are unwilling to listen to what Black people are saying they need. Even people who were sympathetic to civil rights rejected Soul City or did not even take it seriously.

I think it's true that Black people know what's best for their community, but many people did not even try to listen to McKissick's idea.

Is there anything else you would like people to know about Soul City?

I hope that people will know about Soul City and respect the vision and the people who spent their lives trying to build Soul City. It's not fair to those people that Soul City has been forgotten, and when it is remembered it's remembered with a kind of embarrassment.

Very few people outside of North Carolina and historians of the civil rights movement know who Floyd McKissick was and the important role that he played in the movement. I would love to see people to begin to remember and appreciate what Floyd McKissick did.