A voter registration drive on the campus of N.C. Central University in Durham, North Carolina, in 2012. Since then, many state legislatures across the South have passed restrictive voting laws that make it harder for students to cast a ballot. (Photo by Christopher Dilts for Obama for America via Flickr.)

As they did for many of my friends, last year's elections felt personal to me. Our government bungled the response to COVID-19, which has now taken the lives of over half a million Americans; police killed dozens of innocent Black Americans with impunity; and the former president took every opportunity to distort reality and spread a big lie that the results of the election could not be trusted because the electorate — in its youth, diversity, and belief in the truth — was not in his favor.

But it felt good to know I wasn't alone. According to a study conducted by Tufts, 50% of young voters turned out in 2020. In Texas, we saw a 600% increase in youth voter turnout from 2016, with nearly 1 million young voters casting their ballots—  more than in any other election in the state's history.

Yet rather than listen to concerns about our safety, some politicians tried to exploit the pandemic for personal gain, using access to the ballot as leverage to keep their power. From Georgia to Florida to Texas, legislators continue to promote and in some cases successfully pass laws that perpetuate the lies of a stolen presidential election. The ensuing chain reaction highlights the fragility of our democracy, already on weak standing with the neutralization of the Voting Rights Act, still under threat across the country.

In the midst of such precarity, voting represented an opportunity to control my future, which has never felt certain in a time of national confusion and global volatility. That's why bills like Texas's SB7 are a full frontal attack on my freedom to vote and the very foundations of our democracy.

SB7 joined the wave of nearly 400 anti-voter bills moving through 48 state legislatures intended to stifle the progress we achieved during the 2020 election. With just 140 short days in its regular session, Texas led the pack in these efforts with over 40 bills having been filed that would desecrate the tiny temples of our democracy in the polling place. If passed, SB7 would allow intrusive, partisan poll watchers to create disruption and criminalize voters of color in the name of preventing "fraud."

This sends a clear message to the millions of young people across the state that it's more important to suppress our vote than address the relentless attack on our electoral process. While Democratic state House members killed the bill during the regular session by leaving the chamber and breaking quorum, Gov. Greg Abbott (R) revived it during a special session — but the entire Democratic caucus took the desperate measure of fleeing the state for Washington, D.C., to prevent it from becoming law. Rather than being committed to improving our electrical grid so Texans can keep the lights on, our state's top leadership is instead pursuing their unpopular political pet-projects.

Our struggle is nothing new: Students have always faced particularly steep barriers to voting, between a lack of polling places on campus, exclusion of student IDs as a form of identification at the polls, and partisan gerrymandering, which minimizes the impact of our vote.

So, what can we do to fight back against these attacks?

1. Vote. Don't just vote during the presidential contests, but at the local level too. All politics is local, and change trickles up from the grassroots to the top. When you show up for change in your community, our democracy becomes just that much stronger.

2. Get Organized. Join the fight of an organization dedicated to voting rights like The Andrew Goodman Foundation, NAACP, or All Voting Is Local and get to work fighting for the issues you care about most! Young voters are among the most politically engaged age groups, fiercely advocating for change on a broad range of issues, from climate change to voting rights and police brutality. We cannot afford for our voices to go unheard.

3. Advocate. Now that Senate Majority Leader Chuck Schumer has announced the the For the People Act will hit the floor of the Senate later this month for a consequential vote, and President Biden has charged Vice President Harris to lead the way on voting rights, we have to organize and boldly call on our our representatives to support the For the People Act and the John Lewis Voting Rights Advancement Act because every American has the right to free, fair, and accessible elections. Join students across the country putting pressure on their representatives to get this done by signing onto the UN-PAC pledge today!

Even more pressing right now, we need our state legislators to take up bills that would expand the franchise and actually secure our elections by making them fair. We send our representatives to Capitol Hill and our state houses to work for us, not the other way around. Rather than wasting precious time on lies, they should put their efforts into creating new and greater opportunities for every American to participate and have their voice heard. 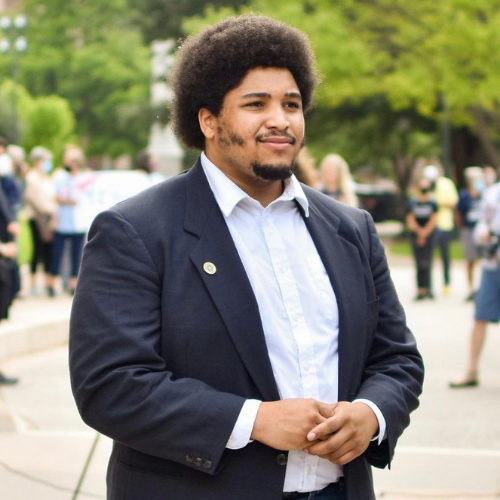 A native of Dallas, Jeffrey Clemmons is a senior studying political science at the historic Huston-Tillotson University in Austin, Texas. Jeffrey has brought his passion for youth civic engagement and desire to uplift underrepresented communities within the organizing space to his role as an HBCU ambassador with The Andrew Goodman Foundation.