James Whitfield lost his job as the first Black principal of the Colleyville Heritage High School near Dallas because he responded to police and white vigilante killings of Black people with an email to students that acknowledged the existence of system racism and called education "a necessary conduit to get liberty and justice for all." Whitfield recently testified before a U.S. House subcommittee during a hearing on curriculum sabotage and classroom censorship, saying educators "have been placed squarely in the crosshairs of political groups who are determined to destroy public education." (Still from official committee video.)

The House Subcommittee on Civil Rights and Civil Liberties chaired by Democratic Rep. Jamie Raskin of Maryland held a hearing on May 19 titled "Curriculum Sabotage and Classroom Censorship" about ongoing efforts to limit discussion in public K-12 classrooms on American history, race, and LGBTQ+ issues, and to punish teachers who broach such topics. Since January 2021, lawmakers in 42 states have introduced legislation or taken other steps to restrict teaching about racism and sexism, and at least 17 states — including Alabama, Florida, Georgia, Kentucky, Mississippi, South Carolina, Tennessee, Texas, and Virginia — have enacted such bans, according to an Education Week analysis.

Among those who offered testimony at the hearing were high school students, free speech advocates, and a parent of a gender nonbinary child in Florida, where state lawmakers recently passed a so-called "Don't Say Gay" bill limiting classroom discussions of sexual orientation and gender identity. Several educators also testified, including James Whitfield, former principal of Colleyville Heritage High School in Colleyville, an affluent, majority-white community near Dallas. In 2020, Whitfield, who holds a doctoral degree in education and was the school's first Black principal, was fired because of his response to the killings of George Floyd in Minnesota, Breonna Taylor in Kentucky, and Ahmaud Arbery in Georgia: He sent what he intended to be an encouraging email to his students acknowledging that systemic racism is "alive and well" and calling education "a necessary conduit to get liberty and justice for all."

The response to Whitfield's email was initially positive but became increasingly angry as the weeks passed — and the case was taken up by the secretly funded right-wing movement targeting public schools over culture-war issues for political gain. Stetson Clark, a former Goldman Sachs employee and recently defeated school board candidate, attended a board meeting in which he angrily denounced Whitfield for allegedly encouraging revolution by being antiracist, as The Guardian reported. Clark also took issue with the fact that Whitfield used his Twitter account to recommend books such as the memoir "A Promised Land" by Barack Obama, "A Fool's Errand: Creating the National Museum of African American History and Culture in the Age of Bush, Obama, and Trump" by Lonnie Bunch III, and "The Color of Law: A Forgotten History of How Our Government Segregated America" by Richard Rothstein. Many in attendance called out for Whitfield's firing.

A few weeks later, the district sent Whitfield a disciplinary letter and placed him on paid administrative leave. The action led to walkouts by students, who also took up Whitfield's case with the school board, to no avail. Under a settlement reached with the district, Whitfield will remain on paid administrative leave until next year, when his employment with the district ends, according to the Texas Tribune. He's not allowed to discuss details about the settlement. Meanwhile, the Grapevine-Colleyville Independent School District last month began considering a controversial proposal to restrict students' access to information on race and gender and label any material addressing human sexuality as "potentially pornographic."

In his prepared testimony to the House subcommittee, reprinted in full here, Whitfield said he witnessed "how toxic things can get when people with nefarious agendas come to town." But he also spoke of how proud he was of the young people who in large numbers took a stand against hatred, and of his gratitude for the many families who supported his own during a difficult, chaotic time. "We are eternally grateful for their love, compassion, encouragement, and support," he said.

Good morning, and thank you Chairman Raskin, Ranking member Mace, and members of the subcommittee for inviting me here today. My name is James Whitfield — I'm a husband, and a father of three amazing children. Most recently, I served as a high school principal in Northeast Tarrant County, Texas, a suburb of Dallas. I'm here today to tell you there is reason for concern.

I chose a career in education because of my school experience. Above all, I want school to be a place where students feel like they belong and they're excited to be each day; where staff are empowered, inspired, and equipped to serve each day; and where families feel connected and have the highest levels of trust as they send their young people into our building each day. I have witnessed what can happen when this environment exists. It's such a beautiful thing.

But I've also witnessed how toxic things can get when people with nefarious agendas come to town. The lies. The bigotry. The intolerance. The racism. Never mind the fact that they don't know you — or even care to know you. They have an agenda and your mere existence threatens that — so they come after you.

If not for public school educators filling some deep holes in my life I don't know where I'd be. From Ms. Duffy, my junior high science teacher who made me truly feel seen at school for the first time. To Coach Carmona who was the first Black male educator I remember during my school experience when I got to 7th grade. He was a representation of what could be. To Coach Stephenson, my high school basketball coach who helped guide me through two pivotal points of my young life — my mother's leukemia diagnosis when I was a sophomore and then, in the spring of my senior year, I became a father at the age of 17. Coach Stephenson wrapped his arms around me, he didn't allow me to wallow in self-pity — he loved me and continued to encourage me. When I sit before you today and tell you that education, specifically, public education, saved my life — I say that from the deepest parts of my soul.

I serve as a public school educator with a deep sense of purpose and conviction like so many who have chosen this most noble profession. Teaching is one of the most complex and multifaceted professions on the planet. Every kid deserves a Ms. Duffy, Coach Carmona, and Coach Stephenson in their lives. Someone who believes in them, inspires them, empowers them, holds them accountable, and, above all, loves them.

But here's what keeps me up at night — we're losing Ms. Duffys and Coach Carmonas and Coach Stephensons left and right as educators continue to be asked to do more, with less, all while navigating the complexities of their role and enduring baseless attacks by individuals with political agendas.

Educators who pour their heart and soul into the growth and development of young people have been placed squarely in the crosshairs of political groups who are determined to destroy public education.

Processes for addressing concerns through procedural means have been overridden by the loudest, most fanatical factions in some communities. Teachers are met with interpreting vague legislation which speaks to not making people feel "discomfort or anguish."

Educators who pour their heart and soul into the growth and development of young people have been placed squarely in the crosshairs of political groups who are determined to destroy public education. They have faced online bullying, calling for their jobs. They have received death threats and hate mail. They have reached points of frustration and exhaustion that I have not seen in my near two decades in this profession.

To be crystal clear, this IS about disrupting and destroying public schools. When they say "Parent's Rights" it's not what it seems. You see, parents have rights. To say they do not is a blatant lie to the public. As educators, we don't build walls between families and our schools — we build bridges. We understand the critical importance of a strong school/family partnership.

We must simply call this what it is … a ploy to divert public school dollars to subsidize private education in the name of "choice." This can't be the way forward. We simply cannot afford to lose true public education. It is key to upward mobility. Every student, regardless of faith, race, socioeconomic status, sexual orientation or any other factor, deserves to be seen, heard, valued, celebrated, engaged, inspired, empowered, and loved each day.

The past several months have been traumatic for my family and I, to say the least. I've witnessed firsthand what an environment can become when the most extreme, vile, hate-filled elements take grip of a community. I've also witnessed large groups of students gain a voice and stand in the face of this hatred. I'm so proud of our young people. They give me great hope!

And, far too often, when mentioning "parents" we've left out the vast majority of families who are adamantly standing against these hateful efforts, as witnessed in my journey. They stood in the gap for my family and I during such a chaotic time and we are eternally grateful for their love, compassion, encouragement, and support.

These concerns are real and have a lasting impact on educators, students, and families and I beg of you to take these threats seriously and do all you can to support us.

I appreciate the time to speak to you all this morning.

Thank you very much for having me. 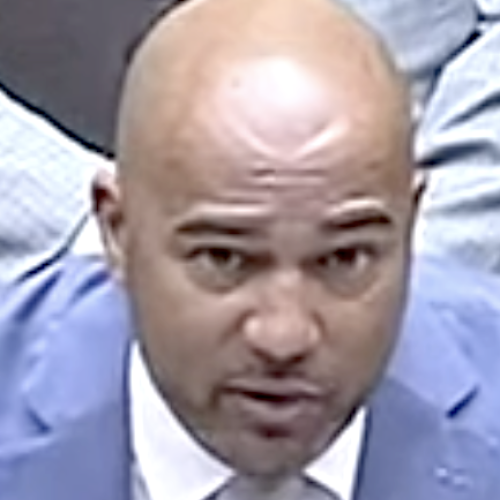 James Whitfield, Ph.D., was the first Black principal of Colleyville Heritage High School in Colleyville, Texas. In 2020, the Grapevine-Colleyville Independent School District fired him after he sent an email addressing police and white vigilante killings of Black people in which he acknowledged the existence of systemic racism and called education "a necessary conduit to get liberty and justice for all."

From Selma to sorrow