What's the most conservative region in the country? If asked that question, many would likely say the South - and they'd have plenty of evidence to make their case.

But regular Facing South readers know better: As we've taken pains to document over the years, the South is far from a bastion of conservatism, and there are plenty of other places that are just as conservative, if not more.

A new poll from Gallup adds more supporting evidence. Every year, Gallup takes a poll of political ideology of each state, based on how residents describe themselves - conservative, liberal, etc. In their 2010 poll, only four of the 11 states rated as the most conservative were in the South: 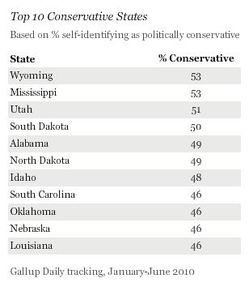 So what region makes up the other seven on the list? As anyone involved in the regional analysis business will tell you, carving up and labeling different parts of the country is tricky business, and likely to start as many arguments as it settles.

But if there's a common thread to the non-South conservative states, it's that their part of that geographic constellation known as the Great Plains. Here's a map of the Plains region: 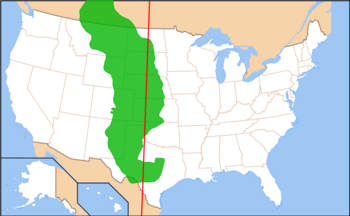 It's not a perfect match, and there are plenty of exceptions (hello, Colorado). But the Plains hold a disproportionate share of states that rank as strongly conservative, even more conservative than the South.

That's where things stand now, but what about the future? That is the key difference between the Plains and the South.

While the ideologies of the Plains and South are closely matched now, the South is undergoing rapid demographic and social changes that are pushing it in a different direction.

Two weeks ago, National Journal covered a story on another trend we've looked at in Facing South: the growing race and generational divide in the country. In short, our nation's older population is whiter, and the younger population is more racially diverse, adding a whole new dimension to the generational battles that ebb and flow through politics.

In the story, Ronald Brownstein notes that there's a regional aspect to the race/generation divide as well: Fast-growing Sunbelt states in the Southeast and Southwest are where the younger and more racially diverse populations are growing most quickly, as shown in this map: 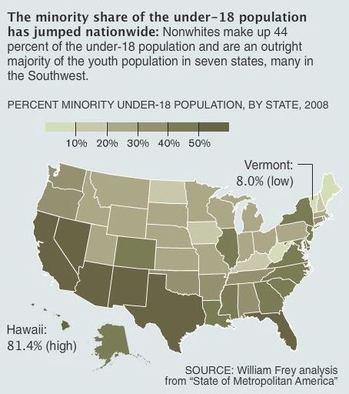 These changing demographics are pushing Southern states in a more politically progressive direction; a glimpse of this future was revealed in the 2008 elections.

By contrast, National Journal's maps reveal that the Great Plains states - especially the Upper Plains, along with Kansas and Oklahoma - have a disproportionate share of older and whiter residents, which is helping to solidify their conservatism.

Again, one can find many exceptions and caveats to this analysis. And there are powerful countervailing forces which can cause these trends to reverse, especially in the short-term: For example, a conservative backlash against the growing political clout of African-Americans, Latinos and other people of color in Southern states.

But in the long-term, the younger, racially diverse South will likely see a much different political future than the older and whiter Plains.

What's the most politically corrupt state in the country?