Skip to main content
Defend democracy in the South.
Donate Today
By Chris KrommNovember 12, 2008
There's a lot of astoundingly superficial and unhelpful analysis floating around about what the 2008 elections mean for the South. But the most egregiously misleading is the notion that the South has become the last remaining stronghold of the Republican party.

The claim is wrong on many levels, which we'll explore in depth later. For now, let's go beyond the red/blue maps and look at the 2008 election results with a map which more accurately captures the political complexity of the country: 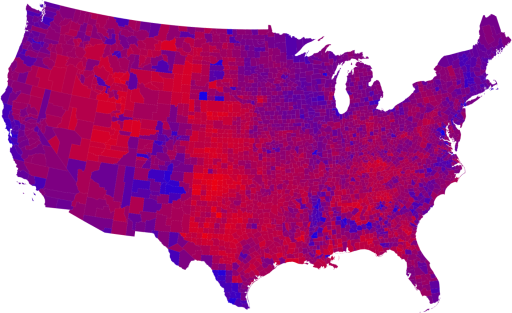 Three things should become clear with this map.

First, the South -- like the rest of the country -- is a richly diverse and divided region, much more than those who write it off as "red state territory" allow.

Second, there's a uniquely strong thread of blue running through the South -- the Black Belt, home to the largest concentration of African-Americans in the country -- and also the most strongly Democratic base in the nation.

Third, if there's any strong concentration of red to be found, it's the Great Plains -- an argument I've made elsewhere. How come no one is talking about the Republican Party being "a regional party based in the Great Plains?"