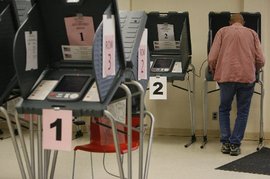 The United States saw dramatic increases in the number of ballots cast by traditionally underrepresented groups, according to an analysis released last week by Project Vote.

In The Demographics of Voters in America's 2008 General Election: A Preliminary Assessment, Project Vote offers a preliminary assessment that 2008 saw a huge surge minority and youth voting. Votes cast by minorities in 2008 increased 21 percent from 2004 while votes cast by whites declined slightly. Votes cast in 2008 by young Americans, ages 18-29, increased by 9 percent from 2004.

From the Project Vote Blog:

Countering the conventional wisdom that voter turnout on November 4 did not change as dramatically as predicted, Project Vote's new analysis demonstrates that African-Americans, Latinos, and young voters cast millions more ballots in 2008 than in 2004.

"The analysis estimated that about 5.8 million more minorities voted in this year's presidential election than in 2004, while nearly 1.2 million fewer whites went to the polls," wrote Greg Gordon of McClatchy Newspapers. "The figures appear to reflect the success of Project Vote and other liberal voter registration groups in registering millions of young, poor, elderly and minority Americans to vote in recent election cycles."

According to study, African-Americans cast nearly three million more ballots nationwide in 2008 than in 2004--an increase of 21 percent. The total votes cast by Latinos went up by sixteen percent--more than 1.5 million--and young Americans aged 18-29 cast 1.8 million more votes, a nine percent increase.  That the overall number of ballots cast did not increase significantly compared to 2004 was in part due to a decrease in voting by white voters.

According to the analysis:

Election 2008: The early voting surge in the South

Election 2008: Facing South analysis -- which Southern states are in play?