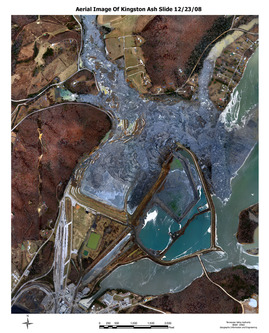 When Tennessee Valley Authority CEO Tom Kilgore testifies Jan. 8 before a U.S. Senate committee about the disastrous spill of 1.1 billion gallons of toxic coal waste from a TVA power plant ash dump in Eastern Tennessee, he'll be speaking before a group of politicians who together have accepted more than $1 million from the electric utility industry in the latest election cycle.

The donors include companies that dispose of an enormous amount of coal combustion waste in these poorly regulated on-site ash lagoons, known technically as "surface impoundments."

Using the most recent data available from the Center for Responsive Politics' OpenSecrets.org website (updated with Federal Elections Commission data as of Dec. 8), the Institute for Southern Studies examined campaign contributions from electric utilities to members of the Senate Environment and Public Works Committee in the 2008 elections. We found that the industry gave members of this key committee a total of $1,079,503.

It should be noted that these are the members of the committee as of the 110th Congress, two of whom -- Larry Craig and John Warner -- are not returning to the 111th. The committee's new membership had not been announced on its website as of the morning of Jan. 7. 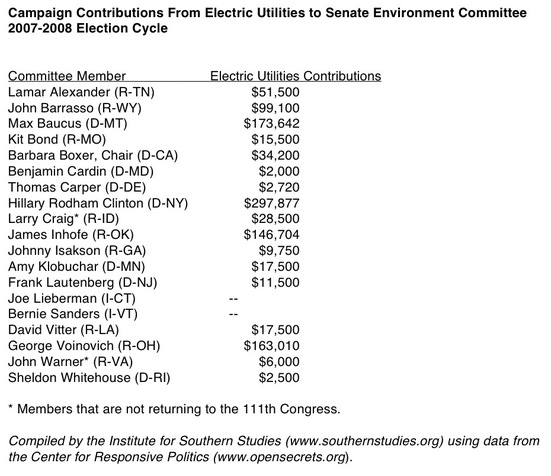 Overall, electric utilities contributed $18.8 million to members of Congress in the latest cycle, according to OpenSecrets.org. The two major parties' nominees for president were the biggest recipients of the industry's largesse, with Barack Obama receiving $612,306 and John McCain getting $521,184. Clinton's contributions put her in third place.

One of the biggest donors among electric utilities was the Atlanta-based Southern Co., which contributed a total of $1,092,552 to members of Congress in the latest cycle. As we showed in our analysis of coal ash surface impoundments in the South, the Southern Co. is a major dumper of coal combustion waste, with its power plants responsible for releasing a total of 24.6 million pounds to 22 on-site surface impoundments in 2006. At the same time, the Southern Co. donated a total of $37,000 to members of the 110th Congress's Senate Environment committee in the latest election cycle -- all but $4,000 of that going to Republican members.

As a federal corporation, TVA does not contribute to members of Congress. But other electric utilities that rely heavily on surface impoundments for coal ash disposal are major contributors. In the latest election cycle, for example, FPL Group contributed $800,667 to Congressional members; American Electric Power, $718,872; Dominion Resources, $691,159; Duke Energy, $634,490; and Progress Energy $379,301.

Electric utilities' clout aside, the members of the Senate Environment Committee have good reason to be concerned about the disaster in Tennessee -- and about the regulation of coal combustion waste more generally.

That's because there are 62 power plants with active surface impoundments in the states that the committee's members represent, according to data from the EPA's Toxics Release Inventory. That number includes 12 each in Missouri and Ohio, 10 in Georgia and five each in Minnesota, Tennessee and Virginia.

In some of these states, environmental damage from coal combustion waste is not just theoretical.

According to a July 2007 EPA report titled "Coal Combustion Damage Case Assessments," the agency has identified a total of 24 sites where there has been proven damage from coal combustion waste, and another 62 sites with potential damage. In addition, the environmental law firm Earthjustice identified another 16 sites [pdf] where it believes there has been damage from coal combustion waste. Of these 102 sites, 15 are located in states represented by members of the committee.

The actual number of damaged sites could be even higher. As Earthjustice pointed out in its July 2007 formal comments [pdf] regarding coal combustion waste regulation, EPA admits that in preparing its damage case assessments it didn't investigate 44 potential damage sites -- almost a third of the total brought to its attention. Earthjustice also charges that EPA's framework for determining damage was designed to minimize the number of proven cases.

At the Jan. 8 hearing and in any discussion about regulatory action that follows, we'll see whether the committee members represent the interests of their political benefactors -- or the interests of citizens whose health and safety has been jeopardized by shoddy oversight of coal combustion waste.