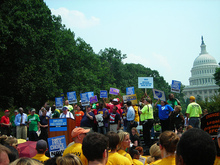 Earlier this month more than 4,000 workers rallied on Capitol Hill in Washington, D.C. to deliver the cards, petitions and signatures of one and a half million Americans demanding the passage of the Employee Free Choice Act. 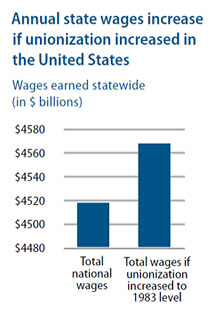 Unions play a major role in providing this sustainability, labor advocates argue. Unions in fact were a key method of economic recovery during the 1940s -- labor groups point out that one-third of all American workers joined unions and shared in economic progress between 1947 and the early 1970s.
Labor history has also shown that unions paved the way to the middle class for millions of workers. The ability to form unions directly corresponds with higher pay for workers. Here's some statistics: Workers in unions earn 14 percent higher wages than workers who are not, are 28 percent more likely to have health insurance, and 54 percent more likely to have a pension. African American workers in unions earn 18 percent more than their nonunion counterparts, while Latinos earn 22 percent more.
According to estimates from the Economic Policy Institute, if 5 million more service workers were to join unions:


It is in light of these types of statistics that unions and labor groups continue to argue that the EFCA could be an integral part of both the economic recovery of the country and play a major role in restoring the middle class. "It is not a panacea, but a modest reform, rooted in the labor laws inherited from the New Deal that responds to the growing failures of those laws...it could not only help workers who join unions but all working people, the economy and the future of progressive politics," writes David Morberg for In These Times.

Labor advocates point out that the passage of the EFCA could have a huge impact on improving wages in the South. Nationally, the "union advantage" that results from having a union is a 12% boost in wage levels. In states that have laws restricting workers' rights to form strong unions, many of which are in the South, the average pay for all workers is lower. The average pay in states with so-called "right to work" laws was 14.4 percent lower than in states where workers have the freedom to form strong unions. Alabama, Arkansas, Florida, Georgia, Louisiana, Mississippi, North Carolina, South Carolina, Tennessee, Texas and Virginia all have these anti-worker laws on the books.
The Road Ahead

In December 2008, Senate Majority Leader Harry Reid (D-Nev.), called EFCA an "important piece of legislation" and promised that the Senate would try to take it up this summer.
Political observers will be watching to see if Democrats can muster the 60 votes needed in the Senate to stop a filibuster this time around. Several Southern Democratic senators are waffling about their support of the measure. Sen. Blanche Lincoln (D-Ark.) has gone on record saying that the EFCA "isn't necessary," which isn't so shocking considering large corporations such as Wal-Mart and Tyson Food have contributed to her campaign over the years.
President Obama and his nominee for labor secretary, Rep. Hilda Solis (D., Calif.), both supported the original bill when it came through the House and Senate the first time. And in recent remarks, President Obama has argued that unions are essential to the long-term health of the economy. "I don't buy the argument that providing workers with collective-bargaining rights somehow weakens the economy or worsens the business environment," Obama told the Philadelphia Inquirer. "If you've got workers who have decent pay and benefits, they're also customers for business."
Needless to say, the national stage is set, and both sides of the issue are already far along their way in fighting what could be the most important battle for labor rights' in a generation.
(Graph from the Center for American Progress Action Fund.)