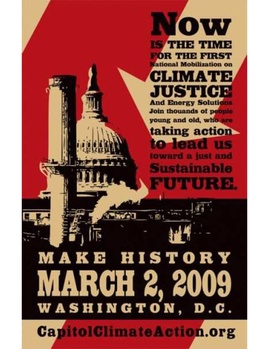 Borrowing a strategy from the Southern Freedom Movement and other successful people's uprisings throughout U.S. history, climate activists are planning a historic rally with mass civil disobedience next month at the U.S. Capitol's own coal-fired power plant in Washington, D.C.

A growing coalition of about 50 groups -- many of them based in Appalachia -- is organizing the March 2 action to draw attention to the urgent nature of the climate crisis. The organizers explain:


...[O]ur intent is to block off access to the Capitol Power Plant by surrounding the entrances, peacefully refuse to leave when asked, and safely disrupt its operations for the day. If by doing so we risk arrest, so be it. We will reflect the growing global movement that is not quietly asking for, but demanding, climate justice.

For several years now, leading activists have been calling for more radical action to force a change in U.S. climate policy. In a July 2007 essay titled "Coal is the enemy of the human race," global warming expert Dr. James Hansen of NASA wrote, "It seems to me that young people, especially, should be doing whatever is necessary to block construction of dirty (no [carbon capture and storage]) coal-fired power plants."

The following month, shortly before he was awarded the Nobel Peace Prize for his work to draw attention to the climate crisis, former Vice President Al Gore told New York Times columnist Nicholas D. Kristof, "I can't understand why there aren't rings of young people blocking bulldozers and preventing them from constructing coal-fired power plants."

We have reported on smaller-scale efforts to use civil disobedience in the fight against dirty energy across the South: at Duke Energy's Cliffside plant in North Carolina, at Dominion Power's headquarters in Virginia, on Zeb Mountain in Tennessee. Next month's action is the first such effort on a national scale to draw attention to the perils of dirty energy.

Originally built to supply the Capitol complex with electricity, the Capitol Power Plant nowadays supplies it with steam and cooled water. The facility produces about 60,000 tons of carbon dioxide a year, according to CoalSwarm's Coal Issues portal on SourceWatch.

Coal represents about half of the fuel burned at the plant. Much of it comes from International Resources Inc., which operates mines in southern West Virginia, and from Kanawha Eagle Coal, with operations in Central Appalachia, Coal Issues reports. International Resources was founded by James "Buck" Harless, who was a major fundraiser for former President George W. Bush. Past efforts to promote cleaner fuel for the plant have been blocked by lawmakers from coal-mining states, including Sens. Mitch McConnell (R-Ky.) and Robert Byrd (D-W.V.).

"There are occasions when outdated laws and policies are unable to ensure justice and the common good," the Capitol Climate Action organizers say. "We have reached such a moment in the struggle to stop global warming. As with Ghandi's walk for independence and Martin Luther King's march for equal rights, history now calls on people of conscience to peacefully take a principled stand on global warming."