Skip to main content
Join the voice for a changing South.
Donate Today
By Sue SturgisMarch 5, 2009 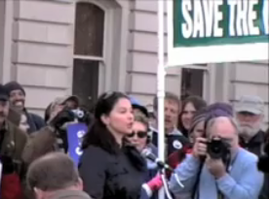 The movement to end mountaintop removal mining is picking up steam.

These efforts come as a growing number of state lawmakers are pressing power companies to phase out the use of coal mined via mountaintop removal.

Yesterday U.S. Rep. John Yarmuth (D-Ky.), Frank Pallone Jr. (D-N.J.) and Dave Reichert (R-Wash.) introduced the Clean Water Protection Act along with more than 100 co-sponsors. The bill addresses a 2002 Bush administration executive rule change that revised a long-standing definition of "fill material" in the Clean Water Act -- a revision that allowed coal companies to dump the waste left over from mountaintop removal operations into streams in the valleys below. The legislation follows a controversial February 2009 federal court ruling that threatens to open the floodgates on a new wave of mountaintop removal mines.

Since 1970, mountaintop removal operations have destroyed more than 470 mountains and 1.5 million acres of hardwood forests in central Appalachia. They've also polluted more than 1,200 miles of headwater streams. The Bush administration's own Environmental Protection Agency reported the practice is having a "disproportionately large impact on the total aquatic genetic diversity of the nation."

"The damage being caused by mountain top removal is irreparable, and each day that we fail to act our water is poisoned, our land is destroyed, and our communities are harmed," said Rep. Yarmuth. "We must enact the Clean Water Protection Act and put an end to the destruction that is devastating the natural resources for families and communities in Kentucky and throughout the region."

Other opponents of the practice are turning to a tactic embraced by the 1980s U.S. student movement against South African apartheid as well as the more recent efforts to halt the genocide in the Sudan: financial divestment.

In his recent State of the University speech, President Michael Engh of Santa Clara University -- a Jesuit institution located in California's Silicon Valley -- announced that the school had divested itself of its holdings in Massey Energy, a major mountaintop removal operator based in West Virginia:


Presidents receive many kinds of letters. They address a wide range of issues, and an early one caught me eye. Two students, Douglas Wheeler and Julia Mock, wrote to protest the university's investment in a company noted for environmental degradation. Massey Energy mines coal through a process of mountain top removal, a process witnessed by the students during an immersion trip to Appalachia. In my inquiries I learned from the president of Wheeling Jesuit University in West Virginia that, yes, Massey Energy causes widespread damage to the environment in that state. This was corroborated by the research of a student intern in Environmental Studies. From our Finance Office I learned that the University did hold a small amount of stock in the company. This investment had been made unknowingly and it contradicted our ethical guidelines for investment. Once aware of this error, we divested. I thank the Finance Office staff, and the students, for such environmental responsibility.

The issue of mountaintop removal also gained some star power recently, when noted film star and Kentucky native Ashley Judd joined with the Sierra Club to call on President Obama to stop mountaintop removal mining. In a letter to the president Judd wrote:

I grew up in Eastern Kentucky, and like so many Appalachians, just seeing our beautiful mountains and valleys tells me I am home. Our mountains are our heritage and our legacy to future generations. But big coal companies are using explosives to literally blow the tops off the mountains, extract the coal and destroy Appalachia.

For more information about the Sierra campaign and to watch a video of Judd speaking at rally organized  by Kentuckians for the Commonwealth, click here.