In the battle surrounding the Employee Free Choice Act, legislators from one Southern state could make all the difference. 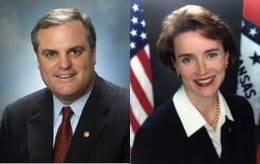 Arkansas could be pushed front-and-center in the coming months as the showdown over the pro-worker EFCA heats up in the halls of the 111th Congress. The votes of Arkansas' two U.S. senators, Democrats Mark Pryor and Blanche Lincoln (pictured), could play a deciding role in the passage of the bill.

The EFCA, seen as one of the most important pieces of legislation in support of labor rights in a generation, was introduced in both the U.S. House of Representatives and the U.S. Senate on March 10th. The bill would allow unions to form when a majority of workers sign cards -- a process dubbed "card check" -- as opposed to drawn-out National Labor Board elections in which companies frequently subject workers to harassment and intimidation (the recent battle at Smithfield Foods in North Carolina being a sharp example of years of employer intimidation that jeopardized union elections.)

The EFCA is being called labor's number one priority this year, and labor rights advocates say that the act's passage could help to restore the balance between workers in their negotiations with employers. Although, the legislation is expected to sail through the House, the question remains whether the bill will get the 60 votes needed to prevent a Republican filibuster in the Senate. The act was first introduced in 2003 and won approval by a wide margin in the House in March 2007, but a Republican filibuster prevented it from coming up for a vote in the Senate. The bill also faced a veto threat from the Bush White House.

For this legislative session Senate Majority Leader Harry Reid has said that the Senate may be able to consider the bill before the August recess. Democrats now have 58 votes in the Senate, and will have 59 should Al Franken win the disputed election in Minnesota. But several senators who supported the act in 2007 are now wavering, threatening to drop that 59 number even lower.

Arkansas' Lincoln and Pryor, as well Sens. Mary Landrieu (D-LA) and Arlen Specter (R-PA) are among those potential critical swing votes, although all of these senators supported the act the first time it came through the Senate.

Lincoln, who faces reelection in 2010, in particular has been very vocal about her lack of support. Following the 2008 presidential election, Lincoln went on record saying that the EFCA wasn't necessary. Last week Lincoln again voiced her disapproval, calling the act "divisive and distracting," and arguing that the Senate should focus on creating jobs and improving the U.S. economy instead. She also told reporters that she had "no commitment" to the bill at this time. Her colleague, Pryor, has also gone on record saying that he believes the current bill is flawed and would consider amendments to make it better.

Observers are wondering if much of the waffling by Arkansas's senators could simply be due to their strong business ties and the power of the corporate lobby in the state.

Calling the EFCA an "Armageddon for business," corporations and their lobbies have been waging a multimillion-dollar PR and ad campaign against the EFCA. Businesses have spent and will spend hundreds of millions on television ads opposing the measure, mainly in states represented by conservative Democrats, such as Arkansas. They have also been spending major time and attention on lobbying efforts aimed at the possible swing Senate votes.

Bentonville, Arkansas-based Wal-Mart has also been heavily lobbying both of Arkansas' senators. Pryor reports that Wal-Mart has raised concerns to him about the impact of the measure.

Indeed, Wal-Mart, the world's largest retailer (and the world's largest company), has been a leader in corporate spending in opposition to the EFCA. In their PR work, Wal-Mart and other businesses have been claiming that the EFCA would unfairly allow union officials to pressure reluctant workers to sign cards. "Everyone should have the right to make a private and informed decision regarding union representation that is free of intimidation and coercion," Daphne Moore, a spokeswoman for Wal-Mart told Bloomberg last week.

The irony of Wal-Mart's use of the words "coercion" and "intimidation" to campaign against the EFCA is pretty evident. Wal-Mart is notorious for its own coercive anti-union tactics, and is considered by labor and human rights groups as one of the largest union-busting firms in the country, often intimidating, coercing and harassing employees to prevent unionization at its stores. 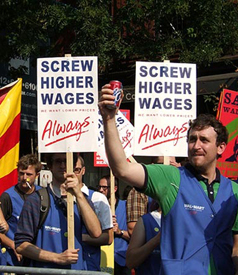 Federal labor law charges have been filed on behalf of Wal-Mart workers in more than 20 states. By June 2008, Wal-Mart had at least 80 class-action lawsuits in 41 states pending against it for worker abuse. From 1998 through 2003, the National Labor Relations Board filed more than 45 complaints accusing Wal-Mart managers in more than two dozen stores of illegal practices, including improperly firing union supporters, intimidating workers, and threatening to deny bonuses if workers unionized.

Wal-Mart's anti-union intimidation tactics are the exact sort of worker harassment the EFCA is set to end. Labor rights' groups point out that workers often choose to pursue "card-check" campaigns simply because secret-ballot elections are easily manipulated by employers during the long pre-election period. Employers often use this extra time to engage in coercive anti-union campaigning to influence workers not to vote for the union. During this period, workers can face harassment, intimidation, and even be fired simply for trying to exercise their right to organize.

Workplace intimidation is one of the biggest barriers preventing workers from unionizing. While waiting for a union election:

With its history of union-busting, labor rights' advocates are not surprised that Wal-Mart has been leading the charge against the EFCA. In fact, Wal-Mart has been playing hard-ball politics. Last fall the Associated Press released an examination of Wal-Mart's lobbying over a three-month span, finding that the company's lobbying expenditures reached $1.4 million, with the money going toward fighting legislation relevant to health, environment and labor issues, including working against the EFCA.

While Wal-Mart's PAC spending was being aimed at anti-EFCA work, Wal-Mart was also working inside its stores to defame the bill. Last fall the Wall Street Journal broke the story that Wal-Mart had been warning its store managers and employees against an Obama victory, saying that a Democratic victory would lead to unionization at Wal-Mart stores. Thousands of Wal-Mart store managers and department had been summoned to mandatory meetings at which the retailer stressed the downside for workers if stores were to be unionized, indicating, not-so-subtly, that employees should not vote for a Democrat.

Despite the complaints about Wal-Mart's strategies, Wal-Mart is still trying to shine up its image. Last December, Wal-Mart, accused of cheating hourly workers and forcing them to work through breaks, agreed to pay as much as $640 million to settle 63 federal and state class-action lawsuits from former and current workers. Many observers believe that the payment was part of the company's campaign to improve its image in front of consumers and legislators ahead of the pending EFCA vote.

Businesses, including Wal-Mart, have also been busy funding major anti-EFCA initiatives and front groups such as the Employee Freedom Action Committee, the Center for Union Facts and the Coalition for a Democratic Workplace. The Coalition for a Democratic Workplace, for example, is funded by the Chamber of Commerce, the Associated Builders and Contractors, and the Wal-Mart-dominated Retail Industry Leaders Association.

As The Hill reported:

The anti-EFCA Employee Freedom Action Committee and the Center for Union Facts have already been running ads in Lincoln's and [Sen. Michael Bennet (D-CO)]'s home states, and the U.S. Chamber of Commerce is targeting Specter and Democratic senators in Louisiana, Nebraska and Virginia with newspaper and radio ads.

For months, the Coalition for a Democratic Workplace had been running radio spots and an advertising campaign in Arkansas specifically targeting Pryor to vote against the bill.

All in all, no one knows what will be the ultimate impact of these corporate lobbying efforts. Last week, Wal-Mart Treasurer Chales Holly said that the company was confident that the EFCA would be defeated.

And Wal-Mart's influence runs deep in its birth state of Arkansas. Let's take Lincoln for instance. According to data compiled by the Center for Responsive Politics, Lincoln has been a direct beneficiary of Wal-Mart, with donors associated with the company giving Lincoln over $35,800 in her career. Lincoln has also received $44,000 from Tyson Foods, the poultry giant with its own checkered record of worker abuses and hostility to unions.

And as the Arkansas News reported in regards to Lincoln's shift on the EFCA:

At least two times when individuals who were called expressed apprehension about Lincoln's indecisiveness on EFCA, they were told in response not to worry about that.

A Region in Need

Labor advocates point out that the passage of the EFCA could have a huge impact on improving wages in the South and play a vital role in the region's economic recovery from the current downturn. Indeed leading economists have explained that pro-worker labor reform should be a key component of any economic recovery program. Employees able to garner better benefits and better wages create a workforce able to move the economy forward -- research shows that one of the primary reasons the recession endures is because workers do not have the purchasing power they need to drive the economy.

And workers seem to be aware of the difference unionization could make. More than half of U.S. workers--60 million--say they would join a union right now if they could. Nationally, the "union advantage" that results from having a union is a 12% boost in wage levels. In states that have laws restricting workers' rights to form strong unions, like Arkansas, the average pay for all workers is lower -- wages in these so-called "right-to-work" states fall 14.4 percent lower than in states where workers have the freedom to form strong unions.

Arkansas has an incredibly low union participation -- unions represented only about 7.3 percent of its workforce in 2008. Research has shown that Arkansas' economy would benefit from more unions -- Arkansas is one of the poorest states in the nation and higher levels of unionization could make a difference in the livelihoods of the working poor. Just look at these numbers:


Research has shown that were the EFCA to pass, an estimated additional 14,157 workers in Arkansas would receive health insurance, while 11,164 would receive pension benefits.

So, as the battle heats up over the EFCA, the question remains: Will swing-vote senators like Lincoln and Pryor prioritize their business lobbies over better labor rights for struggling Arkansas residents? Needless to say, both labor and business groups will be watching closely to see how this all plays out.

A pivotal year for Southern workers