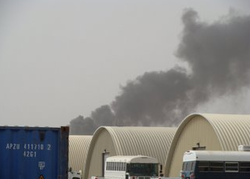 Confronted with the need to dispose of enormous quantities of war-related trash including batteries, pesticide containers, medical waste and even human body parts, but lacking proper incinerators, private contractors working for the U.S. military in Iraq and Afghanistan came up with a simple solution.

They burned the trash in big, open pits.

But now soldiers, contractors and civilians have filed a series of class-action lawsuits against the companies behind the burning, saying the smoke from the pits -- which at times was so heavy it reduced visibility to only a few yards and filled soldiers' living quarters -- contained toxic chemicals that have left them with severe respiratory problems, chronic infections and even cancer.

The suits have been filed in 10 states against Houston-based KBR and former parent company Halliburton by Burke O'Neil, a law firm with offices in Washington, D.C. and Charlottesville, Va. Attorney Elizabeth Burke says her firm expects to file suit in 34 states where people are suffering problems they believe are linked to the burning.

Among the claims regarding a burn pit at Iraq's Balad Air Force Base from the suit filed in Maryland:

On at least one occasion, Defendants were attempting to improperly dispose of medical waste at the open air burn pit by backing a truck full of medical waste up to the pit and emptying the contents into the fire. The truck caught fire. Defendants' fraudulent actions were thereby discovered by the military.

Defendants burned medical waste that contained human body parts on the open air burn pit. Wild dogs in the area raided the burn pit and carried off human remains. The wild dogs could be seen roaming the base with body parts in their mouths, to the great distress of the U.S. forces.

One of the suits was recently moved from Texas state court to federal court in San Antonio. It was filed on behalf of six men including David McMenomy of Lampasas, Texas, who had a football-sized tumor removed from his hip that was suspected of being caused by the toxic fumes from a burn pit at Iraq's Camp Al Taji, the San Antonio Express-News reports:

"They took an enormous amount of taxpayer dollars and did shoddy work," Burke said of the contractors. "The work they did harmed the soldiers and hindered the military mission. In some bases with an Air Force presence, planes could not take off and land because of the smoke."

KBR denies any wrongdoing and says it followed U.S. military rules. Halliburton, which also has headquarters in Houston, questioned why it was named in the suits and denied any legal responsibility. The company, which until 2000 was headed by former Vice President Dick Cheney, spun off its KBR subsidiary in April 2007.

Last month a group of U.S. lawmakers including Sen. Robert Byrd of West Virginia and Rep. Steve Cohen of Tennessee asked the Government Accountability Office to review the Defense Department's safety testing of a burn pit at the Balad base, saying the tests may have "significant methodological problems," the Air Force Times reports.

The lawsuits over the burn pits is the latest controversy for war contractor KBR, which has also been in hot water over the electrocution deaths of  U.S. soldiers due to faulty wiring, exposing troops to a deadly cancer-causing poison, inflating prices for imported gasoline, poor treatment of migrant workers, rapes of women employees in Iraq, and involvement in human trafficking.

The latest in KBR's long "reign of terror"

Is the Army covering up KBR's poisoning of U.S. soldiers?