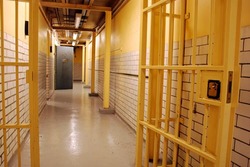 A new report by the Sentencing Project finds that a record number of prisoners are serving life sentences.
According to the report, more than 140,000 individuals are now serving life sentences in state and federal prisons, some 6,800 of whom were juveniles at the time of the crime. In addition, 29% of persons serving a life sentence have no possibility of parole.
The number of life sentences has more than quadrupled in the past 25 years, according to the report. During that period the nation's prison population has also quadrupled, with the South accounting for nearly half of that increase. Tough-on-crime, draconian sentencing policies, including mandatory minimum sentences and "truth in sentencing" laws, as well as cutbacks in parole releases and greater restrictions in parole, have accounted for much of the explosion in prison populations and the expanded length of time that people spend in prison.
As the report underscores, these longer sentencing policies didn't only apply to people convicted of violent offenses, but also for people identified as habitual offenders and those convicted of certain drug offenses.
As the Miami Herald reported:

Nearly two decades ago, Florida enacted mandatory minimum sentencing laws, such as "10-20-Life'" and "three strikes,'" that increased the number of life felons in the nation's third-largest prison system and sharply reduced inmates' ability to win early release or parole.

"Angola was a prototype of a lifer's prison," said Professor Foster. "In 1973, Louisiana changed its life sentencing law so that lifers would no longer be parole eligible, and they applied that law more broadly over time to include murder, rape, kidnapping, distribution of narcotics and habitual offenders."

Professor Foster said sentencing more prisoners to life sentences was an abandonment of the "corrective" function of prisons.

"Rehabilitation is not an issue at Angola," he said. "They're just practicing lifetime isolation and incapacitation."

The Sentencing Project's report calls for the elimination of sentences of life without parole, and restoring discretion to parole boards to determine suitability for release.

VOICES: A step toward occupational licensing fairness for Georgians with criminal records

Drug sentences and the South