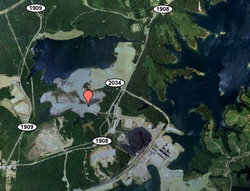 North Carolina Gov. Beverly Perdue (D) has endorsed legislation that would increase oversight of the state's coal ash dumps, the massive surface impoundments that power companies use to store the toxic waste left over after burning coal.

Responding to watchdog pressure, the U.S. Environmental Protection Agency recently disclosed the locations of 44 "high hazard" ash dumps, where a failure of the containment structure -- like the disaster at the Tennessee Valley Authority's Kingston plant in east Tennessee last December -- could kill large numbers of people.

North Carolina had 12 facilities on the high-hazard dump list, more than any other state. It was followed by Arizona with nine and Kentucky with seven, with Southern states* home to 24 of the 44 high-hazard sites. Strikingly, the TVA's Kingston plant was not on the high-hazard list, despite the fact that had the billion-gallon spill occurred on a summer day when people were outside and on the adjacent Emory River lives could have been lost.

Citing her concern over the safety of ash dumps, Perdue last week endorsed legislation introduced by North Carolina state Reps. Pricey Harrison (D-Greensboro), Susan Fisher (D-Asheville) and Grier Martin (D-Raleigh) that would impose tougher state regulations on the facilities, subjecting them to direct inspection by the N.C. Department of Environment and Natural Resources. Inspections are currently the responsibility of the owning companies.

"Because of where some of the ponds are located," Perdue said in a statement, "greater safety oversight and more frequent inspections will help reduce potential risks."

While American Electric Power of Ohio has the most facilities on the high-hazard list with 11, North Carolina's Duke Energy is a close second with 10 -- and several of its ash ponds are located near Mountain Island Lakes, which provides water for Charlotte, the state's most populous city.  Duke maintains that its coal ash storage facilities do not present a safety risk to nearby communities, as spokesman Jason Walls told WFAE radio:


"We're confident -- because of our maintenance and our monitoring and our ongoing inspections that date back to the mid-1980s -- that our facilities are safe."

However, a catastrophic collapse of the containment structure like the disaster at TVA's Kingston plant is not the only safety hazard from coal ash impoundments. A more insidious risk is environmental contamination caused by toxins in coal ash seeping  into nearby surface and groundwater supplies. Among the poisons in coal ash are arsenic, lead, mercury and radioactive elements, as well as cancer-causing combustion byproducts.

A 2007 assessment by the U.S. Environmental Protection Agency found that at least 23 states already have poisoned surface or groundwater supplies from improper disposal of coal ash, including Texas, Virginia, and the Carolinas.

In fact, one of the best-documented cases of environmental contamination caused by coal ash storage is north of Greensboro, N.C. at Duke Energy's Belews Lake (shown on Google map above, with red icon marking the ash dump), created in 1973 to provide cooling water for the company's largest coal-fired station. The contamination there involved selenium, which animal studies found can harm reproductive health.

Fly ash produced by the power plant was disposed in a settling basin, which released selenium-laden effluent in return flows to the Lake. Due to the selenium contamination, 16 of the 20 fish species originally present in the reservoir were entirely eliminated, including all the primary sport fish. The pattern of selenium contamination from the plant and fish impacts persisted from 1974 to 1985. In late 1985, under mandates from the State of North Carolina, the power company changed operations for fly ash disposal, and selenium-laden effluent no longer entered the Lake.

But Belews Lake didn't immediately spring back to good health when the releases stopped. After studying the lake for two decades, U.S. Forest Service research biologist Dennis Lemly concluded that the long-term effects of selenium poisoning may be underestimated. Research he conducted in 1996 -- a decade after the plant halted the discharges -- found that the contaminant was still present at a moderate risk level in the lake's sediment and was accumulating to toxic levels in fish eggs, the Forest Service reports.

North Carolina is also home to another proven environmental damage case involving selenium at Caswell and Person counties' Hyco Lake reservoir, constructed in 1964 as a cooling water source for Carolina Power & Light's Roxboro Steam Electric Plant, now owned by Raleigh, N.C.-based Progress Energy. The state Department of Health and Human Services issued a fish consumption advisory at Hyco Lake in 1988, which was rescinded in 2001 after the company installed a dry ash handling system.

Regulations like the one being considered in North Carolina would help to better protect the public from these kind of slow-motion coal ash disasters by requiring that the impoundments be lined and covered and that monitoring wells be installed to track contamination. But clearly coal ash contamination is not a problem only for North Carolina: The EPA has identified over 600 coal ash sites nationwide with at least 67 proven or potential cases of related surface water or groundwater contamination.

Responding to the EPA's disclosure of the high-hazard ash dumps' location, environmental groups have renewed their call for federal regulation of coal ash as hazardous waste. Administrator Lisa Jackson has said her agency will release a proposed regulation by year's end, and the Sierra Club -- one of the groups that pressed the agency to release the list of high-hazard dumps -- has launched an online campaign encouraging concerned citizens to contact their U.S. Senators about the need for the agency to move forward quickly.

"Now that EPA has compiled this list of 'high hazard potential' sites, the next step is to clean these sites up expeditiously, so that they no longer present a hazard to downstream communities," said Bruce Nilles, director of the Sierra Club's Beyond Coal campaign. "At the same time, EPA must move forward to close the regulatory loopholes that the coal industry has enjoyed for far too long. It is time to require the coal industry to treat coal ash as the hazardous waste that it is."

TVA under growing pressure to clean up its act