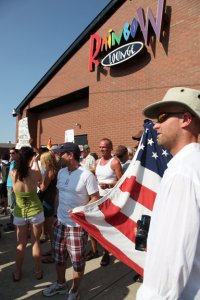 Just weeks after a police raid on a gay club in one Texas city left a patron with life-threatening brain injuries, another Texas city is embroiled in controversy after gay men were kicked out of a restaurant -- and local police took the restaurant's side.

In the early morning hours of June 29, Carlos Diaz de Leon called El Paso police to report that he and a group of friends had been ordered out of Chico's Tacos by security guards because two the men in the group had kissed, the El  Paso Times reports:

De Leon quoted one of the guards as saying he didn't allow "that faggot stuff" in the restaurant.

The men refused to leave and called police for help. In the meantime, the guards -- employees of All American International Security of El Paso -- allegedly directed other anti-gay slurs toward them. When two officers arrived about an hour later, one of them told the group that it was illegal for two men or two women to kiss in public and that they could be cited for "homosexual conduct" under law.

But the officer was wrong. The U.S. Supreme Court ruled the law he was referring to unconstitutional in Lawrence v. Texas in 2003 -- the same year the El Paso City Council passed an ordinance banning discrimination based on sexual orientation by businesses open to the public.

Briana Stone, an attorney with the Paso del Norte Civil Rights Project, told the paper that she found it troubling that a police officer chose not to enforce the city's ordinance:

"This is such a blatant refusal to uphold the law on account of discrimination," she said. "The result is devastating. The Police Department is allowing that and even participating in it by refusing to enforce an anti-discrimination ordinance, which is what their job is."

But El Paso Police Detective Carlos Carrillo defended the officers actions, telling the paper that every business has "the right to refuse service to whoever they don't want there."

At a meeting yesterday, members of El Paso City Council told Police Chief Greg Allen that they were upset with the conduct of his officers. Allen released a statement acknowledging that his officers were wrong about the law and that failure to stay abreast of the law would result in "appropriate discipline." Also yesterday, Diaz de Leon submitted a formal complaint to the police department's Internal Affairs Division.

Meanwhile, protests are scheduled to continue for the third consecutive weekend in Fort Worth, Texas over a June 28 police raid on a gay bar during a Stonewall commemoration that left one man with serious head injuries, the Dallas Voice reports. Seven officers from the Fort Worth Police Department and two agents from the state Alcoholic Beverage Commission clashed with patrons of the Rainbow Lounge during the incident, which ended in the arrests of seven people and the hospitalization of patron Chad Gibson for brain injuries.

Witnesses have said Gibson, who was released from the hospital last Saturday, had his head slammed into a door by officers. He was reportedly in the custody of the ABC agents at the time the injury occurred.

The police department and Alcoholic Beverage Commission are conducting internal investigations and have called on witnesses to step forward with their stories. Fort Worth Mayor Mike Moncrief asked the U.S. Attorney General's Office to review the police department's findings.

The incident at the Rainbow Lounge has also led to the formation of a group called Fairness Fort Worth, which aims to bring together a coalition of community, civic and government leads to prevent such incidents in the future, according the Dallas Voice.

As Facing South reported earlier this year, violence against gay, lesbian, bisexual and transgender people often goes unreported to the police. Unfortunately, incidents like these in El Paso and Fort Worth do nothing to encourage crime victims to step forward.