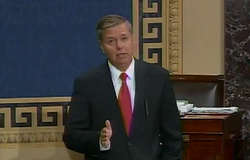 U.S. Sen. Lindsey Graham of South Carolina broke ranks with his Republican colleagues on the Senate Judiciary Committee yesterday to approve Judge Sonia Sotomayor joining the Supreme Court. The committee voted 13 to 6 in favor of Sotomayor's nomination, making it likely that she'll be the first Hispanic member of the nation's highest court.

All 12 Democrats on the committee voted in favor of Sotomayor, but Graham was the only one of seven Republicans to endorse her nomination. Sen. Jeff Sessions (R-Ala.) -- who led his party's tough questioning of Sotomayor despite his own problematic judicial nomination history -- said before the committee's vote that he opposed her because of her "liberal, pro-government ideology against the individuals asserting their constitutional rights."

Sotomayor's nomination is all but guaranteed to pass the full Senate, as Democrats hold a 60 to 40 majority and several Republicans besides Graham have said they plan to vote for her.

In his opening statement at the nomination hearings, Graham was critical of positions Sotomayor took as a board member of the Puerto Rican Legal Defense and Education Fund in favor of taxpayer-supported abortion, against the death penalty and in support of policies to encourage hiring of minorities. He also criticized her comment that a "wise Latina" could reach better conclusions because of the richness of her experience that a white man. But he said it was not those experiences that would ultimately determine his vote:

The question for me is have you earned the right to be here and if I give you this robe to put you on the Supreme Court, do I believe, at the end of the day, that you will do what you think is best, that you have courage, and that you will be fair.

Political observers have suggested that home-state demographics may have also played a role in Graham's stance on Sotomayor. As Facing South noted earlier this month:

It's clear that many of the GOP senators who toned down their opposition or came to  endorse Sotomayor come from states deeply affected by Latino immigration -- and where Latinos are seeing growing clout in politics.

Republican leaders are growing increasingly concerned over their party's appeal to Hispanic voters. In an interview with Tucker Carlson in this month's Esquire, former Florida Gov. Jeb Bush expressed his worries about the GOP's alienation of Hispanics:

...[T]he evidence is that after [the GOP] making major inroads, Hispanics have turned toward the Democratic party in the last two election cycles. Big time. Compare that to how my brother did and how I did and how other Republican candidates have done in the past and you can see a trend line that's quite disturbing.

South Carolina is among the states with the fastest growing Hispanic population. Other states with significant and growing Hispanic populations that are represented by GOP members of the Senate Judiciary are Alabama and Texas. While Alabama's Sessions and Sen. John Cornyn of Texas voted against Sotomayor yesterday, they softened toward her during the hearings, with Sessions declining to block the vote and Cornyn acknowledging the mainstream nature of the nominee's voting record.

On the Senate floor last week, Graham gave a speech in which he announced he would vote for Sotomayor when the Judiciary Committee took up her nomination. (The photo above is a still from that speech.) He talked about her qualifications, pointing to her "extraordinary" record of academic achievement, her 17 years of judicial experience and a record of following precedent, and said he hoped her selection would inspire young women -- particularly Latinas -- to pursue legal careers. He also noted that the court is unlikely to change much ideologically with her nomination, adding:

But time will tell. I'm not voting for her believing I know how she will decide a case. I'm voting for her because I find her to be well-qualified, elections matter, and the people who have served along her side for many years find an extraordinary woman in Judge Sotomayor, and I confirm their findings.

From prejudice to progress: The political evolution of Sen. Robert Byrd