By James Ridgeway, The Unsilent Generation 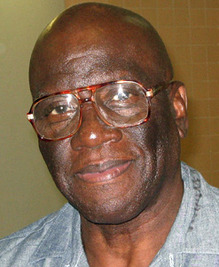 The Louisiana State Supreme Court Friday denied an appeal from Herman Wallace, who has been held in solitary confinement for more than 37 years. Wallace and Albert Woodfox are members of what has become known as the Angola 3, whose story I have been covering for Mother Jones. Convicted of the 1972 murder of a prison guard at the notorious Louisiana State Penitentiary at Angola, both men maintain their innocence; they believe they were targeted for the crime and relegated to permanent lockdown because of their organizing work with the prison chapter of the Black Panthers. Wallace, who is now 68 years old, was recently transferred from Angola to the Hunt Correctional Center near Baton Rouge, where he continues to be held in solitary. Two days ago, Wallace descended even deeper into the hole, placed in a disciplinary unit called Beaver 5 for unknown violations of prison policy.

Herman Wallace launched the appeal of his conviction nearly a decade ago. His lawyers have introduced substantial evidence showing that the state's star witness, a fellow prisoner named Hezekiah Brown, was offered special treatment and an eventual pardon in exchange for his testimony against Wallace and Woodfox. In 2006, a judicial commissioner assigned to study the case found that there were grounds for overturning the conviction, but Wallace's application was subsequently denied-by the state district court, court of appeals, and now by the Louisiana Supreme Court.

While every setback comes as a blow to a man nearing 70 who has spent nearly four decades in lockdown, one of Wallace's attorneys said tonight that this denial by the state's highest court came as no surprise, since it has a reputation for refusing to overturn the decisions of lower courts. Today's ruling opens the doors to a federal habeas corpus challenge, beginning with the Federal District Court for the Middle District of Louisiana at Baton Rouge. Here, if Wallace is lucky, his case will be reviewed by a fact-finding federal magistrate, and his conviction overturned by a federal judge. This is what happened to Albert Woodfox last year. Yet Woodfox, too, remains in prison-and in solitary confinement-as the state appeals the judge's decision.

Louisiana's Attorney General, James "Buddy" Caldwell, has stated that he opposes releasing the two men "with every fiber of my being," while the Warden of Angola and Hunt prisons, Burl Cain, has more than once suggested that the two men must be held in solitary because they ascribe to "Black Pantherism."

In addition to their criminal appeals, Wallace and Woodfox (along with Robert King, who was released in 2001), have a case pending on constitutional grounds. They argue that the conditions and duration of their time in solitary confinement constitute cruel and unusual punishment in violation of the Eighth Amendment. Their lawyers have submitted reports showing the effects of decades of solitary confinement on men in their sixties--including arthritis, hypertension, and kidney failure, as well as memory impairment, insomnia, claustrophobia, anxiety, and depression. The suit also argues that Wallace and Woodfox are being held in lockdown for their political beliefs, in violation of the First Amendment.

The 'Muhammad Ali of the criminal justice system' passes on