(Photo of Crystal Lee Sutton speaking in Minnesota in 1988 from the Crystal Sutton Collection.)

Crystal Lee Sutton, the woman whose life inspired the 1979 film "Norma Rae," about a brave union organizer, died of cancer on Sept. 11 after struggling in 2008 with her health insurance company.

Her insurer delayed her treatment by two months, initially by denying coverage of her medications, according to an article published last year in North Carolina's Burlington Times News.

Her untimely passing at age 68 speaks powerfully to the continuing debate over health care reform.

But it is the union movement that claims Sutton as a hero.

To honor her legacy, and to pay tribute to other courageous union organizers--famous and less so--we must push for the Employee Free Choice Act, which is pending in Congress.

Introduced in March by California Democratic Rep. George Miller, the act has been referred to the Committee on Health, Employment, Labor and Pensions. It has 227 co-sponsors, but the act must still move from committee discussion to general debate. This makes it critical that members of Congress hear their constituents' support for the Employee Free Choice Act now.

The act will level the workplace playing field and put the power to choose a union back where it belongs--in the hands of the workers.

Workers, increasing, have faced illegal discipline and even termination for attempting to organize their workplaces. The Employee Free Choice Act provides stronger protections for workers and tougher penalties for employers who engage in such illegal practices. The act will help rebuild the middle class and restore workers' power to bargain for a better life.

Passing this legislation would truly celebrate the life and work of Crystal Lee Sutton.

As her obituary writers have reminded us in the days since her death, in the early 1970s she was a 33-year-old mother of three, earning $2.65 an hour, folding towels at the J.P. Stevens plant in Roanoke Rapids, N.C., when she began the activism that would ultimately bring her fame. What motivated her? It was the low pay and poor working conditions at the J.P. Stevens plant that moved her to take a leadership role in trying to form a union there.

It was not an easy road.

She was shunned for her activism. "Management and others treated me as if I had leprosy" was the way she once put it in an interview.

After months of trying to organize workers, she made the move that helped create the big scene in the movie: She took a piece of cardboard and wrote the word "union" on it in large letters, got up on her work table and slowly turned it around until co-workers began turning off machines and giving her the victory sign. Quiet fell inside the plant.

The police were called to remove Sutton from the plant and she was fired. But the movement had begun.

Eventually, the Amalgamated Clothing and Textile Workers Union that Sutton helped organize represented as many as 3,000 workers at seven plants. And, in 1977, a court sided with Sutton, ordering that she receive back pay and be rehired. She went back to work at J.P. Stevens for two days before she left again to take a new job--union organizer.

All workers--women and men--owe Sutton a debt, and one way to pay it back is to vigorously support the Employee Free Choice Act.

A free choice means that workers would have the option of unionization if a majority of members sign up. The Employee Free Choice Act would also stiffen penalties for employers who fire organizers, shoring up the National Labor Relations Act, a document that hasn't changed in 75 years.

Just last year, more than 29,000 violations were upheld against employers in this country for harassment and intimidation during union organizing campaigns; in 2007 there were more than 30,000 violations. Workers should not be unjustly fired because they want to be represented by a union. There must be real penalties to deter this kind of behavior by corporations. This is important for all workers, but especially female workers. 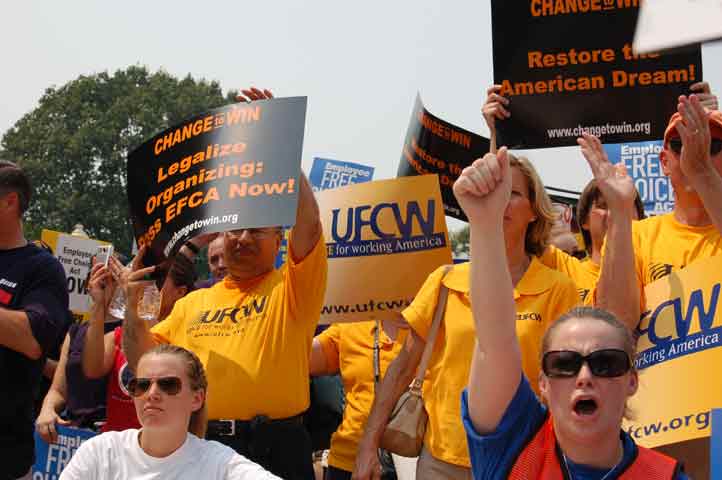 Liberalizing the rules for forming a union is particularly important for women because unions have proven their capacity to remove one of the most glaring inequities between the genders: unequal pay.

Union membership raises women's pay by more than 35 percent over that of non-union women.

The benefits of union membership for women in low-wage occupations are even greater, according to a December 2008 report by the Center for Economic and Policy Research, based in Washington, D.C.

For these women, union benefits make a huge difference in attaining and maintaining economic self-sufficiency.

No one should lose a job because they have to care for themselves or a loved one.

Union representation is one of the strongest predictors of family-friendly workplace policies like paid sick days. This is critically important for low-wage working women.

Sutton knew it, and we know it today.

To honor her memory, write or call your members of Congress. Let them know you want them to support the Employee Free Choice Act.

Let's stand up for working women.

(Images: Photo of Sutton speaking in Minnesota in 1988 from the Crystal Sutton Collection; Second photo is of UFCW members rallying for the EFCA.)

Gathering to honor the life of Crystal Lee Sutton, the real 'Norma Rae'

The AFL-CIO Debate and the South