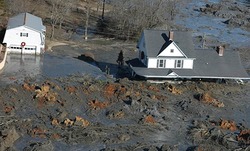 The U.S. Environmental Protection Agency still does not know the exact number of coal ash dumps at the nation's power plants, but it's moving ahead with plans to regulate them.

Those are among the findings of a report [pdf] released last week by the Government Accountability Office on the status of EPA's efforts to improve oversight of coal combustion waste. The GAO is an independent, nonpartisan watchdog agency that serves Congress.

The report was prepared in response to a request from U.S. Sen. Barbara Boxer (D-Calif.), chair of the Senate Committee on Environment and Public Works, and Rep. Edolphus Towns (D-N.Y.), chair of the House Committee on Oversight and Government Reform. Their request came following the December 2008 coal ash spill disaster from a surface impoundment at the Tennessee Valley Authority's Kingston plant in eastern Tennessee.

That spill (in photo above) covered more than 300 acres with toxic waste, destroyed three homes and damaged 23 others, damaged nearby roads and rail lines, and sent toxic pollution into the nearby Emory River. TVA has estimated it could cost as much as $1.2 billion to clean up the mess and take up to three years.

As of mid-September, the EPA had identified over 580 coal ash waste surface impoundments nationwide, GAO reports. A surface impoundment is a depression, excavation or diked area where the liquid coal waste is stored. Sometimes the solids in the waste are left to accumulate in the impoundment, while in other cases they are dredged periodically and taken to another disposal unit, such as a landfill.

Coal ash is also disposed of through minefilling, where it's dumped into abandoned mines. And a significant amount of the coal combustion waste produced at power plants goes to manufacture products such as cement and wallboard or structural fill for roads and other development, an application known under the law as "beneficial use."

Of the 131 million tons of coal combustion waste generated by U.S. utilities in 2007, 38% went toward so-called beneficial uses, 36% into landfills, 21% into surface impoundments and 5% into mines, according to the GAO. Between 2000 and 2006 alone, power companies reported dumping into surface impoundments and landfills coal ash waste containing more than 124 million pounds of six toxic pollutants: arsenic, chromium, lead, nickel, selenium and thallium.

Over the past 10 years, 26 facilities have reported spills or other unpermitted releases from a total of 35 surface impoundments. EPA has also identified 49 impoundments that have a high hazard potential rating, meaning that a failure would probably kill people.

The EPA is further assessing these potentially dangerous units. It's also considering whether to regulate the structural integrity of coal ash waste surface impoundments through wastewater discharge permits -- a move that came one day after three environmental groups announced they planned to sue the agency for failing to properly regulate such discharges.

The EPA recently completed a study of toxins in wastewater discharges from coal ash impoundments [pdf]. It concluded that current guidelines should be revised because of the significant toxic releases from impoundments and the likelihood that these will increase significantly over the next few years as new air pollution controls are installed.

The GAO report looked at federal oversight issues that still need to be resolved as EPA develops proposed regulations for coal ash waste disposal. It noted that while the Resource Conservation and Recovery Act of 1976 is the key federal law regulating hazardous waste, a 1980 amendment to the law sponsored by now-deceased Congressman Tom Bevill (D-Ala.) exempted coal combustion waste from RCRA.

EPA is considering several options for regulating the material:

* Regulating the waste as hazardous under RCRA Subtitle C. While supported by environmental groups, this approach is opposed by the industry because of the potential cost and complexity.

* Regulating the waste as non-hazardous solid waste under RCRA Subtitle D. This approach is supported by industry but opposed by environmental groups because EPA could not routinely inspect disposal sites or require permits and because the opportunity for public involvement in permits would be limited.

* A hybrid approach in which the material would be regulated as ordinary solid waste under certain conditions or a hazardous waste under others, such as designating wet disposal in surface impoundments as hazardous and dry waste in landfills as non-hazardous.

Lisa Evans, a coal ash expert with the environmental law firm Earthjustice, told the Charleston (W.Va.) Gazette's Coal Tattoo Blog that she had concerns about the hybrid regulatory approach, noting that dry disposal of coal ash waste also presents significant risks to health and the environment:


... [I]t would be a big mistake for EPA to leave landfilling entirely to the states. Current state laws are inadequate, and they will likely remain inadequate without EPA's hazardous designation.

EPA plans to issue its proposed rule on coal ash disposal next month.