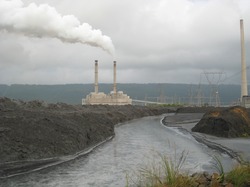 The U.S. Environmental Protection Agency announced yesterday that it plans to revise the existing standards for wastewater discharges from coal-fired power plants.

The news came one day after three environmental groups announced they intend to sue the agency for failing to properly regulate such discharges. Many of these releases come from coal ash ponds like the one that failed catastrophically last year at the Tennessee Valley Authority's Kingston plant in eastern Tennessee, an incident that released more than a billion gallons of toxic sludge into a nearby community and river.

According to the EPA's announcement:


Air pollution controls installed to remove pollution from smokestacks have made great strides in cleaning the air people breathe, saving lives and reducing respiratory and other illnesses. However, some of the equipment used to clean air emissions does so by "scrubbing" the boiler exhaust with water, and when the water is not properly managed it sends the pollution to rivers and other waterbodies. Treatment technologies are available to remove these pollutants before they are discharged to waterways, but these systems have been installed at only a fraction of the power plants.

Earlier this year, EPA completed a study of power plant waste discharges, concluding that  current regulations -- which date back to 1982 -- are not adequate to the task of protecting the environment from contamination. Once the new rule is finalized, EPA and the states would incorporate the new standards into plants' wastewater discharge permits.

On Monday, Defenders of Wildlife, the Sierra Club and the Environmental Integrity Project announced that they intended to sue EPA over its failure to set limits on toxic discharges from coal plants, which annually release millions of pounds of dangerous pollutants including arsenic, lead and mercury. The groups noted that existing rules do not set any limits on discharges of these metals, which can contaminate local waterways and leach into drinking water supplies, already threatened nationwide by toxic dumping.

A study released last month by the U.S. Geological Survey found mercury contamination in every fish it tested from nearly 300 streams across the country, with levels in 27% of the fish high enough to exceed EPA safety limits. The contamination is due largely to pollution from coal-fired power plants.

Jennifer Peterson, an attorney with EIP, said her organization welcomed EPA's promised regulatory action. However, the groups still plan to go ahead with their lawsuit to ensure there's a firm date by which rules are in place.

"EPA's plan to finally limit toxic discharges from power plants is great news," Peterson said. "It is also good to hear EPA acknowledge that these toxic pollutants 'can contaminate drinking water sources, cause fish and other wildlife to die and create other detrimental environmental effects.' But these rules are nearly 30 years overdue, and we need a deadline for regulation. That is what our lawsuit is about."

Last month EPA revealed that there are almost twice as many coal ash ponds nationwide as was previously thought. Those ponds -- some of which would present a deadly hazard to nearby communities were they to fail -- are concentrated in Appalachia, the Southeast, Midwest and Intermountain West.

At the same time, some power companies are still withholding information about their coal ash dumps, claiming it's confidential business information. They include North Carolina-based Duke Energy and Progress Energy as well as the Southern Co.'s Alabama Power and Georgia Power.

(Photo of a coal-fired power plant from the EPA.)