Ever since the Census Bureau's offbeat 30 second Super Bowl ad, there's been a lot more buzz about the upcoming 2010 Census count and the impact of an under-count in your state (which suggests that even if the ad wasn't great, it succeeded in getting people talking).

Hopefully Southerners -- and not just those in Who Dat nation -- watched the game and got the message, because history and current trends suggest the 13 states in the South are most at risk of not getting fully counted.

This will not only mean billions in desperately-needed federal funds for Medicaid and other programs, but will also skew the new political districts that will be drawn in most states after the 2010 Census wraps up.

To see just what the South stands to lose, let's go back 10 years to the 2000 Census. The Census Monitoring Board estimates that the official population count that year under-counted the U.S. population by about 3.3 million people.

Altogether, those "lost" people represented about 1.18% of the population, what they call the "under-count rate." [Here is a PDF copy of the Census Monitoring Board's final report to Congress about the 2000 under-count.]

Southern states may have suffered the most from under-counting in 2000:

* Of the estimated 3.3 million U.S. residents not counted in 2000, 39% were in Southern states. In other words, nearly two out of five of the "missing" residents were in the South. 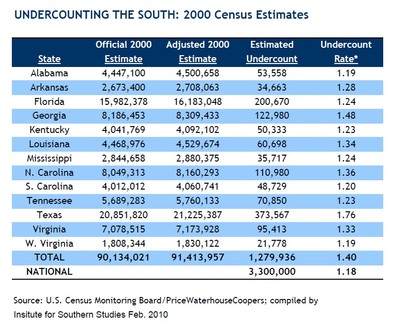 The economic impact is estimated to have been huge in some states. By 2012, Texas is projected to have lost over $1 billion from eight federal grant programs. Other big losers will be Georgia and North Carolina, who will each be shorted over $250 million in federal funding.

But more than money is at stake. After the 2010 Census numbers are released, political lines will be redrawn across the South through reapportionment -- the redrawing of Congressional districts -- and redistricting, changes states will make to their political boundaries.

An accurate count will be especially important to Florida, Georgia, South Carolina and Texas, all of which stand to gain at least one Congressional seat and Electoral College vote after 2010. North Carolina is on the "bubble" of states that could possibly gain a seat, and Louisiana is bracing itself to lose one after failures in the Katrina recovery led to population declines.

Heading into the 2010 Census count, Southern states are once again uniquely at risk of being under-counted and the resulting loss of political and economic clout.

Why is the South under-represented in the Census? Because it has high numbers of demographic groups that historically have high under-counts. These include:

The economic recession has made an accurate count even harder, not only by depleting state Census outreach budgets but also by causing people to become more transient, uprooted from lost jobs and foreclosed homes.

So how about that Super Bowl ad? Some criticized the $25 million price tag (couldn't CBS have cut them a better deal?). Census officials shot back that if just 1% of those watching the Saints/Colts contest (estimated over 100 million) were swayed to return their forms, it will save them $25 million in outreach costs.

Next week: How do we increase Census participation? We'll look at lessons from the ground in effective Census outreach strategies.