Skip to main content
Defend democracy in the South.
Donate Today
By Ajamu DillahuntFebruary 6, 2010
Ajamu Dillahunt is a long-time labor and community activist in the South, outreach director at the N.C. Justice Center and co-chair of the board of the Institute for Southern Studies. The following speech was given at a press conference for HKonJ, an annual march in Raleigh, N.C. promoting a state-wide progressive agenda. The march this year will take place on February 13. 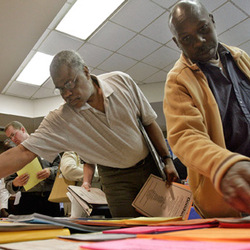 Communities across the United States are experiencing the most difficult economic times since the Great Depression. Our region in particular is suffering under the weight of joblessness, foreclosures and escalating incarceration rates.

Changes in the political landscape that led to President Obama's victory in 2008 have not translated into changes in the quality of life for many residents of our region.

The popular wisdom in the African American community says that when white America gets a cold, the black community gets pneumonia. Clearly what is a rough recession for the rest of the country is a Depression for African Americans. Black unemployment was 16.2% in December of last year in comparison to the white rate of 9%, a drop from November.

According to United for a Fair Economy, blacks earn 62 cents for every dollar of white income. Blacks have 10 cents of net worth for every dollar of white net wealth. Blacks are 3 times as likely to live in poverty as whites. Black unemployment in North Carolina is a frightening 14%, 5 points higher than that for whites. This last statistic is the basis for a "social state of emergency."

What we need to bring an end to the suffering is a public jobs program that pays living wages, provides training and offers sustainable employment. Billions of dollars have been spent to bring relief to the banking industry but not nearly enough has been done for the working families in our urban and rural communities.

We want a jobs program that provides funds for states, municipalities, non-profits and small businesses to immediately hire the long termed unemployed to do work that rebuilds our communities.

Weatherization, repair and rehabilitation of schools and other public facilities, daycare and other human services functions are examples of what the newly employed workers can do while helping local economies with the income and spending that has long been absent because of extreme joblessness. Tax incentives to small business that hire will not generate enough jobs at the rate they are needed.

Those lawmakers in Washington like the Congressional Black Caucus who have advocated a targeted approach to job creation have identified the best way to help those in greatest need. Communities with the highest rates of unemployment and greatest number of unemployed low income persons should receive a rapid infusion of federal dollars that will come from redirecting funds that were set aside to assist the financial institutions and increasing taxes on the wealthy.

We are asking that our Congressional delegation, along with our state and local officials join us in supporting legislation like the Put America to Work Act, HR 4268 that will create 1 million jobs. There are other initiatives like the Community Jobs Emergency Employment Program being advanced by groups like the Center for Community Change which calls for 2 million jobs over a two-year period.

And we call on our friends to support the efforts of coalitions like Jobs for America Now that call for an extension of unemployment insurance benefits and COBRA benefits, in addition to a robust jobs program. We are willing to work with state government in crafting projects that will utilize the funds from a public jobs program without displacing current employees.

Regrettably, the initial federal government efforts were aimed at Wall Street. More recently the target for support has been the so-called "Main Street." We would add to that a call for aid for "Martin Luther King Blvd" and "South Street."

Communities that were struggling before the recession have to be a priority if the entire state and nation is going to recover.

Ajamu Dillahunt is a Southern labor and social justice activist. He is a retired postal union leader and continues to work as a popular educator. His many organizational affiliations include the Black Workers for Justice, the Labor Network for Sustainability and the board of Fertile Ground Food Cooperative.