As we head towards April 1, 2010 Census Day (sidenote: whose bright idea was it to put it on April Fool's Day?!), the Census Bureau has launched a nifty mapping tool so you can see how many people in your area are mailing back their Census forms.

The national "mail participation rate" as of today is 34 percent. What does that mean? Out of the millions of forms the Census Bureau mailed out earlier this month and were not returned (because of vacancy, wrong address, etc.), that's the percentage of households that returned a completed form.

So how is your state doing so far? Here's a chart showing where states rank as of today: 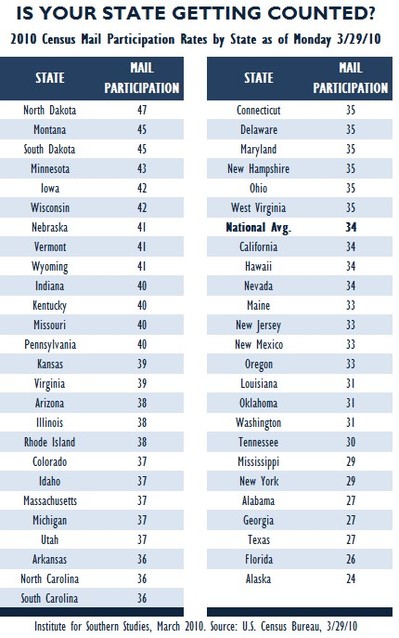 As you can see, states in the Upper Midwest/Great Plains are creaming the rest of the country. The highest-participating state, North Dakota, is getting counted at twice the rate of the lowest-ranked state, Alaska.

As a region, the South is falling behind, echoing our earlier analysis that the South ran the greatest risk of being undercounted in the 2010 Census. Seven out of 13 Southern states presently rank below the national average.

You'll notice that there are many more states above the national average than below it. How can that be? It's because some of the largest states -- including the four biggest, California, Florida, New York and Texas -- are all stalling in getting their forms back, pushing down the national average.

NEW MATH AT THE CENSUS AND WHY IT'S IMPORTANT

One important thing to know about this data: "Mail participation rate" is a new statistic, replacing the old "mail response rate" used in the last Census. What's the difference, and why the change?

But with the recent home foreclosure crisis, the Census Bureau realized lots of forms would end up at vacant or otherwise "bad" addresses, pushing down an area's "response rate."

So they created "mail participation rate," which looks at how many forms are mailed and don't get returned due to vacancies or other problems, and compares it to how many get mailed back. Under the new figures, if the Census mails 1,000 forms, 200 end up being vacant houses (a realistic figure for places with lots of foreclosures), and 600 forms come back, the response rate is now 75 percent (600/800).

The new math will boost morale in areas rocked by high foreclosures, ensuring they won't be penalized for lots of recession-caused bad addresses as they compete to get a higher rate.

The downside, though, is that it may artificially inflate the numbers and mask how much the housing crisis and recession are dampening response for the 2010 Census. Areas with a high "participation" rate may in fact be missing lots of residents who lost their homes, putting them at a higher risk of being undercounted.

That will make the second phase of the 2010 Census - door-to-door outreach - all the more important to ensure everyone is fully and accurately counted.

Tax Week: Who's coming to the tea parties?

Immigrants being held for Census count, then deported