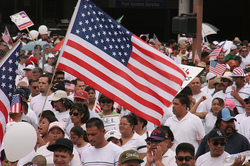 In 2008, two-thirds of Latinos in the U.S. voted for President Obama. That margin proved critical in states like Florida, where Latinos made up 14 percent of the voters, and 57 percent pulled the lever for the president-elect.

But barring an unlikely change, Republicans will soon be making the decisions about how growing Latino communities are politically represented in Florida and other key Southern states.

That's because the GOP controls many of the state legislatures in places where the Latino population is the largest, putting Republicans in the driver's seat for drawing new state and Congressional political lines in 2011, after this year's Census numbers are released.

Right now, the state legislatures in the three Southern states with the largest Latino population -- Texas, Florida and Georgia -- are controlled by Republicans, a reality that is unlikely to change in the GOP-favorable 2010 elections.

The following chart shows which Southern states have the biggest Latino population and how that sizes up against the control of the state legislature: 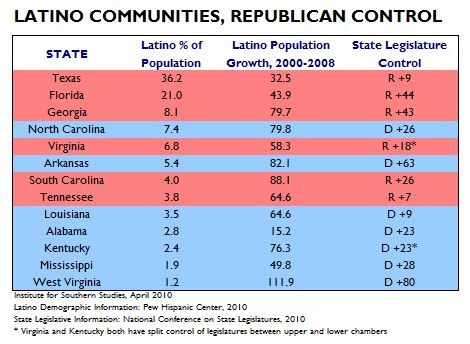 As you can see, the states with the largest Latino communities are more likely to see their state legislatures dominated by Republicans.

This will impact the political lines for both state districts and U.S. Congress. For state redistricting, only one Southern state -- Arkansas -- uses a separate commission to redraw political lines. That means the GOP-controlled legislatures in states with the biggest Latino populations will decide who wins and loses with the new maps.

The clear outlier: North Carolina, which has witnessed dramatic growth in its Latino communities, and has also seen its overall Blue-trending politics translate into a Democratic advantage in the legislature.

When it comes to redrawing U.S. Congressional districts, the irony will only deepen.

Four Southern states are projected to gain Congressional seats after the 2010 Census numbers are released: Texas (four seats) and Florida, Georgia and South Carolina (one seat each).

In each of those states, Republicans will almost definitely be in charge of deciding where and how those new Congressional seats are drawn -- even though a big reason those states are gaining Congressional clout is because of their fast-growing, Democratic-leaning Latino population.

Here's a chart from the New Democrats think tank showing how much states owe their rising Congressional clout to their growing Latino communities:

In other words, in Florida and Texas -- two GOP-controlled states -- over 50% of the reason they're gaining Congressional seats is because of their fast-growing Latino population. In Georgia and South Carolina, closer to 20% of their population growth is thanks to Latinos.

It's a classic case of demographic trends outpacing present-day political realities. As Facing South has taken pains to document, the South is rapidly changing. A glimpse of this change was seen in 2008, when one-third of the region's Electoral College votes went to the nation's first African-American president.

But at the moment, the South's political alignment reflects its past -- a reality that will shape the region's political future, due to redistricting and Congressional reapportionment, for at least a decade.

Concerns grow over voting rights for the South's language minorities