After years of inaction, federal officials are mulling new regulations to confront the growing problem of coal ash. But energy companies have fought off regulation before, and they're fighting the new rules every step of the way.

When the catastrophic coal ash spill occurred at the Tennessee Valley Authority's Kingston plant in 2008, a quiet debate over how to regulate coal ash had already been going on for decades, largely outside the view of the public or press.

That all changed with the Kingston spill, which aside from releasing a billion gallons of toxic waste into a nearby community and river system also pushed the problem of coal ash into the national spotlight and led to calls for change.

The month after the Tennessee disaster, EPA Administrator Lisa Jackson signaled during her Senate confirmation hearing that the agency would revisit the issue of coal ash regulation. "The EPA currently has, and has in the past, assessed its regulatory options, and I think it is time to re-ask those questions," Jackson said.

Jackson soon began to make good on her promise. The EPA launched an inventory of coal ash impoundments like the one that failed at Kingston, sending information requests to more than 160 electric generation facilities and 60 corporate offices. Armed with this and other data, Jackson and the EPA concluded that the nation's standards for regulating coal ash needed revision.

But the agency's efforts soon ran up against massive resistance from an array of powerful interests -- industries and groups that had succeeded in enabling coal ash to escape federal oversight for decades, creating a regulatory vacuum that many say made a Kingston-like disaster almost inevitable. 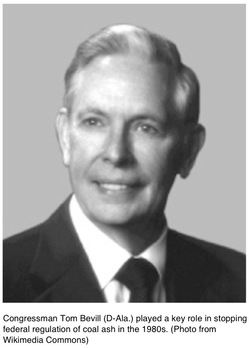 The battle over regulating coal ash goes back to 1976, when Congress passed the Resource Conservation and Recovery Act, the main federal law that governs disposal of hazardous and non-hazardous waste.

In the beginning, coal combustion waste was not included in RCRA, and in 1978 EPA proposed that coal ash be covered under the law as a special hazardous waste.

But before that happened, Congress passed the Bevill Amendment in 1980, which effectively exempted the coal waste from RCRA. The amendment was named for Rep. Tom Bevill, a 15-term Democratic congressman from coal-dependent Alabama who chaired the powerful House Energy Development and Water Appropriations Subcommittee. During congressional debate, Bevill declared that "it would be unreasonable for EPA to impose costly and burdensome regulatory requirements without knowing if a problem really exists, and if it does, the true nature of that problem." Bevill's amendment called on the agency to delay regulation and study the matter instead.

Congress' reluctance to regulate was reinforced when the EPA went on to release two reports -- one in 1988 and another in 1999 -- finding that damages from coal ash did not warrant lifting the regulatory exemption.

But in 2000, the agency began to change course. That year, as required by the Bevill Amendment, the EPA published a proposal titled "Regulatory Determination on Wastes from the Combustion of Fossil Fuels" that concluded federal regulations for the disposal of coal ash -- either under RCRA and/or the Surface Mining Control and Reclamation Act -- were necessary to protect public health and the environment.

"Public comments and other analyses . . . have convinced EPA that these wastes can, and do, pose significant risks to human health and the environment when not properly managed, and there is sufficient evidence that adequate controls may not be in place for a significant number of facilities," the proposal found. "This, in our view, justifies the development of tailored regulations under Subtitle C of RCRA."

In other words, the EPA was saying that it was finally ready to treat coal ash as hazardous waste.

The EPA sent its report to President Bill Clinton's White House Office of Management and Budget for review. An EPA employee involved in the internal debate told the Center for Public Integrity "it really hit a brick wall at OMB."

The administration was flooded with letters from electric utilities and visits from their lobbyists warning that regulating coal ash as hazardous waste would lead to economic hardship for them and their customers. New standards would increase the cost of disposing of coal ash waste, an extra cost the EPA estimated at about $1 billion per year. But industry representatives argued the cost would be astronomically higher -- perhaps upwards of $13 billion.

After the lobbying onslaught, EPA backed away from regulating coal ash as hazardous waste in 2000. But the agency promised to issue guidelines to help states oversee it more effectively -- a critical step, since most states lacked even basic safeguards for coal ash disposal sites.

But the EPA didn't follow through. And without federal guidelines, states continued with business as usual. Five years later, a report prepared for EPA's Office of Solid Waste found that most states didn't require monitoring the impact of coal ash disposal sites on groundwater, more than half didn't require liners, and more than a quarter didn't even require something as basic as dust controls at coal ash landfills. The report also found that most of the coal ash produced in the top 25 coal-consuming states could legally be disposed of in a way that directly threatened drinking water supplies in underground aquifers.

A consensus for regulation grows 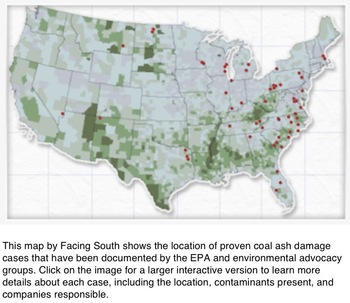 Meanwhile, even within the EPA, evidence was mounting that coal ash posed a growing threat to environmental and human health.

In 2007, a draft assessment was prepared for the EPA titled "Human and Ecological Risk Assessment of Coal Combustion Wastes" that found some unlined coal ash impoundments pose a cancer risk 2,000 times above what the government considers acceptable. The assessment found that the use of a composite liner -- a multi-layered liner like those required in municipal waste landfills -- significantly reduced the risk of exposure to health-threatening pollution. However, most states don't require such liners for coal ash impoundments.

That same year, a report by the EPA Office of Solid Waste tallied up the number of cases nationwide where coal ash was found to have caused environmental damage, documenting 24 cases of proven damages caused by coal ash and another 43 potential damage cases related to coal ash. Most of those cases involve toxic contamination from coal ash impoundments leaching into groundwater, rivers and lakes.

The EPA's internal studies were complemented by a growing body of research by independent scientists and advocacy groups documenting the environmental and health consequences of coal ash.

Earlier this year, for example, the Environmental Integrity Project and Earthjustice released a report titled "Out of Control: Mounting Damages From Coal Ash Waste Sites" that found serious water contamination problems from coal ash dumps at 31 locations in 14 states. The report noted that the contamination is concentrated in communities with family poverty rates above the national median.

Recently the EPA also acknowledged that toxic elements like arsenic, chromium and selenium can leach out of unlined coal ash dumps and into local water supplies in much higher concentrations than was earlier believed. After 20 years of using a testing method that the EPA's own Science Advisory Board argued was low-balling the contamination risk, the agency recently began using an updated test that found the level of toxic contaminants leaching into water clearly crossed the threshold for designating coal ash as a hazardous waste.

"These unregulated sites present a clear and present danger to public health and the environment," said Earthjustice attorney and former EPA official Lisa Evans. "If law and science are to guide our most important environmental decisions, as EPA Administrator Lisa Jackson has promised, we need to regulate these hazards before they get much worse."

But Washington's latest effort to regulate coal ash -- spurred by the TVA disaster -- has again met massive resistance from a familiar array of powerful political interests.

Last October, the EPA sent a draft regulation to the White House Office of Management and Budget. The proposed rules immediately became the target of a massive lobbying onslaught by electric utilities and energy interests determined to prevent coal ash from being regulated as hazardous waste.

The Charleston (W.Va.) Gazette reported that OMB held 30 meetings about the rules with industry officials compared to only 12 with environmental and public health groups. The intense lobbying campaign was notable because of the electric utility industry's already considerable clout in Congress: One of the most politically generous, it's contributed more than $9 million to members' campaigns during the 2009-2010 election cycle so far, according to the Center for Responsive Politics.

Joining the lobbying effort were state agencies and federal lawmakers who voiced concern about the cost of strict regulation and how it would affect the recycling of coal ash into products and its use as fill in construction projects.

Many of the congressional defenders of coal ash represent states where the toxic waste has been implicated in environmental damages. For example, a Facing South analysis found more than 50 proven and suspected coal ash damage cases in the states represented by the more than 90 senators and representatives who wrote to the Obama administration opposing the regulation of coal ash as hazardous waste.

As the political battle raged behind closed doors, the latest push to regulate coal ash seemed like it might again be derailed. The EPA originally said it would roll out a proposed rule for public comment by the end of 2009, but the release was postponed with the agency blaming the delay on the "complexity of the analysis."

The new rules were then supposed to be released in April 2010, but were put off again.

The agency asked the public to help decide which approach makes the most sense during a three-month comment period that will begin when the regulation is published in the Federal Register, which is expected to happen as soon as this week.

Environmental watchdogs expressed disappointment over the agency's equivocation. Eric Schaeffer, a former EPA official who now directs the nonprofit Environmental Integrity Project, said the move "sets up a boxing ring." However, he also said he sees value in moving the fight from behind OMB's closed doors out into the open.

"It's in the public arena now, and that's really important to move things along," he said.

TOMORROW: Dumpsites in Disguise? Coal ash doesn't just end up in dangerous dumps -- the waste is also used increasingly as building material and even as fertilizer for farm crops. It's called "beneficial use," but is it safe?

Sue Sturgis is an investigative reporter and editorial director of Facing South. This piece is the third installment in an in-depth, week-long series on the growing national problem of coal ash and the political battle over regulations. To read the entire series, click here.

Like our reporting? Please consider making a contribution to the Institute Investigative Fund. Thank you!