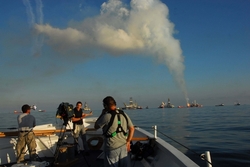 The U.S. Coast Guard has announced new procedures for the media to access federally imposed safety zones set up around the BP oil spill.

National Incident Commander Admiral Thad Allen issued a directive yesterday stating that the press must have "clear, unfettered access" to the disaster -- as long as there are no safety or security concerns.

"We need to discriminate between media which have a reason to be there and somebody who's hanging around when we know that we've had equipment vital to this region damaged," Allen said.

Last month the Coast Guard established safety zones around oil cleanup operations and booms in the Gulf of Mexico, reportedly in response to vandalism. It originally considered a 300-foot safety zone around response operations but ultimately established a 65-foot protected area. Violating the rule carries felony charges and a fine of $40,000.

The original rules required media to contact local authorities each time they wanted to access booming operations within the safety zone. Under the new policy, media representatives can obtain credentials to carry and display as needed for the duration of the response.

Gerald Herbert, an Associated Press photographer, was among the members of the media who raised concerns about how the original rules would impact coverage of the disaster.

"Often the general guise of 'safety' is used as a blanket excuse to limit the media's access, and it's been done before," Herbert told the New Orleans Times-Picayune. "It feels as though news reporting is being criminalized under thinly veiled excuses. The total effect of all these restrictions is harming the public's right to know."

Last week the National Press Photographers Association called on the Obama administration to reduce the safety zone, and also called for rescinding the ban on media speaking with clean-up workers. Meanwhile, the American Federation of Television and Radio Artists has begun collecting reporters' accounts of being denied access to cover the disaster.

Under the new policy, reporters can obtain the necessary credentials by providing their name, media affiliation and contact information to the Unified Area Command Joint Information Center at UACNOLAJIC@gmail.com. Those denied access to the disaster response can call the UAC JIC at (713) 323-1670 for assistance.

Three years after the BP disaster, an urgent call for feds to address health effects