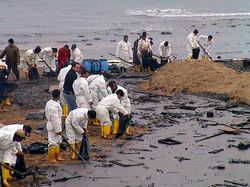 In attacking President Obama's response to the BP oil spill, Republicans and conservatives are echoing a criticism made of President Bush's handling of Hurricane Katrina: That he's not making use of generous offers of aid from other nations to clean up and recover from the disaster.

Is the criticism true? And how do Obama and Bush compare in drawing on the world's generosity after the respective calamaties?

First, the Katrina controversy. In December 2005, the watchdog group Citizens for Responsibility and Ethics in Washington made a Freedom of Information Act Request for all State Department documents related to offers of international aid in the wake of Katrina.

CREW released a report on the documents in 2007, and Facing South reported on their findings: In the four months after Katrina in 2005, the Bush administration accepted only $40 million out of $854 million in cash and in-kind offers from other countries -- about 5% of what was offered for the Katrina response.

That's significant because, despite the low percentage, money was the leading form of foreign aid Bush accepted after Katrina. A Facing South analysis of CREW's data [pdf] finds that about 60% of the countries whose Katrina offers were accepted by U.S. officials in 2005 consisted of monetary assistance; only about a quarter were offering non-money aid like medical supplies, and about 15% of countries offered both.

But much of that money wasn't collected, or was steered to non-government agencies like the American Red Cross or Bush-Clinton Katrina Fund.

At first Bush seemed to reject the very idea of foreign assistance, telling Good Morning America on September 1, 2005 that the U.S. would "rise up and take care of it." After howls of protest from Gulf leaders and the media, the Bush team changed its course publicly, but the data suggests the administration was still reluctant to make use of international aid.

THE ATTACK ON OBAMA

Is Obama making the same mistake?

The Republicans say so (although without mentioning the controversy with Bush and Katrina). On July 1, Rep. Darryl Issa (R-CA), minority leader of the House Committee on Oversight and Government Reform, released a scathing report [pdf] on Obama's BP spill response, including these key points:

The White House's assurances that there are adequate resources are at odds with the reality on the ground, where those on the frontline of the spill express significant frustration over the lack of assets. Local complaints are supported by the fact that the White House waited until Day 70 of the oil spill to accept critical offers of international assistance. [...]

The failure of Administration officials to quickly waive laws preventing necessary foreign assets from reaching the Gulf and other regulations are hampering efforts to clean-up and limit damage from the oil spill. Local officials feel the federal government is making the perfect the enemy of the good in cleanup efforts.


The implication that Obama had waited until "Day 70" to accept international aid isn't supported by the facts: As of June 15, the Deepwater Horizon Unified Command could point to "15 foreign-flagged vessels" that were part of the cleanup effort.

As for Rep. Issa's mention of "laws preventing necessary foreign assets," that refers to the Jones Act, a 1920s maritime law that stops foreign-flagged ships from from entering U.S. ports without permission, a homeland security measure.

About 10% of Issa's report is about the Jones Act, which has become a focal point for conservatives from Sarah Palin to Sen. John McCain who say Obama's failure to waive the act is proof he's not doing enough to make use of foreign assistance. James Carafano of the right-wing Heritage Foundation added an ominous backdrop of fealty to union bosses, claiming that organized labor was behind Obama's position.

In reality, the Jones Act has been a non-factor in the BP disaster response: Factcheck.org concluded that "the Jones Act has yet to be an issue in the response efforts," and an analysis by McClatchy newspapers called it the "GOP's false talking point."

Why? Because the Jones Act only applies to ports and state-controlled waters, the thin band of ocean which only extends three miles from the coast in Louisiana. That's why Mark Ruge, counsel to the Maritime Cabotage Task Force, a coalition of U.S. shipbuilders, operators and labor unions, says that attempts to blame the Jones Act are "[t]otally not true. It is simply an urban myth that the Jones Act is the problem."

Indeed, while fending off the criticisms in mid-June, former Coast Guard Adm. Thad Allen, who's leading up the BP response, claimed that "[t]o date, nobody has come for a Jones Act waiver."

Allen's claim wasn't exactly true: As acting Maritime Administrator David T. Matsuda testified at a Congressional briefing the next day [pdf], there was one case where a company requested a Jones Act waiver to bring in a foreign-built barge for oil cleanup. The waiver was denied, but that was because -- as the law demands -- officials were first required to see if there were any U.S.-flag barges that could do the same work; Matsuda says they were "able to locate many available equivalent U.S.-flag vessels."

However reasonable the explanation, the Obama administration was clearly sensitive to the criticism. For example, on June 15 Adm. Allen announced a new special procedure to streamline Jones Act waiver requests, even though only one had come up.

AID LEFT ON THE TABLE?

But even if laws aren't stopping Obama from drawing on international help, is the administration still doing enough to take advantage of it in the wake of the BP disaster?

On May 17, Obama said that some 17 countries had offered assistance, and they had taken advantage of several, as The Washington Post reported:

In late May, the administration accepted Mexico's offer of two skimmers and 13,779 feet of boom; a Dutch offer of three sets of Koseq sweeping arms, which attach to the sides of ships and gather oil; and eight skimming systems offered by Norway.

But many were still saying Obama's team was moving too slow. By June 29, the number of offers had risen to 30, and out of those the State Department said it was accepting assistance from 12, or about 30%.

Why only 30%? In a statement provided to Factcheck.org, the State Department gave four reasons for rejecting international aid:

* Equipment failed to meet US requirements/specifications (i.e. dispersant not on approved list/containment boom made of non-approved material)

* In one instance, the offering country's export laws prohibited delivery of the assistance

But another factor may be that is most of the post-BP disaster "aid" being offered by other countries, unlike that which came after Katrina, has come with a high price tag. An Associated Press story in mid-June cataloged the expectations:

Britain, America's closest ally and headquarters to London-based BP, said it would sell chemical dispersants and containment boom for use cleaning up the spill. London's mayor, Boris Johnson, has previously complained about what he called "buck-passing and name-calling" in the U.S. against BP.

China offered containment booms for a price. When a major earthquake struck in northwest China in April, the U.S. quickly gave $100,000 for relief supplies, and after another major earthquake in southwestern China in 2008, the U.S. donated $500,000 through the U.S. embassy in Beijing to the Red Cross to buy and deliver emergency supplies there. Congressional researchers estimate the U.S. spends roughly $30 million on foreign aid to China each year, including educational exchanges and health programs.

Israel, which receives roughly $3 billion in U.S. military aid and other assistance, also said it would send containment boom, if the U.S. paid for it.

France offered to send chemical dispersants and equipment to clean oil off birds but only for a price.

Kenya, which received more than $24 million in U.S. aid last year and $11 million in 2008 for humanitarian aid, offered to send fire boom but only if the Obama administration paid.

Vietnam offered a ship with oil-collecting sweep arms if the U.S. paid for it. The U.S. spent $102 million in all types of aid to Vietnam in 2008. When Typhoon Ketsana hit that country last fall, affecting 3 million people, the U.S. spent $100,000 on relief operations.

Romania made a "general offer of support" but asked the U.S. government for payment. After heavy rains sent in July 2008 sent four major rivers over their banks and killed five people, the U.S. gave $50,000 for emergency supplies.

Croatia offered to send technical experts and plans, for a price. The U.S. gave Croatia $50,000 to buy local firefighting equipment in 2007 when more than 800 wildfires broke out during an unusually hot and dry summer.

So how do the Bush and Obama administrations compare in drawing on offers of international disaster assistance?

Critics are wrong in saying Obama's team accepted no aid in the early weeks after the disaster, but may have been right in saying the Obama team could have done more. Indeed, questions raised by the media and conservative critics appear to have spurred the administration to ramp up its engagement with other nations.

But so far, the evidence is equally clear that Obama has shown a greater willingness to accept the smaller number of offers of international assistance it has been given than the Bush administration did during Katrina.

In the coming months, we'll have a much clearer picture about which pledges of aid were used and how useful they turned out to be. And the Obama administration seems determined to show it's aggressively responding to the world's offers of support; as the government's Deepwater Horizon Response website boasted on July 5:

Has the Gulf oil disaster fallen off America's radar?